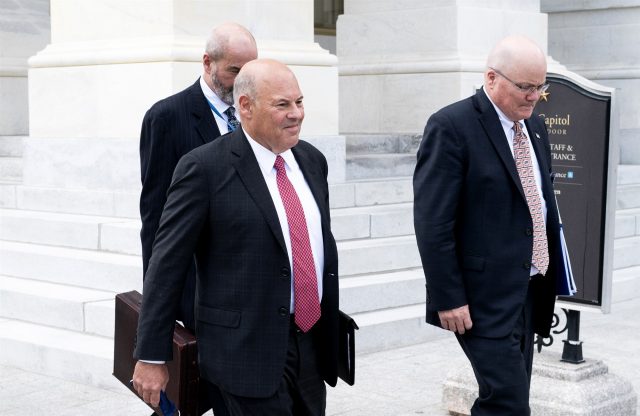 The U.S. Postal Service will suspend any policy or operational changes until after the November presidential elections, Postmaster General Louis DeJoy said Tuesday.

Critics claimed DeJoy was hindering the agency’s ability to accommodate an expected surge in mail-in voting, which he denied.

DeJoy, a close ally of President Donald Trump and a longtime GOP donor who was appointed in May, said he had come to the federal agency to make changes that would allow for “its long-term sustainability,” but he intended to delay those efforts as scrutiny of those practices grew — despite his view that the USPS needed a significant overhaul.

“In the meantime, there are some longstanding operational initiatives — efforts that predate my arrival at the Postal Service — that have been raised as areas of concern as the nation prepares to hold an election in the midst of a devastating pandemic,” he said. “To avoid even the appearance of any impact on election mail, I am suspending these initiatives until after the election is concluded.”

DeJoy said the hours of post offices would not change, mail processing equipment and blue mail boxes would not be removed, all mail processing facilities would remain open and the Postal Service would again allow overtime to be “approved as needed.”

The announcement also included DeJoy’s intention to expand the agency’s leadership taskforce on election mail to include members of postal unions and management associations.

This sudden declaration comes after DeJoy, a former logistics executive, faced intense scrutiny for nationwide shipping delays after he made a number of policy changes that included eliminating overtime and restricting postal carriers from doing additional routes to deliver mail on time.

Questions also rose over the removal of blue Postal Service mailboxes, as well as the decommissioning of 671 letter-sorting machines at Postal Service facilities, though those removals predated DeJoy’s appointment.

Nevertheless, the delays and the optics have roiled Democrats who accused DeJoy and Trump of hamstringing the agency in an effort to undermine mail-in voting. Postal workers across the country added their voices to the issue, asserting that the policies adopted by DeJoy — which he said are intended to cut costs and increase efficiency — have caused the holdup in deliveries that includes prescription drugs, Social Security checks and other pieces of essential mail.

Trump denied intentionally slowing the USPS, telling reporters Monday that he “encouraged everybody to speed up the mail, not slow the mail.” DeJoy, meanwhile, is set to testify before Congress later this week.

Concerns over the Postal Service’s ability to handle election mail grew when numerous states received letters from the Postal Service last week that warned them that the agency would not be able to fulfill requests for mail-in ballots.

The potential delays are a significant concern for many, as millions of Americans are expected to send in their vote via USPS this year because of concerns over the coronavirus.

DeJoy’s announcement came as Pennsylvania Attorney General Josh Shapiro and Washington state Attorney General Bob Ferguson, both Democrats, shared their intention to file lawsuits against the postmaster general over his policy changes. At least 18 states are involved in the lawsuits.

When asked by reporters about DeJoy’s announcement, both men laughed and said their lawsuits would proceed.

“I’ll believe it when I see it,” Shapiro said.“Hopefully the American people can breathe a sigh of relief, but I will not let my foot off the gas so long as the postal officials continue to violate the law through their procedural steps.”