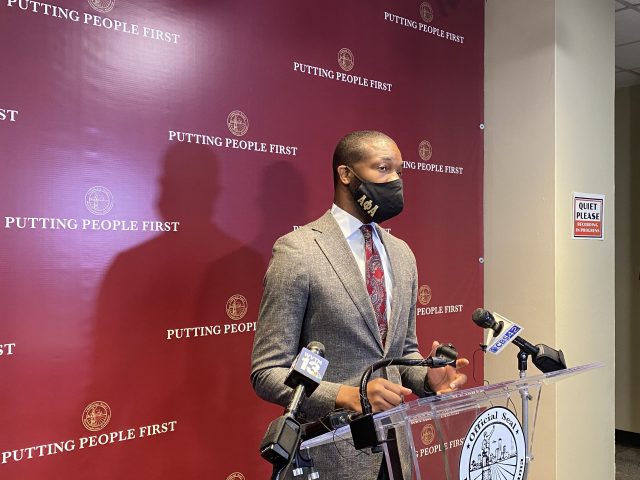 After a three-month delay due to financial concerns caused by COVID-19, Birmingham Mayor Randall Woodfin on Tuesday unveiled a proposed $412 million FY 2021 budget that addresses a $63 million shortfall with pay cuts for employees and boards and agencies and furloughs for 7% of the city’s workforce.

The budget’s spending priorities also reflect a commitment to investment in neighborhoods, infrastructure and financial sustainability, the mayor said.

The budget normally goes into effect July 1, but with the delay the fiscal year will begin October 1.

The mayor, who said he would take a 10 percent pay cut, told the City Council during its regular meeting that “difficult choices” were needed to balance the revenue shortfalls with essential services for residents.

“These are difficult choices to make,” he said. “Our employees are our greatest asset and we are thankful for their service. But we must remember our duty is to the people who make up the 99 neighborhoods of Birmingham. These actions ensure no reductions take place in the basic services the city provides to the people.”

And, the spending plan reduces funding to various non-city boards and agencies by $12.6 million, reduces funding for economic incentives by $1.7 million and find savings in debt restructure by $3.8 million. Under the plan, the city would transfer $23 million from its budget surplus to make up the remaining shortfall.

Furloughed employees, Woodfin said, will get to keep their benefits, including health insurance and their pension for at least three months, but the decision was one that he said “hit home.”

“I was a city employee for eight years,” said the mayor, who worked in the city’s law department. “These are people, they have families, lives. It’s heavy, it’s emotionally heavy and its nothing to make a light decision around. We’re going to give our employees an ample notice of when and we’re going to make sure there is enough . . . and make sure the immediate things they need to know is they will not lose their benefits… investments are still there.”

City-owned facilities received reductions as well. For example, the Birmingham Civil Rights Institute is proposed for $750,000, which is $250,000 less than the $1 million in the FY20 budget.

However, the proposed budget for police will eliminate 48 current vacant sworn officer positions as part of the overall effort to eliminate vacant jobs.

“The priority has not changed even in a year that taxes are lowered, the city of Birmingham is still committed to neighborhood revitalization, still significant money being put into paving streets, blight removal, weed abatement and other things,” Woodfin said. “It is important as an administration that we do not deviate.”

The plan also continues key initiatives including the Birmingham Promise, Birmingham On Demand (VIA), and also prioritizes a deferred maintenance program for city facilities and an investment in the city’s fleet.

“Citizens will continue to see paving of streets, potholes being filled, picking up trash, they will notice more blight removal, weed abatement and grass cutting, they will notice the things they carry about the most,” Woodfin said.

For more information on the mayor’s proposed budget, visit www.birminghamal.gov/2021budget.

Information and resources are available for city of Birmingham staff at www.birminghamal.gov/furlough.