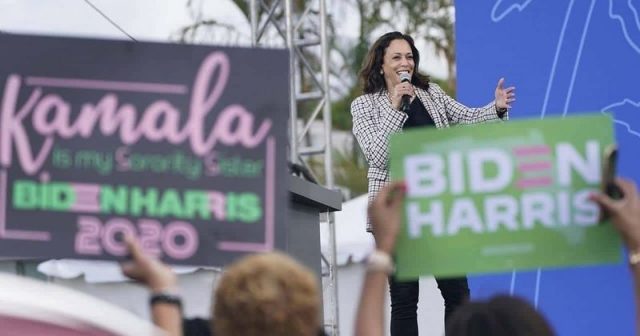 Alpha Kappa Alpha Sorority, Inc., is celebrating Kamala Harris, one of its members, for her historic election as the next vice president of the United States.

The vice president-elect joined the organization during her time at Howard University, a Historically Black College and University (HBCU). The daughter of Jamaican and Indian immigrants, Harris is the first Black woman, South Asian American and HBCU graduate to be elected vice president in the U.S.

“We call her sister, and now the nation calls her Madame Vice President!” read a statement from the sorority’s official Twitter account on Saturday. “Congratulations to America’s first female, first Black, and first South Asian vice president-elect Kamala Harris. You represent the new face of political power and continue to be a barrier-breaker.”

Harris studied political science and economics at Howard and joined the sorority during her senior year, in the spring of 1986. Founded in 1908, Alpha Kappa Alpha is the nation’s oldest Black sorority and is part of the Divine Nine – nine Greek-lettered Black sororities and fraternities that have been active in social causes, service and activism since their inception.

Elaine Witter, one of Harris’ sorority sisters and college friends, described the vice president-elect to The Washington Post in August as “the person who would come into the room and she would say, ‘what needs to be done?’”

“She was very task-oriented, very focused and she wasn’t afraid to work hard,” Witter added.

Lorri Saddler, also a sorority sister of Harris, previously told HuffPost that Harris had continued to be a supportive sister in the sorority and that her run for vice president has helped put the significance and history of HBCUs and the Divine Nine in the national spotlight.

In her memoir, “The Truths We Hold: An American Journey,” Harris reflected on her time at Howard, writing that students felt empowered that “they could be anything.”

“That we were young, gifted, and black, and we shouldn’t let anything get in the way of our success,” she wrote.

The Divine Nine organizations released statements on Twitter celebrating Harris after Joe Biden was elected the 46th president of the U.S.

The official Twitter account for Delta Sigma Theta Sorority, Inc., released a statement celebrating Harris’ win while acknowledging the Black women who organized to help get Biden and Harris elected.

“Black women organized and undeniably helped to drive and steer voters’ consciousness toward the joyful hope and humanitarian reset necessary for the ‘soul of our nation,’” the statement read.