BBBB is a 501(c)(3) organization dedicated to supporting individuals with breast cancer, as well as providing education and promoting early detection of breast cancer in minority, low-income, and underserved communities. To learn more about BBBB, visit www.brendasbrownbosombuddies.org.

Here are just a few of the inspiring stories from survivors who attended this year’s Sistah Strut. 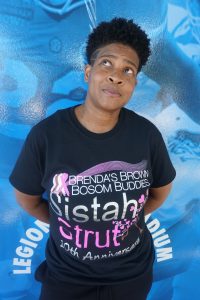 Ausiliah Jenkins, 50, rocks a haircut with tiny coils and kinks. In 2014, when she was diagnosed with stage 2 cancer, the then-43-year-old couldn’t have imagined wearing the hairstyle.

“After my first [chemotherapy] treatment, [an aggressive type of chemical drug therapy designed to destroy cancer cells in the body], I felt something tingling,” she said. “I started combing my hair, and it was just coming all out.”

According to breastcancer.org, “hair loss or thinning is a potential side effect of some breast cancer treatments, including certain types of chemotherapy [and other treatments, which] can cause very different types and amounts of hair loss (which doctors call ‘alopecia’).”

After viewing half of her hair in clumps in the sink, Jenkins made the decision to “shave it all off.”

“I took a straight razor, got in the shower, and shaved it all off. It took me a month to show my little bald head.”

It took two biopsies—a procedure that involves the removal of tissue for the purpose of examining cells to determine the presence or extent of a disease—to figure out what the “little pebble” was under her armpit.

“The [doctor] had to go a little deeper for the second [biopsy],” Jenkins recalled. “When they finally told me I had cancer, my mouth dropped to the floor.”

“I picked my mouth back up and said, ‘Alright, what we got to do?’ The following week, I had my first operation,” she said.

After the success of her treatments, Jenkins noticed that her hair started to grow back so much thicker.

“It’s crazy to see the drastic change that happens when you go through something that makes you lose your hair dramatically like that,” she said.

Jenkins now considers herself a “soldier cancer survivor,” and she has no problem talking about her experience and giving credit to her “major support system.”

“I am part of a good church, [First Cumberland Presbyterian Church in Birmingham], that has my back,” she said. “I have my husband, [Phil], of more than 24 years, and my [two] children. All three of them were constant motivators to keep me going. If I didn’t have them, I don’t know if I would have made it through the way I did.” 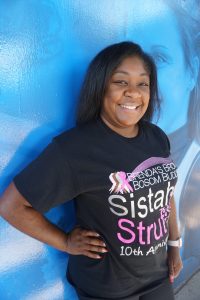 Carmela Walker: “I was gonna beat this”

“Listen to your body,” is the biggest piece of advice that Carmela Walker, 35, said she would give to someone struggling with a cancer diagnosis.

“You know yourself better than anybody,” she added. “If you feel like something is wrong, don’t ignore your feelings.”

In May 2018, the then-32-year-old Walker was dealing with a stage 2 cancer in her right breast that was “about 10 centimeters deep.”

According to Susan G. Komen (komen.org), the largest breast cancer awareness and advocacy organizations in the United States, “Tumor size is strongly related to prognosis (chances for survival). In general, the smaller the tumor, the better the prognosis tends to be.”

One evening when Walker was taking a shower, she discovered a lump in her right breast. The next day she sought counsel from her mother and was advised to make an appointment with her OB-GYN.

“After struggling to get an appointment for three days, I finally got one,” she said. “At first, [the doctor] told me it was nothing. … I said, ‘Oh, no no! This is something. This is too hard to be nothing. … It’s too big to not to pay attention.’

Eventually, the physician came in and told me she believed it was stage 2 breast cancer.”

Three weeks after being diagnosed, Walker began chemotherapy that lasted for five months.

“After my first treatment, … my hair started coming out,” she said. “One day, I had a head full of hair. The next day, I woke up and [my] hair was coming out.”

Walker, a West End High School graduate and aspiring nurse, said she will “never forget” the nurse who stood by her side through treatment. Her nurse was also a breast cancer survivor.
“She cried with me. She [told me], ‘If I can beat it, you can beat it. … We’re gonna make it through this together,’” Walker said.

The next step in her battle was undergoing radiation treatments, which involve the use of “high-energy rays or particles to destroy breast cancer cells,” according to the American Cancer Society (cancer.org). While undergoing this therapy, Walker motivated herself.

“I was crying all the time,” she said. “I had to eventually stop feeling sorry for myself and get it together. I was gonna beat this. [I said to myself], ‘I’ve got to pray. I’ve got to get this done.’”

Walker, who is now heading into her third year of being cancer-free, said she is “good and healthy.” She takes vitamins and other medicines to maintain her health and is looking toward the future—with a goal of completing her studies and earning a nursing degree from the University of Alabama at Birmingham (UAB). 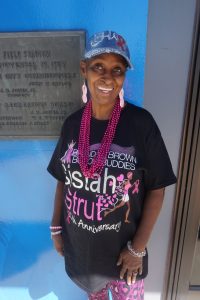 Janet Ware: “My mission is to help others”

Before being diagnosed with stage 2 breast cancer, Janet Ware, 69, participated in breast cancer awareness walks to support others.

“I knew of people that had breast cancer, and I wanted to support them,” she said.

Ware would get a mammogram every year, and one year her doctor came back with results described as “complications” raising suspicions of breast cancer. She was told to take a prescription hormone to control any suspected cancer, and everything was fine for a while. After a year of taking the hormones, she went for another annual mammogram. As she was getting ready to leave, the doctor said, “I need you to stop you.”

Through an ultrasound and biopsy, the doctor revealed that Ware had a growth in her chest. She was devastated by the news: “I was boo-hooing.”

“When I was leaving my job, somebody offered to drive me home. … I just cried all the way home,” said Ware, who initially thought about death and dying.

“I didn’t think about any chemo,” she added. “I just thought that once you had breast cancer, that was it, nothing else. … Even though I saw other survivors, for me, personally, I thought I was gonna die.”

Devastated, Ware sought a second opinion, so she visited doctors at UAB’s Kirklin Clinic, a specialty designed super-clinic for outpatient medical care, and they recommended that she begin chemotherapy.

Ware started to lose her hair, but she didn’t get sick from the treatments: “I just felt really weak and tired,” she said.

“I asked the doctor, ‘Which [one] will I live the longer [with]?’ The doctor said, “‘It doesn’t matter. You have a choice,’” said Ware, who decided on a lumpectomy.

During subsequent radiation treatment, Ware relied heavily on her faith, family, and church members who would frequently visit and pray for her.

“I called my pastor,” she said. “The Bible says get the elders to pray for you, … so I asked the elders in the church to pray for me. I had one particular elder find me [at the hospital], so he would go to the church on my chemo days to the altar and pray for me. The whole time, my church, [First Cumberland Presbyterian Church in Birmingham], prayed for me.”

Now cancer-free, Ware wants to help others by sharing her story.

“It became my mission to help others, she said. “When I was diagnosed, I talked to some women that had helped me. Now, if I know of anybody that has [cancer] or even if I don’t know them, I’ll give them a card with my name and number.” 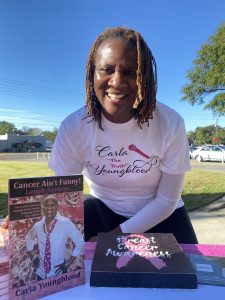 If it were not for her sense of humor, Carla “The Truth” Youngblood probably wouldn’t have been able to process her triple-negative breast cancer diagnosis in 2015.

According to the American Cancer Society (cancer.org), “Triple-negative breast cancer (TNBC) accounts for about 10 to 15 percent of all breast cancers. The term triple-negative breast cancer refers to the fact that the cancer cells don’t have estrogen or progesterone receptors and also don’t make too much of the protein called HER2. (The cells test ‘negative’ on all three tests.) These cancers tend to be more common in women younger than age 40, who are African-American, or who have a BRCA1, [an inherited genetic], mutation.”

“[Breast cancer] is a hard thing to deal with,” said Youngblood, 55. “If you have the right attitude and look at it from a different perspective, you can see the joy and laughter in the things you’re going through. That’s one thing I’ve learned, and [that’s one thing] I try to teach other people—You’ve got to learn how to laugh at yourself.”

The Birmingham native and stand-up comedian discovered swelling in her chest, and her intuition immediately told her it was cancer.

“I discovered it myself and went to the doctor,” she said. “I waited a few days because, in my heart and soul, I already knew it was cancer. [I told myself], ‘I’ve got to process it before I get to the doctor, so I won’t act a fool when I get there.’ I was getting my brain ready to deal with it.”

After a few doctor visits, it was discovered that Youngblood’s cancer was in multiple places in her chest, so she immediately began chemotherapy: “It was a very aggressive form of cancer, so we had to act quickly to shrink it down,” she said.

During her treatments, the Phillips High School and Birmingham-Southern College graduate said, “God was with me,” pointing out that she didn’t get sick at all from the prescription medications she needed to fight the cancer.

“[I] thank God for being with me as I was doing chemotherapy. … I ate before, during, and after chemo. I couldn’t stop eating.”

After toughing through 16 chemotherapy treatments, Youngblood had to undergo a double breast mastectomy, a surgery that is used to remove one or both breasts partially or completely. And she managed to take a humorous approach to the procedure.

“I had small boobs all my life. … Now, when they cut these out, I can get them as big as I want,” she said laughing.

Now cancer-free, Youngblood—a professional comedian for five years before her diagnosis—shares her breast cancer survivor story onstage during her stand-up routine. She also documented her experiences in “Cancer Ain’t Funny! Laugh Anyway …,” a book she published in October 2018.

“While I was going through treatment, I was writing and journaling about all the stuff that was happening to me,” she said. “Afterward, I did a stand-up comedy show [at the Carver Theatre for the Performing Arts in Birmingham] a year after I finished treatments.

“During that time, I said, ‘You know what, I’m gonna take these same jokes and translate them,’ [which resulted in the] expanded version of my story in the book. … That’s why I started writing and putting it all on paper.”

Youngblood, who is a sought-after speaker at breast cancer awareness events in Birmingham and across the nation, has encouraging words for anyone going through a cancer diagnosis or treatments.

You can learn more about Carla “The Truth” Youngblood, her standup, and her book at keepyoulaughing.com.