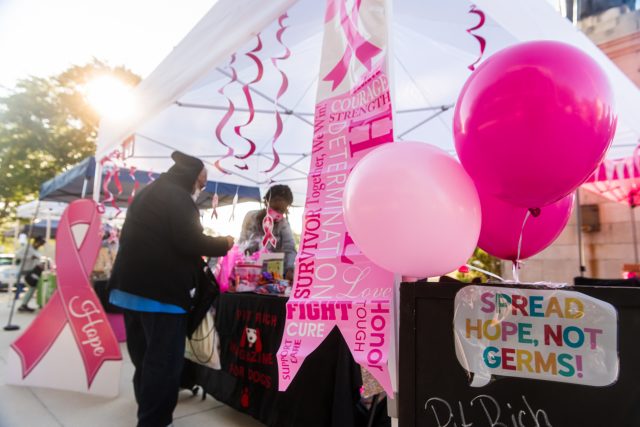 When Karen Jackson was diagnosed with Stage II breast cancer she was bewildered—not just by the diagnosis but by the disparity she saw between African-American women and women of other races and ethnicities.

“The disparities were alarming to me. In talking with other African-American women, I kept hearing the common experiences of unequal medical treatment and access,” she said.

In Jackson’s case, the diagnosis was the result of her proactive approach to health care. At age 35 she began getting annual mammograms because of her family history, and at age 50 an ultrasound revealed a 3.5-centimeter tumor that did not show up on the mammogram. Jackson said, “Fortunately, my persistence in requesting more testing helped save my life. I had insurance, so my situation was not quite as dire as it is for people who are underserved and don’t have insurance.”

Still, she saw that even with insurance the access to care was inadequate for African-American women. In fact, the statistics were nearly as frightening as the diagnosis. Fewer Black women were being screened and adequately treated—and more of them were dying.

What Exactly Is The Disparity?

Breast cancer disparity is complex and multifaceted. To begin with, Black women have a lower incidence rate but a higher mortality rate of breast cancer compared with their white counterparts. Translated, that means African-American women are less likely to develop the disease but more likely to die from it—a lot more likely, in fact.

But the disparity doesn’t stop there. African-American women are more likely to develop breast cancer at a younger age (under 50) and often have a more aggressive form of the disease called triple-negative breast cancer, which means the cancer does not express the gene for estrogen receptor, progesterone receptor, or HER2 that can stimulate breast cancers to grow—and therefore is immune to many of the targeted treatments that can be used to block tumor growth.

The blame doesn’t lie with just triple-negative breast cancer, however. More-recent research has found that Black women have a worse prognosis than White women regardless of breast cancer subtype.

The bottom line: African-American women experience a triple whammy when it comes to breast cancer—younger age at diagnosis, more-aggressive types of cancer, and higher mortality rates.

There is no simple answer to what lies behind the disparity, but it is most likely the result of both socioeconomic and genetic factors. Research to determine whether there is a genetic component to the higher rate of more-aggressive cancers and the younger age at diagnosis is ongoing.

In the meantime there are a variety of socioeconomic factors that may be contributing to the staggering mortality rate among African-American women with breast cancer—namely inadequate screening, inadequate treatment, and lack of access to treatment.

Abenaa Brewster, MD, MHS, associate professor at the University of Texas MD Anderson Cancer Center, explained that one of the key factors that contributes to mortality is a later stage of cancer upon diagnosis: 45 percent of Black women have cancer that has spread beyond the breast when diagnosed compared with 35 percent of white women.

“There is a lack of access to care,” explained Dr. Brewster. “So, even patients who get diagnosed may not get treatment. And among those who do get treatment, it is less likely to meet the standard of care. In other words, it is a systematic problem related to screening, access, and treatment.”

Indeed the databases that track cancer incidence, treatment, and outcomes do show different treatment patterns among women of different races. But a database doesn’t answer the question “why”? Why don’t African-American women receive the standard of care—sometimes referred to as “best practices”?

“Some people speculate that Black women don’t get best practices because they sometimes come in with more co-morbidities—such as hypertension, diabetes, or obesity—that may not permit them to get standard treatment,” Dr. Brewster said. “But I don’t know if that is the whole story. It may also have to do with poverty, lack of education, physician bias, or other factors. I really think it’s a problem on many levels.”

And Dr. Brewster is quick to note that databases don’t always paint the whole picture. “I might have an African-American patient who refuses chemotherapy, so she is going to show up in that database as not getting the standard of care—but it’s not because we didn’t recommend it,” she explained.

There is no question that a disparity exists. We know that African-American women are dying at a much higher rate from breast cancer—a disease that typically has a 95 percent survival rate. So, how do we change it?

According to Dr. Brewster, it is a matter of going after the “low-hanging fruit”—or the easiest problems to address. “We need to improve screening rates and get African-American women in for state-of-the-art treatment for breast cancer,” she said. “We know that the way we are treating breast cancer works. The survival rate is 95 percent. It’s just a matter of getting these women in for the right treatment.”

But how do you improve screening and treatment rates? And if it is so simple, why haven’t we done it yet? Dr. Brewster holds out hope that the Affordable Care Act is going to improve access to screening and treatment. “There is a big emphasis on prevention, so the expectation is that women should be able to get a mammogram,” she explained. “We hope to have better screening rates, and this might help with stage at diagnosis. And, hopefully, access to care will improve, and this will level the playing field and allow all women to be treated.”

Improved access is one piece of the puzzle—but how do you get women to take advantage of the improved access? “We can always do better with education,” Dr. Brewster said.

Sisters Network Inc. is a national organization with affiliate chapters in 44 cities and 22 states. “Our focus as a national organization has been to increase breast cancer awareness and educate the African-American community,” Karen explains. “We educate women across the country, through our affiliate chapters and through outreach organizations, and encourage everyone to be proactive and start screening early—even before the recommended guidelines due to the breast cancer mortality rate crisis.”

Education and awareness are critical. “Knowledge is power,” Jackson said. “And knowledge about what you need can be more important than money or insurance.”

Although all women are at risk for breast cancer, African-American women face unique risks that may require unique screening and treatment approaches. Jackson explained that Black women tend to have denser breasts, which can be a predictor for risk of breast cancer. What’s more, mammograms of dense breasts can be harder to read, making them less sensitive and increasing the risk of missed cancers. Supplemental screening with ultrasound in high-risk groups—such as those with dense breasts—has been shown to result in a higher cancer detection rate.

This is the type of lifesaving information that Sisters Network is determined to share in the African-American community. “We tell African-American women that they must be proactive,” Karen said. “They should start screening earlier and get a base ultrasound.”

Sisters Network educates women about follow-up, treatment options, and the benefits of going to a major cancer center for treatment. “We explain to women that they can survive breast cancer if they find it early and receive treatment at a quality cancer center. And all cancer centers are not equal,” Jackson said.

Because African-American women are more likely to develop aggressive cancers at a younger age, screening is imperative to catch cancers early, when they are most treatable

Sisters Network isn’t just educating Black women about the need for early screening—it is also removing the financial barriers that prevent some women from following through. Its Breast Cancer Assistance Program (BCAP) provides a variety of services to women in need, including free mammograms and lodging for women undergoing treatment.

Similarly, the Centers for Disease Control and Prevention has a program called the National Breast and Cervical Cancer Early Detection Program (NBCCEDP), which provides access to breast and cervical cancer screening services to underserved women in all 50 states, the District of Columbia, 5 US territories, and 11 tribes.

“Everyone should be entitled to the best medical care,” Jackson said. “It shouldn’t have anything to do with your economic status, where you live, or your ethnicity, religious affiliation, or social circle.”