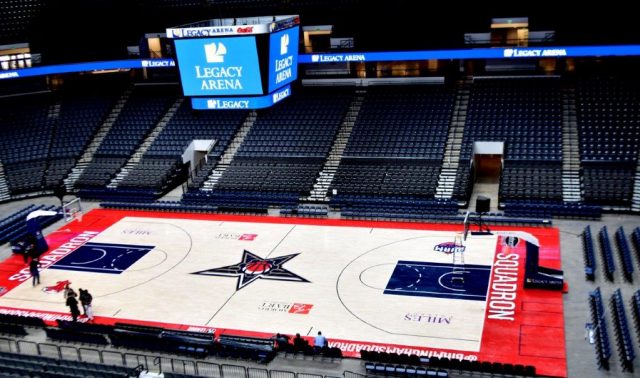 The Birmingham Squadron, NBA G League affiliate of the New Orleans Pelicans, will host a celebration of the life and legacy of Dr. Martin Luther King Jr. during its game against the Salt Lake City Stars at Legacy Arena on Sunday, January 16 at 2 p.m., one day before the national holiday for the Civil Rights icon.
The game will also be broadcasted nationally on NBA TV.
Bishop Calvin Wallace Woods, pastor of Shiloh Baptist Church in Norwood who stepped down last month as President of the Southern Christian Leadership Conference (SCLC) Birmingham chapter, will also be honored on the court during the Squadron’s game on Sunday.
Themed “Living the Dream”, the Squadron have partnered with the R.E.S.P.E.C.T Organization and the Birmingham Civil Rights Institute (BCRI) to put together the event to honor Dr. King and activists in Birmingham during the Civil Rights Movement in the 1960s and looks to use the celebration as an opportunity to inspire change in the future by educating each generation about our common past.
The Squadron on behalf of Gayle Benson, owner of the team as well as the New Orleans Saints and Pelicans, will also donate $10,000 along with a portion of the Sunday’s ticket proceeds to the BCRI.
“It is a privilege to be able to be a part of furthering the mission of an organization like the Birmingham Civil Rights Institute,” said Benson, “One of my main goals in bringing the Squadron to Birmingham was to connect the organization with the history and foundation of the community, and to make a difference. Obviously the Civil Rights Movement had such a large role in shaping this city, so my hope is that this contribution will help BCRI in its mission to educate and affect change in the community.”
To commemorate the work of so many activists in Birmingham that changed history, the BCRI will recognize Woods who participated in the March on Washington and co-founded the Alabama Christian Movement for Human Rights (ACMHR) along with his brother, Abraham Woods Jr.
The ACMHR was a pivotal piece of the fight for human rights in Birmingham, and the group was responsible for inviting Dr. Martin Luther King Jr. and Ralph Abernathy to the city to help lead mass demonstrations in 1963 that brought global attention to racial discrimination in the South. Their actions ultimately led to the prohibition of racial discrimination in hiring practices and public services throughout America.
“It is with a spirit of appreciation that we join the Birmingham Squadron and the R.E.S.P.E.C.T Organization in honoring the legacy of Dr. Martin Luther King, Jr. this Saturday,” said DeJuana Thompson, President and CEO of the BCRI. “We are pleased for the chance to present the BCRI Legacy Award to Bishop Calvin Woods for the many decades of service that he has committed to Birmingham and The Civil Rights Movement. This gracious contribution from Mrs. Gayle Benson will not just foster our mission to preserve and tell the civil rights story. These funds will advance the presentation of a special exhibit opening this summer at The Institute, showcasing the crucial advocacy of athletes throughout the Movement.”
Also part of the MLK Celebration on Sunday, American Idol star, Grammy Award nominee artist and Birmingham native, Ruben Studdard, will sing the national anthem. The event will also include postgame performances by award-winning gospel vocalists Beverly Crawford and Micah Stampley.
“We hope Sunday’s game is an inspiration to everyone who attends the event in Birmingham as well as everyone around the country who will be watching,” said David Lane, Squadron General Manager of Business Operations. “We know how important this history is to the city and to the state of Alabama, and it’s an honor to be a part of putting together this celebration of the life and legacy of Dr. Martin Luther King Jr.”