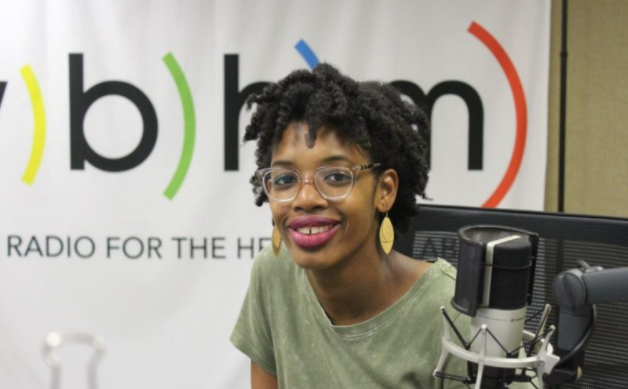 When I deliver the news, I try to be as straightforward as possible. But I still feel the emotion behind those stories. On days when the news feels particularly heavy, the sadness can weigh on my mind. I also get excited when I have something happy to report. Today, I have an announcement that brings up a swirl of emotions across that spectrum.

Janae has an incredible opportunity ahead of her. She’ll join WNYC, the NPR station in New York City, to host a new daily podcast. We are, of course, thrilled for her but also heartbroken to see her leave Birmingham. She’s a joy around the newsroom, and I’m sure you’ve come to love her voice on the air.

But before Janae skips out the door, she and I sat down to reflect on her time at WBHM and in the Magic City.

This interview has been edited for length and clarity.

AY: You came to WBHM and Birmingham in 2018. What do you remember about that time?

JP: It was June, and I remember going to the Pepper Place market. Now this is June. I’m coming from New Orleans, my hometown, and I’m like, this is a pleasant summer day! I don’t have a back sweat. It was great. Don’t get me wrong, It was hot, but it was pleasant. It kind of just set the tone, I believe, for my venture here in Birmingham.

As far as WBHM, I mean, the staff here really welcomed me with open arms. I was pretty nervous about filling the shoes of my predecessor, Esther Ciammachilli, who is awesome and still doing great things over a WAMU [in Washington D.C.]. But the news team embraced me and they helped me out in the onboarding process, and I just knew that WBHM would be a special place for me.

AY: What are your favorite discoveries in Birmingham from your time here?

JP: One of my favorite discoveries, a precious jewel, was Charlemagne Records in Five Points. It closed in 2019. Charlemagne just had this vibe, like even going up the stairs and into its space, seeing all the records there and the box fan sitting on the table. You know, it just had this great vibe. I really loved the place, really loved the owner and her staff. Everybody there was so passionate about music, just as I was. And so that was my safe space, and I would always be there not necessarily buying all the albums, but just taking a listen to some of them.

My second favorite place that helped me out on my dark days was Red Lion, the bar in Homewood. Red Lion kind of helped me through times when I was homesick or I was just going through family things or life things. Unfortunately, I’d sit at a bar and tell a stranger my problems [laugh].

And of course, Vulcan Trail was also another one. When the bar wasn’t open, I suppose. Vulcan Trail is also beautiful.

AY: You’re headed to WNYC, the public radio station in New York. What are you going to be doing there?

JP: I’ll be hosting a daily news podcast called “Consider This.” You may know the “Consider This” podcast that NPR has. In fact, this podcast is the same. This one is produced by WNYC and NPR, and it’s the first of it’s kind of podcast that brings listeners a mix of local and national stories based on the listener’s location. So NPR has teamed up with about a dozen larger NPR stations to bring sort of a localized “Consider This.” I’ll be hosting that and giving people the news. All things New York.

AY: Well, you’re from New Orleans. You’ve been living in Birmingham. How do you feel about heading north from the Deep South?

JP: I honestly love the cold. I’ve been sweating my entire life. I love winter fashion. So I’m looking forward to wearing turtlenecks and boots and not having that back sweat that we mentioned earlier. I’m also fortunate to be around some family up there. Since Hurricane Katrina my family scattered. So I can go anywhere and find a cousin. That’s the great part about it, getting to know my cousins and a little bit better and their children now as well. Looking forward to that.

AY: What are your favorite memories of living in Birmingham that you’ll take with you?

JP: Early on when I came to Birmingham I was in Kelly Ingram Park, just walking around and I came across Sarah Collins Rudolph. She was just there with her husband. For folks who don’t know, Kelly Ingram Park is right across the street from the 16th Street Baptist Church, where Sarah and her sister and three other little girls were at [in 1963]. Four of the girls died [in a bombing], including Sarah’s sister. But she was just  there. And we talked and I had no idea. That’s Birmingham.

I was at Linn Park and I was just talking to people and I met this lady who was one of the children’s crusaders. So it’s just stuff like that. It’s just like history is walking the streets of Birmingham, and it’s amazing.

As far as WBHM, there are so many great people. I talked about the staff here. But if you’ve ever worked with terrible people, you could attest that once you find great people to work with, it’s kind of hard to let that go. That’s why this has been kind of emotional for me. But I’ve gained some great friendships here and I hope to maintain those when I move to New York.

AY: It’s been a pleasure to have you here these last couple of years. We’ll miss you too. Best of luck.

Culinary professionals eat up discussion on food and civil rights

‘When Buses Were A-Comin’: Remembering The Freedom Riders 60 Years On