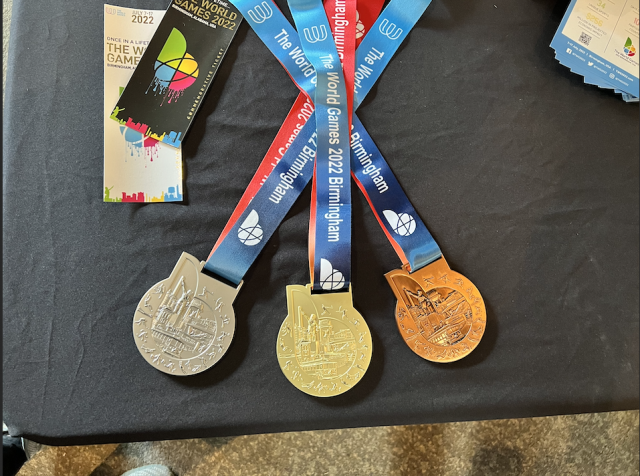 The World Games 2022 unveiled its gold, silver and bronze medals during a celebratory event Wednesday at the Alabama Sports Hall of Fame featuring three medal-winning Olympic and Paralympic athletes and a hype video.

In a scene reminiscent of a traditional medal presentation, the athletes took their places on a three-tiered medal platform and had the gold, silver and bronze medals placed around their necks by Ron Froehlich, the Honorary Life President of the International World Games Association.

Before the athletes stepped up on the platform, the crowd watched a 90-second hype video featuring fast-paced images of the sports that are part of the Games’ program. The theme that tied the video and the event together is “Step Up.”

“Just as athletes from around the world will soon step up to seize their moment of glory, this is Birmingham’s moment to step up on the global stage. Now that the Olympics are over, we are the world’s next, big international sports competition,” said Nick Sellers, CEO of The World Games 2022. “We are honored and proud to bring the world here for the first international multi-sport event with full venues since the pandemic. The world is clamoring to reconnect and we can’t wait to witness history as amazing athletes compete for these medals.” 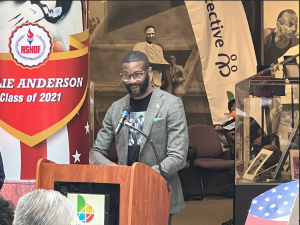 Birmingham Mayor Randall Woodfin said, “These medals will serve as an international symbol of excellence in athleticism and sportsmanship. As the mayor of Birmingham, hosting The World Games in our great city is our medal of honor. There will be many winners during the Games. Birmingham is certainly one of them.”

The World Games 2022 is the new generation of global sports competition and will feature 3,600 elite athletes from more than 100 countries competing for medals in 34 sports.  Organized with the support of the International Olympic Committee, the competitions in Birmingham will be the first time The World Games have taken place in the United States since the inaugural edition of the Games were held in Santa Clara, California in 1981.

In addition to thousands of athletes, an estimated 500,000 spectators will attend the competitions to watch incredible displays of competition and sportsmanship in softball, flag football, gymnastics, dance sport, sumo wrestling, sport climbing, parkour, drone racing and many more.

The athletes who modeled the gold, silver and bronze medals during the event all have Alabama connections.

The World Games 2022 will take place from July 7-17. To view schedules of the competitions and purchase tickets, visit www.twg2022.com.