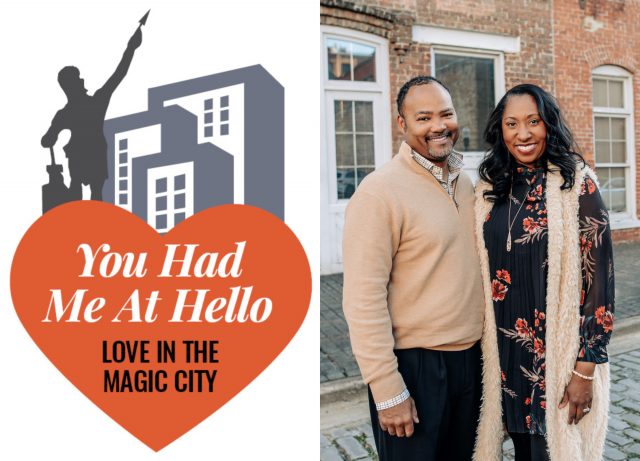 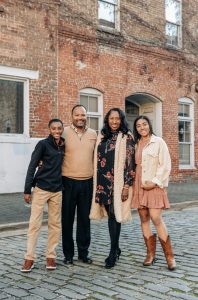 Met: June 1998, at a party in Tuscaloosa. Kimberly was a part of a social group for young Black professionals, and Kevin attended one of their events. Two of Kimberly’s exes were at the event, and she used Kevin as a decoy.

“I was on the dance floor and the other gentlemen were still trying to talk to me and I was trying to ward them off, so I said, ‘let me talk to this guy [Kevin], he looks like he could be interested in dancing, and I felt it was a safe bet to ask him,’” Kimberly said.

But to Kimberly’s surprise, “Kevin was being very handsy on the dance floor so I stopped dancing with him. And as I talked with the other girls that night, they thought he was very handsome and I was like, ‘girl no, he is not the kind of guy you want to date,” Kimberly laughed.

“I don’t know if I would call it handsy, but I was trying to dance as close to Kimberly as I possibly could,” Kevin laughed. “She was trying to get some space and would move back, and I would move a little closer to the point where she stopped and said, ‘you know what, I don’t think I’m going to be able to dance to this song.’”

A few weeks later mutual friends with invited them to a “party” … “We were the only two other people there besides them, it was a setup,” Kimberly said.

Afterwards, Kevin asked Kimberly if she wanted to go get something to eat. “I wasn’t as financially stable then as I am now, and to her surprise when we got to the car I gave her the Hardy’s coupon page and asked her to pick her combo,” Kevin laughed.

“We bonded over our Hardy’s meals, and exchanged phone numbers, and began to build a friendship,” Kimberly recalled.

First date: July 1998, at a Thai Restaurant in Tuscaloosa on the University strip.

“It was so sweet because Kevin had not ever been to a Thai restaurant and he ordered the fish, and it came with the head on it, and Kevin just sat there the whole time and told these stories about his childhood, and I realized that he just could not bring himself to eat the fish, but he was trying to impress me so he didn’t send it back,” Kimberly laughed. “We had such a nice time, and we also went and made pottery on our first date, which I thought was really sweet and sensitive.”

“I was beginning to thoroughly enjoy her company and picture her as the one,” Kevin said.

The turn: For Kimberly, it was in 2000, after her move to Nashville, Tenn. for grad school. Kimberly initially broke up with Kevin to focus on school and avoid having a long-distance relationship.

Kevin continued to come up on weekends to visit me. It seemed like [the distance] made our relationship continue to grow more, so we ended up getting back together,” Kimberly said.

“I don’t know if it was the absence that made the heart grow fonder, but it was also that I had gotten to a place where I wanted to be in a relationship with someone that I really did care about, and she was who I chose…I let her know this ain’t over. I kept going to see her,” Kevin said.

The proposal: November 2001, at Kimberly’s apartment in Nashville, Tenn.

“I was still living in Tuscaloosa and a very good friend of mine was in the jewelry business and he lived in Jackson, Mississippi and I had to travel there first to pick up the ring, and I grossly underestimated the time it would take for me to do all that and arrived hours late. When I finally did arrive it was 1 o’clock in the morning. She had a lot of questions, she wanted to know where I was, and what took me so long to get there. My plan was to take her to breakfast [and propose there], but about 2 a.m. it occurred to me that she wasn’t going to let this go. So I said, ‘ok, you want an answer, and I dropped to my knee and asked her to marry me. She was a bit taken aback, and she said ‘yes’.”

“I was so upset because all of this was happening in the midst of a storm, and I was worried. I had been crying because I thought that he had been in a car accident. So before he proposed, and he wouldn’t tell me where he had been after I had been so upset all night, I couldn’t believe it,” Kimberly said. “And then I learned that he had done so much in preparation for the proposal, the week before he had spoken to my mom and dad, and I was so touched by his gesture of love.”

Most memorable for the bride was being anxious about walking down the aisle. “Kevin and I had a thing that we said, ‘it doesn’t matter who’s there, as long as you’re there’ because I was nervous about walking down the aisle. We wanted a small wedding, but as we began to add friends and family that we wanted to be there it got bigger and bigger, and that [made me anxious],” Kimberly said. “And I remember when I saw him at the other end of the aisle and not seeing anyone else there, I just stared at him and went straight to him. and that was very relieving,” Kimberly said.

Most memorable for the groom was saying “I do. I anticipated being nervous, but I wasn’t at all. I was really calm and excited that this day was finally here. I remember as I looked down the aisle and saw her coming, I was thinking, ‘yes, this is it’… And when we got to the ‘I do’ part, I said it forceful and really loud, and it became somewhat comical to the Reverend. I just wanted to make sure that everyone in that church understood the depths of how much I meant my ‘I do,” Kevin said.

The couple honeymooned in Ocho Rios, Jamaica, and spent their first Christmas as newlyweds on the beach.

Words of wisdom: “Understand each other’s differences and embrace them because you’re not going to change them.  Some of the things you’re agitated by, and the attributes that each person possesses are what make them who they are,” Kevin said. “Embrace them and appreciate them for who they are…”

“You have to think about your relationship as a journey. We have said that we love each other more now than we did when we started because of all of the growth and change that has happened. Through the good times and the bad, what a gift to have someone to experience those moments with you,” Kimberly said. As we approach 20 years, we can honestly say that our love, over time, has grown and it doesn’t come without sacrifice and compromise.”

Happily ever after: The White’s have two children; daughter, Sidney, 15, and son, Joseph, 12.

Kimberly, 49, is a Tuscaloosa native, and George Walton High School [Marietta, GA] grad. She attended the University of Alabama [UA] where she earned a bachelor’s degree in early childhood and elementary education and a master of arts degree in administration. Kimberly obtained her doctorate of education from Peabody College of Vanderbilt University in Nashville, Tenn., and is a member of Delta Sigma Theta Sorority Inc., and elementary school principal at Harriette W. Gwin Elementary School in Hoover.

Kevin, 50, is a Tuskegee native, and Auburn High School grad. He earned a bachelor’s degree in psychology, with a minor in English from the University of Alabama and works as an oncology medical sales rep with Sun Pharmaceuticals.