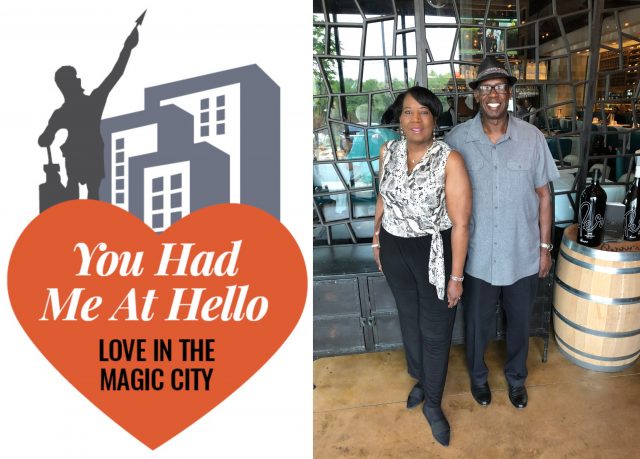 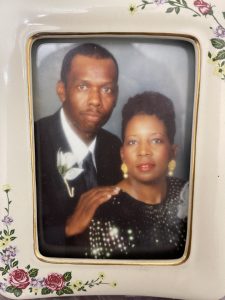 Met: Spring 1984, at Charlene’s apartment in the Glen Oaks community while planning a fish-fry fundraiser for their alma mater’s [Wenonah High School] reunion.

“At that time, I had a young son [Albert, then 3], and [Fernando] spent a lot of time talking with Albert, so I thought he must be a nice guy. [The planning community] was talking, but he was [paying special attention] to me and he seemed interesting,” recalled Charlene.

Fernando said, “To be honest, I was searching for somebody to date… we were young and I was ready for companionship and she was the one who caught my eye. You know how the dating game goes, we were young and happened to go to school together, and we were in the same class . . .”

“The fried chicken was so good he actually thought that I picked it up . . .,” Charlene said. “My mom was a cook and I picked up cooking naturally… [my son] Albert wasn’t there, it was the weekend and he was with his father. Fernando brought the wine and we listened to music and had good conversation sitting at the kitchen table.”

“She probably put something in that chicken to hook me because 34 years later I’m still here,” Fernando laughed, “she got me good.”

The turn: Winter 1984 at another class reunion fundraiser. “At one of the dances that we threw to raise money for the reunion, Fernando didn’t want me to dance with this other guy, and that was the night he got upset and everybody said, ‘oh that’s Charlene’s boyfriend now, he must be serious about her’,” Charlene remembered.

Much like high school, “other classmates of ours were dating when we were preparing for the class reunion and that brought me and Charlene closer,” Fernando said.

The proposal: Winter 1987, at Charlene’s mother’s home in Grasselli Heights.

“I killed two birds with one stone. I asked Charlene’s mother for her hand in marriage because her father had passed away and turned right around and proposed to her. I had the ring and I got down on one knee and asked her will she marry me, and she said ‘yes,’” Fernando said.

“I was really surprised he had the ring and was so prepared,” Charlene said. “He asked my mother for my hand and turned around and asked me to marry him. I said ‘yes’, and we stood up and hugged and kissed.”

The wedding: At the Bessemer Courthouse. “My best friend, Adriene Lee, was my maid of honor, and Donald Knox, was my husband’s best man. “I wore a light pink long lace dress and had a bouquet, and Fernando wore slacks and a dress shirt,” Charlene said.

Most memorable for the bride was deciding what to wear.  “I had been thinking about it for a couple of days, and that morning I woke up looking in my closet and couldn’t decide whether to dress up or dress down because I had never been married at a courthouse before…I decided on my lace dress. We had a small reception at my apartment in West End), his mother came, and it was nice,” Charlene said.

Most memorable for the groom was a reality check. “I went from being single and running around to being a married man, with a son,” Fernando laughed. “I was happy with my family.”

Words of wisdom: “Being married for 34 years comes with a lot of ups and downs, but you have to remember that it’s because you are two different individuals and you have to learn to compromise. He’s a man and I’m a lady, and even there you have your differences, so you have to be patient,” Charlene said.

“You have to have God in the mix, He is the reason we’re together. We can’t do nothing without him. I joined her church, Bryant Chapel AME Church in Grasselli Heights before we even got married to build a spiritual foundation,” Fernando said.

Charlene, 66, is a Grasselli Heights native, and Wenonah High School grad. She attended Miles College where she studied computer programming and Jefferson State Community where she earned an associate’s degree in early childhood development. She works for Birmingham City Schools as a parent involvement coordinator.

Fernando, 65, is a Bessemer native, Wenonah High School grad, and attended the University of Alabama at Birmingham [UAB] where he studied telecommunications. He served in the U.S. Air Force for 25 years and retired as a service specialist with the National Guard and has worked as a letter carrier for the U.S. Postal Service for 28 years.