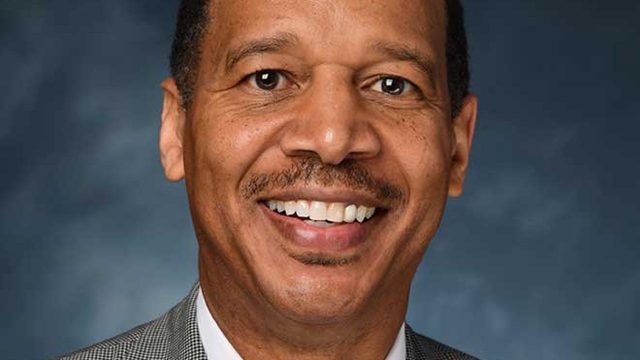 The way Michael Patterson, 1986 graduate of the University of Alabama at Birmingham, sees it, the money he has made throughout his lifetime is not his. Patterson, chief administrative officer at Blue Cross Blue Shield of Alabama, sees any earnings he has accumulated as a vehicle to help other people.

With that giving-back mentality top of mind, in the last two years Patterson has given $100,000 to establish two scholarships that will support students in the Collat School of Business.

“Michael Patterson’s generosity will have a lasting impact on underrepresented students in the business school,” said Eric P. Jack, Ph.D., dean of the Collat School of Business. “He is not only helping with the financial cost of their education, but also providing mentorship to these students, which is priceless. We couldn’t ask for a better example of our alumni boldly giving back to ensure others can reach their potential.”

Born in Brooklyn, New York, Patterson moved to his parents’ native Alabama when he was 11. After starting college elsewhere, Patterson transferred as a junior to UAB.

“It was just what I needed at that time,” Patterson said. “I needed to focus a little bit more. My teachers were very supportive and very engaging. With the support of my counselors and my professors, I took a tight schedule to graduate on time. They all helped me.”

During his junior year at UAB while majoring in accounting, Patterson got a job through UAB’s Co-op Office at Blue Cross Blue Shield.

“I didn’t know the difference between Blue Cross and the Red Cross,” Patterson recalled and laughed. “That shows how young I was.”

He worked 20 hours a week at Blue Cross while maintaining a demanding course load. In 1986, he graduated on time and, in four years, a goal achieved.

“My career exceeds my wildest dreams about where I could go,” Patterson said. “So, I wanted to give back. I realize how much of my story and my success really started at UAB.”

In 2020, Patterson chose to make his first gift of $50,000, establishing the OE Johnson Endowed Scholarship, which supports students in the Collat School of Business. It is named for his beloved grandparents, Oliver and Ethel Johnson, and honors his grandfather’s staunch commitment to education, even when society at the time would not allow him to achieve the education he dreamed of.

“He was one of the few Black men of his generation that I even knew went through high school,” Patterson said. “A lot stopped at the eighth grade. He loved education and encouraged his kids and grandkids to be educated. When it came to the name [of the scholarship], I thought about him. He didn’t have the opportunity I had, or that kids today have. It was a good fit for somebody who valued education and knew the difference it could make in one’s life.”

In 2021, Patterson gave another $50,000 and established the Patterson Family Endowed Scholarship, designated specifically for an underrepresented student in the Collat School of Business.

“I thought ‘If you did one, maybe you can do two,’” he said. “If you can help one, you can help two students.”

Both scholarships are part of the Blazing the Way Scholarship Program, a unique partnership that allows UAB students not only to receive a substantial scholarship so they can set aside financial concerns and focus intently on their studies, but also to establish a lasting relationship with the scholarship’s benefactor — including career advice, mentoring and opportunities for networking.

Inspired by the first recipient of the OE Johnson Endowed Scholarship, Cecily Mason, Patterson notes that her impressive story inspires him to be able to eventually create a third scholarship.

“It’s my way of encouraging young people today who may really want to go to college, and just don’t have the means,” he said. “Going to college is an expensive endeavor.”

Patterson hopes to help students who, as he once did, may feel like the underdog. UAB is a place for an underdog to thrive, he says — a place with a spirit not found at other universities.

“UAB is a special place to me,” he said. “The support I got wasn’t just from professors, but counselors — everybody. I’m just appreciative of it. The minute I walked on campus, people were there to help. There is a spirit of help, support, you can do it, encouragement — for me, I know I wouldn’t be here today if I didn’t transfer to UAB. That was the defining line for me. I’m so glad I went.”

Patterson’s hope for the recipients of the two current scholarships? First, to graduate from UAB. And when they find a job, Patterson hopes they will think of ways they can give back, too.

“If not at UAB, then maybe another community in which they live,” he said. “I want them to be examples for one another, to learn from one another, to graduate and give back in their own ways, wherever they may live.”