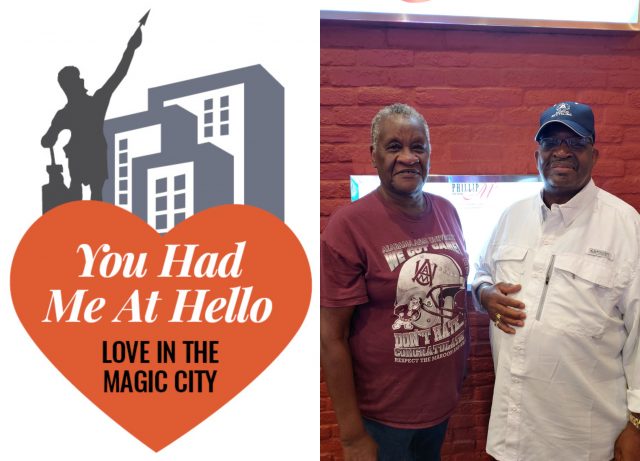 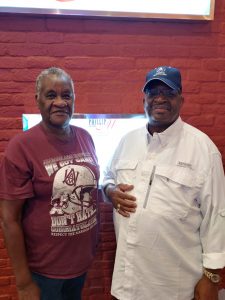 Met: Spring 1970, in Powderly, on Beverly’s sister, Mary Hall’s front porch. Beverly was dropping by her sister’s house for her nightly after work visit, when she noticed an extra guest on the porch.

“When I pulled up, I was wondering ‘who in the world is this man’,” Beverly recalled. She found out the man was “Joe” a friend of her sister’s “and she was setting me up on a blind date . . . Mary was pregnant at the time, so every night when I got off work I would go by there and check on her, and [that night] Joe was sitting on the front porch with her.”

The conversation between Beverly and Joe was short-lived because as soon as her sister Mary, went in the house, she got in her car and left.

“I left because I didn’t know him and didn’t want to sit on the porch and talk to him. …my sister called me that night to see why [I left] because when she came back on the porch I was gone and he was still sitting there,” Beverly laughed.

Joe also wasn’t aware of the blind date but got Beverly’s number from her sister.

“I called for about two or three months before I got a hold of her,” he said, “she traveled a lot.”

“I was young, just graduated college [Alabama A&M], had my first job [as a secretary at the Birmingham Urban League], and me and my girlfriends would just go places on the weekends,” Beverly said. “I was aware of him at that point, and that he had been calling, and he was a nice guy so we started dating.”

“He picked me up and we went on to the lounge, and they served food and drinks, and we sat there and ate and talked,” Beverly said.

“I just remember that I liked everything about her,” Joe said. “I liked how she had her hair made up, I liked that she was tall and slim, she had a nice figure and she was friendly.”

The turn: Christmas season, 1970. “We did a lot of activities with both our families during that time of the year,” Joe said. “Everybody grew a liking towards Beverly, and loved her, and the same with her family, everybody got along with me fine. One night we were all together and her brother looked at me and said, ‘I know you from somewhere’, and [turns out] me and him served in the Army together. We got the yearbook out and saw we was in the same unit,” Joe said.

“His mother planted the seed,” Beverly said. “She kept telling us that we need to be together every time she saw us together. [He would drive his mom to work and] he would make the wrong turn and come towards my house instead of going towards her job, and [his mother would] say, ‘well y’all just need to be together then’,” she laughed.

The proposal: April 1971, while on a date. The pair can’t remember where.

“We were out and we were talking, and we really liked each other’s company, we liked being together and Joe just said ‘let’s get married’, and of course, I said ‘ok’,” Beverly laughed.

“I believe my mind was saying ‘I don’t want her to get away’. I liked everything about my baby, especially that slim figure, I still call her ‘Slim’ now,” Joe said.

The wedding: At Bryant Chapel AME Church, in Grasselli Heights, officiated by Reverend J. T. Jamar. Their colors were pink and green.

Most memorable for the bride was “the whole day stood out to me because it was exciting,” Beverly said. “But at the reception when both sides of the family got together and everybody was mingling and having fun, and two families became one stood out to me the most.”

Most memorable for the groom was “when it came time to remove her garter, I remember pulling it off of them long legs,” Joe said.

Words of wisdom: “Never go to bed angry with each other because you don’t know what could happen through the night, and you’ll always remember those last words to each other. So, we try not to go to bed angry. Communicate, talk things out, and you can get any problems that you may have worked out,” Beverly said.

“I read somewhere years ago that where one is weak, let the other be strong so that you can work out the storms of life together. We talk about it and work out our problems and any other situation,” Joe said.

Happily Ever After: The Jones’s have two children; daughter, Laquitta, 46, and son, Joe II, 44, and ten grandchildren.

Beverly, 74, is a Grasselli Heights native, Wenonah High School grad, and attend Alabama Agriculture & Mechanical, where she earned a bachelor of science degree in secretarial science. She is retired from Southern Company as an executive assistant.

Joe, 76, is a Titusville/ Loveman Village native, and Samuel Ullman High School grad. He attended Lawson State Community College, where he studied business management, and is a retired welder at American Cast Iron Pipe Company [ACIPCO]. He served in the U.S. Army in the infantry department for three years.

They didn’t get to go on a honeymoon, so they’re traveling and enjoying each other and their grandchildren. “We even take them with us sometimes, all 10 of them. We’ve gone to Hollywood together, resorts, and Gulf Shores … That’s our station in life now, being good grandparents,” Joe said.