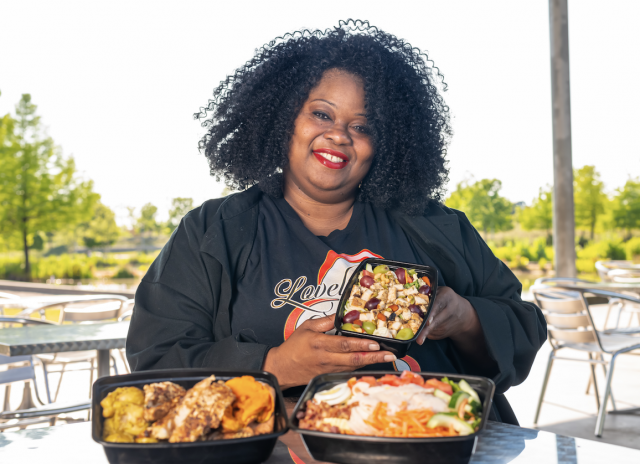 When her mother came home after being diagnosed with Type 2 diabetes, Kimberly Davis sprang into action.

“[My mother] didn’t want to be put on insulin. My dad has diabetes, and diabetes runs on this side of the family,” Davis said. “I told her, ‘Momma, give me 90 days, … we are going to get you healthier.’”

Davis, owner of Lovely Ladies Catering, based in Birmingham, began preparing healthier meals for her mother. Three months later, her mother went back to the doctor—and she had lost 30 pounds.

Her mom’s weight loss was an inspiration for Davis and led to Lovely Ladies Catering. The businessowner knows all too well the challenges and impact of weight gain.

Last year, Davis went to the doctor and was told that her A1C (a blood test for Type 2 diabetes and prediabetes that measures average blood glucose, or blood sugar, level over the three months) and cholesterol were high, and she had gained so much weight that she said to herself, “This can’t be me.”

Davis added, “During the pandemic, I gained 40 pounds. You know, everybody sitting around the house ordering take out and having food delivered. … I really set myself up for weight gain.”

Overeating had been a constant problem for the Birmingham resident and caterer. “If it was a hot link I would eat it,” she said. “If it was ice cream, I would eat it. Cookies, chips, … anything, I was eating it.”

By the time Davis was in eighth grade, she wore a size 18. Her mother took her to specialists and nutritionists for solutions, but none of those worked. She also tried exercise and weight-loss programs as an adult. Still, no change. By January 2021, Davis weighed 350 pounds.

“I knew something was wrong,” she remembered. “The way I was eating didn’t make sense to me. I really wanted to do something about it because my health was taking big hits.”

In March 2021, Davis visited a mental-health expert and was able to connect the dots after a few sessions—she was an emotional eater, eating the pain she had experienced as a child. The expert helped Davis discover how to deal with her depression and her weight. She also started a diet similar to the one she provided to her mother and lost 50 pounds.

“I knew that if my mom could do it, I definitely could, too,” Davis said. “It’s pretty much a mind over matter, and you just have to stay dedicated. My faith has also helped me during my weight loss [journey]. … There are times when you’re not going to want to go to the gym, but you’ve gotta think about the bigger picture.”

Today, Davis talks freely about her experience and stresses the importance of maintaining one’s mental health as well as physical health. As the owner of Lovely Ladies Catering, she cooks healthy meals for others and shares her weight-loss journey on social media.

“If you fix your mind, your body will follow,” said Davis. “My mission right now is full-body wellness—mind, body, and spirit. Do I still emotionally eat? Sometimes. But it’s nowhere near where it was.”

Davis, 43, grew up on Birmingham’s West side. “My mom cooked a lot of casseroles and made a lot of desserts. My dad always cooked on Sunday, or he would cook throughout the week, making different soul food meals, … frying fish when it was something special that he wanted. He made really good stews, too, so we definitely had a good time,” she recalled.

Davis traces her change in eating habits to a traumatic event in her childhood. “I was molested as a child on a playground,” she said. “As a kid you don’t really realize what happened to you as you got older. … I knew at the moment that something wasn’t right, but I didn’t have the knowledge or words to even express what happened to me. So, I kept the event to myself, and I ate a lot.”

“There are only a few people that can actually say they know that about me,” she added. “It was something I never really told anyone because I put it behind me.”

From grade school through high school, Davis recalled that she would “eat anything and everything.”

“The trauma caused me to eat my pain, and I was bullied a lot for being heavy,” she said. “My mom was trying to figure out what was going on with me, so she spent a lot of time taking me to specialists and nutritionists. It wasn’t working at that time because we weren’t getting to the core of the problem, … which was my experience on that playground.”

“I loved Parker,” she said, while wearing a t-shirt with the school’s mascot. Everyone that ever [attended] Parker reps the school hard. There’s just something about going to the first Black high school in Birmingham. You kind of feel that spirit and want to make something out of that.”

Davis graduated from Parker in 1996 and attended The University of Alabama in Huntsville (UAH), where she studied computer science.

In 1999, Davis returned to Birmingham after she heard about the grand opening of the Culinard Culinary School.

“My brother told me I should check out this new culinary school that was about to open in Birmingham, and I figured I would give it a try,” she said. “I had spent time in the hospitality industry working in four- and five-star hotels, and I would see a lot of the hotel’s chefs and watch what they would do. … It became something that I thought about doing myself.”

Davis graduated from the now-closed Culinard in 2002. During her time there, she met lifelong friends. “We got to cook all kinds of things, and I learned so many different cooking styles that I didn’t even know were possible,” she said.

Davis’s work in “high-volume hotels” would eventually lead to the establishment of her own business, Lovely Ladies Catering, in 2017.

“I had a friend from culinary school, and he kept pushing me to do it,” she said. “So, I finally did it.”

Davis advertised her culinary creations—creamy baked chicken, shrimp and grits, and more—on social media and attended expos throughout the city to spread the word about her company.

“It’s About Being Healthy”

While focusing on her business and her clientele, Davis also focused on herself and her health. Armed with the knowledge she acquired during her therapy sessions—that she was an emotional eater—Davis worked on addressing the stress in her life, particularly during the COVID-19 pandemic.

“Instead of talking about my feelings I ate them,” Davis added. “That was my problem: I ate whenever I felt stressed. … And I definitely felt stressed during the pandemic.”
Along with counseling, Davis’s doctor recommended physical therapy.

“I really had to get moving and get my muscle back,” she said. “At that point for me, it wasn’t about being skinny—it was about being healthy.”