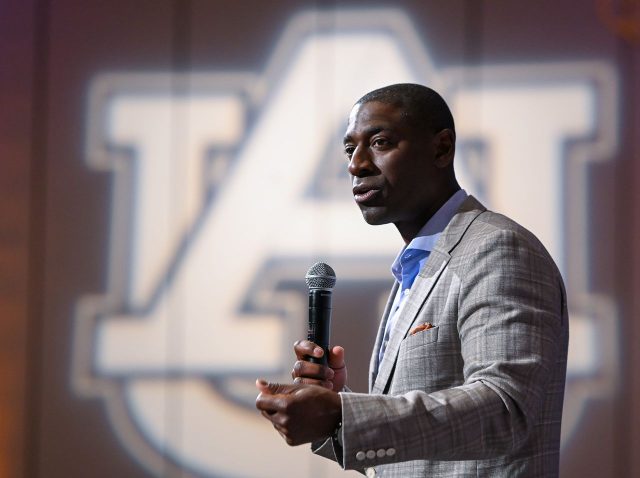 As the 2022-23 athletic year gets underway, Auburn will be in search of a new athletics director to lead the Tigers’ programs.

Auburn and athletics director Allen Greene agreed to part ways Friday, a source confirmed to AL.com. The two sides are going their separate ways with five months remaining on Greene’s initial five-year contract with the university.

“The decision to step away from Auburn Athletics is not an easy one, but it is the right time for me to begin the next step in my professional journey,” Greene said. “I am very proud of the work that we have done together to move our athletics program forward. Christy and I want to thank the Auburn Family for allowing us to be a part of something truly unique and I wish Auburn nothing but the best in the years ahead. I’m confident we leave Auburn Athletics stronger than when we arrived.”

Greene was hired as Auburn’s athletics director in 2018, tabbed by then-president Steven Leath to lead the athletics department. Greene’s five-year deal was worth $625,000 annually and was set to expire Jan. 31, 2023.

Greene’s future with the program has been in flux for some time, and this offseason did little to quell those concerns despite some preliminary discussions with new Auburn president Dr. Chris Roberts to discuss the future of the athletics department this summer. Roberts was tabbed as Auburn’s successor to Jay Gogue back in February — at the same Board of Trustees meeting that Gogue openly commented on the university’s inquiry into head football coach Bryan Harsin — and he took over the office in May.

Greene and Roberts had multiple meetings this summer to discuss Greene’s future with the program. Greene indicated at the time he wished to remain at Auburn and that it would be mutually beneficial for the two sides to continue their relationship beyond January 2023.

An extension never came, and as the athletic year got underway this week, Greene informed Roberts that he intended to pursue other professional interests.

“Allen arrived on The Plains with vision, passion and experience to elevate Auburn Athletics to the next level,” Roberts said. “In the brief time that I have worked alongside Allen as President, he has proven to be an asset to Auburn, enhancing our athletics programs and facilities, and has been dedicated to our student-athletes, to integrity and to our University. We’re grateful for his commitment and contributions to Auburn over the past four and a half years and we wish Allen, Christy and their children all the best as they embark on a new chapter in their lives.”

Greene’s tenure at Auburn comes to an end a little more than 4 1/2 years after he came to the Plains from Buffalo, where he previously served as athletics director. During his time with Auburn, the Tigers’ athletics teams won eight conference titles, the men’s basketball team made its first-ever Final Four appearance and climbed to No. 1 in the AP poll for the first time in program history. Auburn also extended Bruce Pearl earlier this year under Greene’s watch, signing him to an eight-year extension. During Greene’s tenure, the baseball team also made two College World Series appearances, including a trip to Omaha, Neb., in June. Greene also helped secure funding and approval for the new football performance center, which is set to be completed later this year, with the team moving in after the upcoming season.

Greene also spearheaded the hiring of Harsin in December 2020, seizing control of the search for Gus Malzahn’s replacement in a power move that ultimately resulted in Auburn plucking Harsin away from Boise State. AL.com reported at the time that Greene’s decision to hire Harsin didn’t sit well with some boosters, who made clear to him that if he went against their wishes and his hire was not successful, they’d make sure to run him out of town.

Harsin went 6-7 in his first year as head coach, losing five straight games to end the season before surviving February’s university-led inquiry into his handling of the football program.