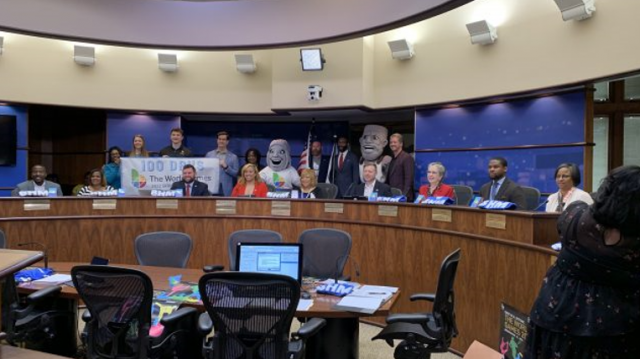 Birmingham City Councilors on Tuesday were mixed on whether the city should come up with another $5 million to help fill a $14 million deficit left by The World Games 2022 (TWG2022).

Nick Sellers, CEO of TWG2022, said Monday plans are underway to close the shortfall “as quickly as possible… and satisfy all of our debts. We have every intention to raise the associated funds and pay our vendors.”

The City of Birmingham is being asked for as much as $5 million next week – on top of the $5.7 million already spent — and Jefferson County approximately $3 million at a later date.

A majority of City Councilors appeared ready to put up an additional money.

Council President Wardine Alexander said TWG was a success for the city and region and steps are being made to ensure that vendors are paid.

“We were able to showcase our city to over 100 countries around the world and welcome thousands of people to Birmingham,” she said. “The council is continuing to work with the mayor to review and address the request that is before us; particularly as it relates to the needs of our local vendors.”

The council also said the city “will continue to see a return on our investment for decades to come as we work to position Birmingham as a destination for large-scale events and entertainment, while taking into consideration the lessons we’ve learned from hosting the World Games.”

She added, “We hope that all our partners that helped to make the World Games possible will join with us to ensure that all of the responsibilities are met.”

Council President Pro Tem Crystal Smitherman said the investment into the World Games was worth it, which means helping to retire the debt.

“I heard a lot of the leaders from other countries saying how pleasant it was to be in Birmingham, the Southern Hospitality, how friendly everybody was, how beautiful it was,” Smitherman said. “I think I felt a new air in Birmingham. A lot of hope, positivity, happiness, people actually enjoying themselves.”

However, O’Quinn said it’s important for the city to make vendors whole. To do otherwise would “taint the future conversation about the legacy of TWG 2022,” O’Quinn said.

“We’re talking dozens of businesses, many of whom [were] either scaled-up existing businesses or were new startups…So if these several dozen businesses were to have to absorb the financial losses, that would definitely put The World Games in a different light,” said O’Quinn, adding that TWG 2022 will continue to pay dividends “for years to come.”

“I think Birmingham will have more and more opportunities to host these types of large-scale events in the future and want to make sure that we vote [on the additional spending] in a way that maximizes our benefits,” said Woods, who was still reviewing information before deciding how he would vote.

Councilor J.T. Moore said he was conflicted between extra funding for TWG and small businesses, “the backbone” of Birmingham and what residents will say.

“We definitely want to make sure that we take care of [small business owners in the city]. However, the challenge is, as a City Councilor giving five or six million more dollars towards this event could be seen from residents as a slap in the face because it’s almost like, ‘Well, if you can find the money to be able to do this, why can’t you also find it to pave our streets or fix our sidewalks…’” Moore said.

“Nobody could have fathomed that the World Games would ever even be in Birmingham, let alone pulled off, like we made happen. I think that a lot of people now look at Birmingham as a destination space, whereas they may not have before. They might have just thought we had dirt roads and tin roofs, which is far from the truth,” Moore said.

Councilor Hunter Williams declined to comment except to emphasize that that the city of Birmingham was not the sole provider of funding for The World Games and noted that Jefferson County and the state of Alabama are other public entities that provided significant backing for the events.

“All the comments [from residents] I’ve seen, for whatever reason, are under the presumption that the city of Birmingham put up all of that money, which is not, obviously, accurate,” Williams said.

Councilor Carol Clarke declined to comment for the story.

Councilors Valerie Abbott and LaTonya Tate could not be reached for comment.

Sellers, the TWG 2022 CEO, said organizers are working with public partners, such as the city and county, and private partners, which include the corporate community.