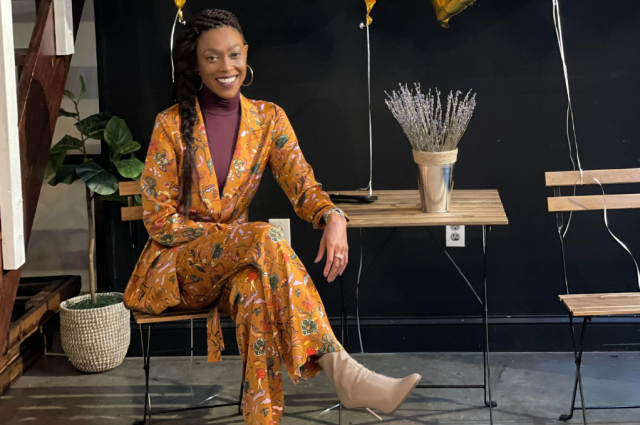 Shifting from being a publicist to a costume designer can require tons of changes, but one thing remains the same Jazmine Motley-Maddox – the art of telling a story.

Whether it be news related: “I’ve always loved news,” said the 36-year-old from Birmingham, Ala. “The news was always on in my house; we always had the newspaper every Sunday…we always kept in touch with culture and stuff like that growing up in the house.”

Or fashion related: “What we wear tells our story,” Motley-Maddox said. “And it’s okay to shape and shift that story however you want…whatever you put on is saying something about who you are.”

Motley-Maddox, who considers herself a walking duality of the two, is a former publicist who decided to become an image and costume designer who specializes in TV and film. She also has a podcast titled Costumes & Coffee that highlights artists who create the latest in fashion, costume design and culture and has worked on projects such as BMF (a show on Starz), Honk For Jesus (a movie that came out this year), Rhythm & Flow from Netflix, and Young Dylan (a Nickelodeon show).

She refers to herself as an image and style strategist who helps people with the imaging and media relations – building contact lists and securing press.

Motley-Maddox grew up in Birmingham, Ala., attended Auburn University and now resides in Atlanta.

Her most recent project, BMF (a television show about a family creating a drug and money empire) is a six-month project.

For Black Mafia Family (BMF) she is the costume buyer, meaning that she works with the designer and the assistant designer as a team. “We were in ’88 [or] ’89…for season two, so I’m at vintage stores, I’m shopping online…my responsibility is to make sure that things are…purchased so that the cast has costumes.”

Her favorite project so far has been Honk For Jesus, a 2022 film starring Regina King and Sterling K. Brown where she served as costume supervisor.

“When we were making that movie we had no idea that it would be this big,” she said.

“But we put so much love into it, and we were able to shop at the church-lady store in Riverdale [Georgia] and to build relationships there, or the hat store in Greenbriar Mall [located in Southwest Atlanta] – to mix high end with low end. She [Regina King] might have had on a $300 church hat but her clothes are from Zara, [a Spanish multi-national retail clothing chain]” Motely-Maddox said.

“We put so much love…time, and attention into shooting that movie during the summer and had no idea that it was going to be what it is…it ended up being way more than what I expected, and I was really proud.” 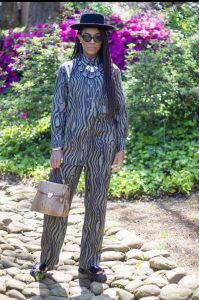 After graduating from Hoover High School located in Hoover, Ala. in 2004, Motley-Maddox attended Auburn University located in Auburn, Ala. with the idea of becoming an elementary school teacher.

But that quickly changed when she stepped foot in one of her first classes as a freshman, Math for Elementary School Teachers,” recalled Motley-Maddox.

“I literally packed up my backpack and left the class before it even ended. I knew that I didn’t want to do that. I knew that was too much of a responsibility for me.

On her way to meet her academic counselor Motley-Maddox ran into the then president of the Black Student Union (BSU) who told her ‘you really like to write, you should consider PR (public relations).’

“So I went back to my room, researched it, went to my counselor, told him about it, and changed my major to that,” said, Motley-Maddox, adding that the news was always something she wanted to dig into.

And that’s what she did. When she graduated, she worked at CNN as a Public Relations Coordinator from 2008 until 2010 after interning for them for two months. She said what she enjoyed most about her work was being the person responsible for disseminating necessary information.

In 2014 Motley-Maddox decided to take a sabbatical. When she came back looking for PR work at the intersection of 2015 and 2016, things didn’t take off so quickly.

“I kept getting turned down for jobs which was unusual for me because…I felt like I had worked with the best of them and even though I took a year off, I…felt like I still had the skills that were necessary to do the job,” Motley-Maddox said.

But after struggling to find a job in PR, she took that as a redirection. “…when you hit your head on the wall a few times…are you going to keep trying to go through the wall or are you going to use the door?”

She decided to use the door. A friend called and told her about a PR position at a large department store and the other a supervisor position where costume designers and wardrobe stylists rent or buy their wardrobe through the store.

“I didn’t even apply for the PR position,” she said. “I applied for [the Studio Services] one, interviewed for it, and got it on the spot.”

The Nerd in Her

In her new position based in Atlanta, Ga. she noticed designers and stylists coming in hungry and tired from their constantly-on-the-go lives so she took the initiative to put a couch, a coffee pot and snacks in the office for them to relax.

“I just started listening to them, and it made me curious,” Motley-Maddox said. “It made me curious enough to ask one of the stylists (Provi Fulp) if I could assist her on a job, and she said ‘yes.’”

She ended up assisting Fulp on K. Michelle’s album More Issues Than Vogue released in 2016) which consisted of a four-day photoshoot and a music video shoot in Atlanta, Ga., “and I kind of fell in love with it.”

“It was really God placing me in the right place at the right time,” she said.

After assisting Fulp, Motley-Maddox continued to reach out to other costume designers “And so, it…just kind of took off,” through word of mouth and building relationships with those she worked with.

In 2018 the idea of starting her business, Motley-Maddox Media, came about when she decided to start her podcast Costumes and Coffee. Through her podcast she has conversations with artists in fashion, costume design, and culture.

She began her business by interviewing the costume designer of A Different World because no one else was looking at that angle during the 30th anniversary of the show.

Motley-Maddox soon became more comfortable styling on her own, she added styling and costuming as a part of her business. Her first client as a stylist was Brian Jordan Jr. (an actor) and after that her client base grew.

Since going out on her own, Motley-Maddox said she has been doing more costuming than styling with commercial and ecommerce jobs, “but to branch out and do more editorial is a dream” of hers.

“The way jobs are set up right now I find myself more often in the costume department either buying, assistant designing, supervising, or designing…sometimes it happens simultaneously. That’s the thing about this business…it’s freelance, so it really is you kind of keeping the momentum and keeping…the ball rolling,” she said.

Looking ahead, Motley-Maddox said there’s one thing she wants to do in the name of giving back.

When costuming projects are done, the clothes are stored in a costume shop where they just sit – they could end up in a museum later, or possibly rented out but most of the clothes just sit. She wants to eventually get those clothes so that she can start a pop-up shop for kids in underserved communities.

“People always say it does not matter what you have on, that’s a lie and that’s the biggest lie to kids who go to school,” expressed Motley-Maddox. “Kids are the biggest critics…And so I think it’s important, one, to do pop up shops…because it empowers them to pick their own clothes and to take advantage of being able to shoot their own style [and] tell their own story…but then it also gives us, Hollywood, a way to give back.”