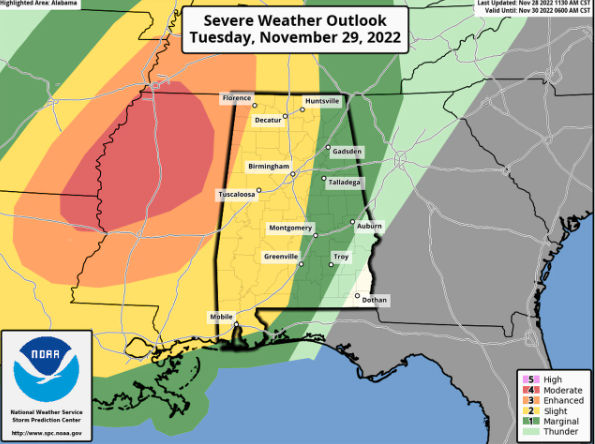 Get ready for another round of potentially severe storms in Alabama.

The National Weather Service said severe weather will be possible starting on Tuesday evening in west Alabama, and the threat will shift eastward overnight and into Wednesday morning.

The strongest storms could generate a tornado or two and bring damaging winds up to 60 mph and hail.

NOAA’s Storm Prediction Center has added — and now expanded — a Level 3 out of 5 (or enhanced) risk for a sliver of northwest Alabama for Tuesday.

A Level 3 risk means that numerous severe storms will be possible.

The SPC also has a Level 2 out of 5 risk in place for other parts of north and west Alabama. A Level 2 risk means scattered severe storms will be possible. The SPC in its latest update just before noon on Monday expanded the Level 2 risk area to cover a large part of the state, from north Alabama to south Alabama.

Areas to the east and south of that have a Level 1 risk, which means that isolated severe storms will be possible.

The threat for storms will extend into Wednesday for those in south and east Alabama, and the SPC has a Level 1 severe weather risk in place for those areas.

The weather service in Birmingham had a briefing on Monday and said a few storms could pop up earlier in the afternoon on Tuesday, and those could have the potential to drop some hail.

The threat for tornadoes is expected to begin to increase later Tuesday night, especially for areas west of the Interstate 65 corridor.

The weather service thinks the storms could lose some of their punch as they move eastward across Alabama, but severe weather will still be possible and all Alabamians need to keep their guard up on Tuesday and during the overnight hours.

In addition to the potential for tornadoes and damaging winds there could be some heavy rain. The weather service said that up to 2.5 inches of rain will be possible in some areas through Wednesday morning.

NOAA’s Weather Prediction Center has a Level 2 out of 4 risk for flash flooding in place across a large part of the state from Tuesday into Wednesday.

Where: All of Central Alabama.
When: Current timeframe is 5 p.m. Tuesday to 6 a.m. Wednesday.
Threats: tornadoes; damaging winds in excess of 60 mph; quarter size hail.