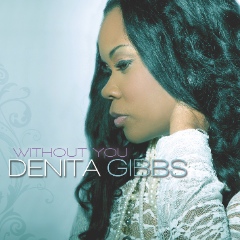 The industry is abuzz about new artist Denita Gibbs’ debut release, Without You, on the Audiostate 55 Entertainment record label (www.audiostate55.com). With this release Audiostate 55 Entertainment, which is distributed worldwide by Warner Music Group, becomes the first and only label from Birmingham to have major distribution from one of the remaining big three, i.e., Warner, Sony and Universal.
Without You is being touted as one of the best urban contemporary inspirational albums to come out in years. Excitement for this project has led to it being placed in more than 500 stores across America, including Walmart, Best Buy, FYE, Family Christian, and LifeWay Christian, among others. There is significant online presence as well, including the stores just mentioned plus iTunes, Amazon, Barnes & Noble, and Christianbook.com. Most are engaged in significant pre-order, limited-time discounts for Without You, prior to the August 13 street date.
“Without You amply portrays the best of what has been lacking far too long by many of today’s “artists” while providing the fresh and current style to which contemporary listeners of music have become accustomed,” says Dr. Henry Panion, III, President and Founder of Audiostate 55 Entertainment, distinguished University Professor of Music at the University of Alabama at Birmingham, and noted conductor and arranger for pop-music icon Stevie Wonder. Panion goes on to say, “Many may wonder why anyone would establish a record company in this world of do-it-yourself recording and illegal downloads, etc. Well, the art of making a great record may be lost to the masses, but it’s one of the reasons I became a musician. I was simply mesmerized by the great records and the level of musicianship displayed by some of my favorite artists, such as Earth, Wind, and Fire and Stevie Wonder.”
Achieving a perfect match for the songs, arrangements, musicians, styles, and song sequence took more than a year to produce.  The addition of the vibrant and youthful performance by the string orchestra from the Alabama School of Fine Arts on the title track was approached with great care and consideration. In describing the title track, a song she wrote, Gibbs states, “even when I sing it myself, I get emotional thinking about how much I love The Lord and how I can’t live without Him.
Panion expressed how great talents often have their artistic dreams and aspirations crushed by the harsh realities of life, even those with music degrees. Denita Gibbs is one of those talents who, with just a little help, has been able to transform her own life stories into the most artful, revealing, and relevant project of hope and encouragement.
A happily married newlywed, Gibbs expresses that before now the only other time she and her 12 year-old daughter had lived in a physically and emotionally safe place was when they lived with her parents. In many ways this project is one big declaration to the Lord that none of this would have been possible “Without You.”