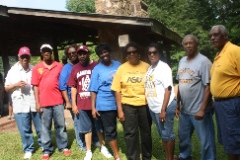 The Tennessee State University (TSU) National Alumni Association – Birmingham Chapter has for the second year in a row reached out to invite other HBCU Alumni Chapters to join them in their annual picnic.  This was an idea that the chapter had to spark the waning interest in the local HBCU Alliance group. Last year only one other University accepted the invitation. This year, however, Saturday, August 24, at Tom Bradford Park in Birmingham, five other HBCU Alumni Chapters committed to be a part – Alcorn State University, Alabama State University – Jefferson/Shelby County Chapter, Miles College, Stillman College, and Tuskegee University.  In grand ole “HBCU Style”, a joyous fellowship took place with all dining on delicious food, dancing to great music, and snapping fun photos along the way.  Several younger alums felt blessed to fellowship with HBCU alums that were their former teachers like Ms. Druella Borders and Ms. Veronica Salary (Miles Alums) and Ms. Barbara Bonner, Ms. Lottie Palmer, and Ms. Odessa Ashley (ASU Alums).  The group even gave a round of applause to Mr. & Mrs. Benson, as Mrs. Barbara Benson gave a rousing testimony of how recently they were sleeping and heard the loud noise of the UPS plane that crashed near the airport, shaving trees on both sides, but missing their home.  GOD IS GOOD, exclaimed Mrs. Benson. Other fun festivities were a cheer-off and old school dance competition among the HBCUs. By the end of the picnic we also had representatives from several other HBCUs including Alabama A&M, Knoxville College, Spelman College, and Alabama State University-Birmingham Chapter. We concluded by establishing a planning committee with one representative from each HBCU to make sure that the event continues.