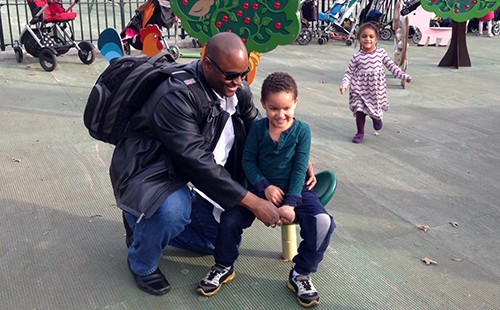 — Defying sterotypes, then shot down by a biased judge. — 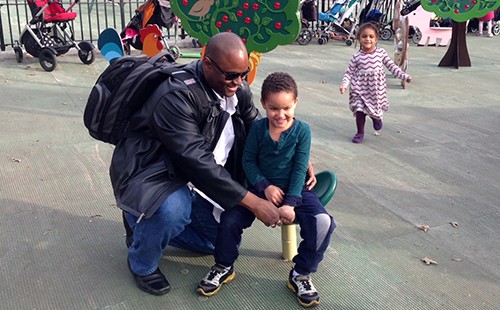 Christopher G. Roberts, a blind father, and his children playing in the park.

New York, NY (BlackNews.com) — The right of the natural parent to the care and custody of his or her child is considered a fundamental right in the United States. In spite of that, a New York Kings County Supreme Judge in Brooklyn has slammed the door on an American fathers right to parent is own children solely it seems because he is blind. The judge, in this case, would insert able and in particular sighted in front of natural parent. No vision, no children sums up the Courts decision, upturning decades of civil rights progress and common sense.

Though we have become accustomed to and even desensitized to – custody disputes as 50% of US marriages end in divorce; in this case there was no mud-slinging in May. In fact, Mr. Roberts’ wife never even had to testify nor say a word that day. Nor were there any records by any agency be it social services or the police, nor from the childrens pediatricians or teachers, suggesting that Mr. Roberts children had ever been endangered because their father was blind. Interestingly enough, Mr. Roberts was a highly sought-after teacher in the arts where he has taught over 2,000 children from preschool through 12th grade in the NYC area. Instead of needing judicial rescue, Mr. Roberts children were both well cared-for, gifted, living in Park Slope attending private pre-school a lifestyle provided for by their blind father. Nonetheless, the judge ordered “family intervention” sending social services to the home they found nothing and ordered all of the childrens time with their father be “supervised” by a sighted nanny. Had Mr. Roberts been unable to pay for a sighted nanny he would have been unable to see his children the children he had been raising at all.

Somehow the fact that tens of thousands of blind parents raise their children every day without sighted supervision was lost to the judge. It is hard to tell how Mr. Roberts’ race (black) and gender (as the father, not the mother) played into his biased decision. Perhaps stereotypes about all of these traits continues to play a hand in this case.

The worldview undergirding the view that blind people are not capable of parenting takes us back to a dark time of US history where eugenics and moral laziness, prescribed involuntary sterilization for those persons deemed lesser than not fully someone.

Almost a year has passed since Mr. Roberts’ parental rights were stripped – he remains resolved to fully restoring his parental rights. Though he was once a primary caretaker of his children, he now sees them for only 17 hours each week even then his time is supervised by a sighted nanny who he has been ordered to employ. Mr. Roberts also remains physically blind, but many argue that it is the judge who cannot see.

About Christopher G. Roberts:
Christopher G. Roberts has over 23 years of experience in professional theatre. He is the Founder and Producing Artistic Director of Steppingstone Theatre Company (SSTC), a not-for-profit arts organization. He has an MFA degree in acting from Brooklyn College and a BA degree in theater from the University at Buffalo. As an actor, he has appeared on television in shows such as OZ, Sex in the City, “What Would You Do,” in national network commercials, as well as on several daytime dramas. In addition, his regional and international credits include Steppenwolf Theatre in Chicago, McCarter Theater in Princeton, New Jersey, Exile Theater in Northern Ireland and The Manhattan Theater Club.

Christopher is also a playwright; his first full-length play, Reflections of a Heart: The Isaac Woodard Story, was produced off-Broadway at The Clurmen Theatre in June 2010. During his tenure as a director and teacher for various arts institutions and public schools, he has taught over 2,000 children from grades pre-K through 12. Christopher was the Head Accessibility Consultant for Broadway productions such as: Finean’s Rainbow (’09), The Miracle Worker (10), and Catch Me If You Can (’11).

He is also a proud and active member of The Performers with Disabilities Guild and the National Federation of the Blind. Christopher is also featured with one of his two longtime mentors, Stephen McKinley Henderson, as well as with other various well known artists in the groundbreaking book, Acting Teachers of America: A Vital Tradition. Christopher was the Assistant Director for Julliards acclaimed production of August Wilsons Joe Turners Come and Gone, directed by his other mentor, the late Israel Hicks. Christopher’s current and most important role to date is that of a loving and devoted father to his children.

2) Parenting Without Sight: What Attorneys and Social Workers Should Know about Blindness:
www.nfb.org/images/nfb/publications/brochures/blindparents/parentingwithoutsight.html

3) Rocking the Cradle: Ensuring the Rights of Parents with Disabilities and Their Children:
www.ncd.gov/publications/2012/Sep272012/