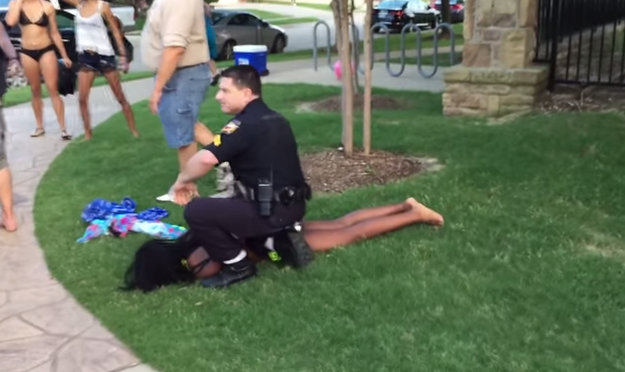 The bikini-clad teenage girl who was forcibly restrained by a police officer responding to a disturbance at a pool party in a Dallas suburb over the weekend says she was an invited guest and was obeying his orders to leave when he grabbed her.

“He told me to keep walking,” Dajerria Becton, 15, told Fox 4. “And I kept walking and then I’m guessing he thought we were saying rude stuff to him.”

Becton was then thrown to the ground by Eric Casebolt, one of 12 McKinney Police Department officers who responded to the disturbance call at a private community pool Friday night.

“He grabbed me, twisted my arm on my back and shoved me in the grass and started pulling the back of my braids,” Becton said. “I was telling him to get off me because my back was hurting bad.”

In a video of the incident taken by a fellow teen and posted to YouTube, Casebolt, who is white, can be seen shouting obscenities and ordering some black teens to lie on the ground while telling others to disperse. He then pulls his gun on a pair of black teenagers who appear to be coming to Becton’s aid.

Becton was not charged and was later released to her parents.

After the footage surfaced, Casebolt was placed on administrative leave.

“This video has raised concerns that are being investigated,” the McKinney Police Department said in a statement Sunday.

Conley added: “As the chief of police, I am committed to a complete and thorough investigation into this incident.”

“I am disturbed and concerned by the incident and actions depicted in the video,” McKinney Mayor Brian Loughmiller said in a separate statement. “Our expectation as a City Council is that our police department and other departments will act professionally and with appropriate restraint relative to the situation they are faced with.”

The video quickly sparked outrage on social media, as many drew comparisons to recent high-profile cases of police bias in Ferguson, Mo., and Baltimore. The National Bar Association, a network of predominantly African-American attorneys, judges and law professors, called for Casebolt’s immediate firing.

“It is insufficient to place him on paid administrative leave, when it is obviously clear that this officer was not enforcing the law, but instead was enforcing his will and power and showing explicit bias towards these African-American teenagers,” the Washington, D.C.-based group said. “The girl is obviously in distress and not in any manner moving or attempting to get away from the officer. She posed no physical threat to the officer.”

Some witnesses in the neighborhood disagreed.

“He grabbed her arm and tried to handcuff her, and she was resisting immediately and she should’ve just stopped at that point,” one white woman, who declined to be identified on camera, told the Fox affiliate. “They were just doing the right thing when these kids were fleeing and using profanity and threatening security guards.”

Becton, though, said she wouldn’t be satisfied with Casebolt’s termination.

“Him getting fired is not enough,” she said.