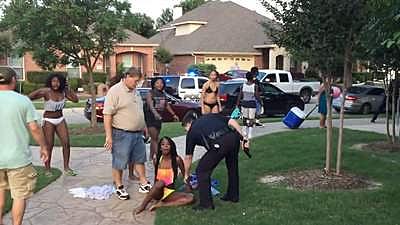 Texas cop pulls gun: A Texas police officer who was filmed pinning a teenage girl to the ground has been put on leave, but opinions vary as to whether or not excessive force was involved in police response to a Texas pool party.

After a video of a Texas police officer pinning a teenage girl to the ground at a pool party on Friday went viral, the officer has been placed on administrative leave. But the debate is heating up over whether this was a case of excessive force used on non-white teens or one of an officer responding appropriately to a potentially dangerous situation.

The video shows several officers arriving at a pool party in McKinney, Tex., and telling the teenagers to get down on the ground. Several teens are handcuffed and an officer yells at others to leave while also shouting profanities. Eventually, the officer pulls out his gun and pushes a black girl in a bikini to the ground by her head and holds her with his knees on her back.

The McKinney Police Department said in a statement on Facebook that a call came in regarding a disturbance at the Craig Ranch North Community Pool involving multiple juveniles who did not live in the community and refused to leave. “First responding officers encountered a large crowd that refused to comply with police commands,” the statement said.

The disturbance in question, part of which was also filmed, seemed to involve a verbal dispute that turned physical between adult members of the community and partygoers, involving racist comments made against the black teens at the party, according to BuzzFeed News.

Brandon Brooks, who shot and uploaded the video of the officer, later identified by multiple reports as Cpl. Eric Casebolt, told BuzzFeed News, “I think a bunch of white parents were angry that a bunch of black kids who don’t live in the neighborhood were in the pool.” Brooks said that many of the children at the party were at the pool on guest passes or had entered by jumping the fence.

When the police arrived, Brooks, who is white, said, “Everyone who was getting put on the ground was black, Mexican, Arabic,” he said. “[The cop] didn’t even look at me. It was kind of like I was invisible.”

Many have come to the officer’s defense on social media, claiming his response was justified given that the children refused to leave when they were told.

Benét Embry, a black resident of the community who witnessed the incident, told the Dallas News he did not believe the conflict was racially motivated.

“This is not a racist neighborhood,” he said. “There are a lot of good people in this community. It’s unfortunate that an event like this brings the spotlight.”

Embry also said the girl the officer pinned down had been talking back, exacerbating the situation.

“She’s bringing more stress into an already volatile situation,” he said. “Out of a hundred kids, you probably had seven who are acting the fool. They totally spoiled it for everybody else.”

In a press conference on Sunday, Chief of Police Greg Conley said the McKinney Police Department was “committed to treating all persons fairly under the law” and would be launching an investigation into the officer’s behavior.

When asked if behaviors involving profanity and physical aggression were taught in officers’ training, Conley said, “It’s something we’re going to have to look into, to determine what we’re training as far as the officers and their reaction on the scene. Anytime you confront a large group of people, it’s a very dynamic situation and tensions can rise very quickly.”