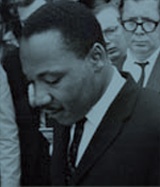 July 31, 2015 The Birmingham Civil Rights Institute (BCRI) will commemorate the 50th anniversary of the Voting Rights Act with its final program, The Voting Rights Act @ 50: Shelby vs Holder: Challenges to Voting Rights Today on Thursday, August 6, 2015 at 6 pm in BCRI’s Woods Community Meeting Room.  The act was signed into law on August 6, 1965.
“The future of voting rights is Shelby vs. Holder, but it is amazing how our local community is not fully aware of its repercussions,” explained Kendall Chew, BCRI Education Assistant.  “The backbone of this case was formed in Alabama, but it affects the nation,”

Shelby vs Holder will feature Joyce Vance White, United States Attorney for the Northern District of Alabama, Reverend Kenneth Dukes, Pastor of the Holly Grove Baptist Church and Intervener Defendant in Shelby County’s Constitutional Challenge of the Voting Rights Act and Attorney Ed Still of  Edward Still Law Firm.   Barry McNealy, Social Studies Instructor at A.H. Parker High School and BCRI Legacy Youth Leadership Program Facilitator, will moderate the panel.  The speakers will address the history of the Voting Rights act of 1965 as well as the impact of the 2013 Shelby vs Holder decision on today’s voting procedures.

Attorney White added, “Voter education is key to ensuring voters are well-informed and can effectively exercise their voting rights.  It’s vital that people understand how voting affects not just our country’s leadership, but also their personal lives.”

This event is free and open to the public, with voter registration available. Refreshments will be provided by Church Street Coffee & Books.  Registration is required at www.bcri.org.
Page 1 of 2
####
Shelby County v. Holder, is a landmark United States Supreme Court case regarding the constitutionality of two provisions of the Voting Rights Act of 1965.  In 2013, petitioner Shelby County, in the covered jurisdiction of Alabama, sued the Attorney General in Federal District Court in Washington, D. C., seeking a declaratory judgment that sections 4(b) and 5 are facially unconstitutional, as well as a permanent injunction against their enforcement.  On June 25, 2013, the Court ruled by a 5-to-4 vote that Section 4(b)of the Act is unconstitutional because the coverage formula is based on data over 40 years old, making it no longer responsive to current needs and therefore an impermissible burden on the constitutional principles of federalism and equal sovereignty of the states. The Court did not strike down Section 5, but without Section 4(b), no jurisdiction will be subject to Section 5 preclearance unless Congress enacts a new coverage formula.

The Voting Rights Act, signed into law by President Lyndon Johnson on August 6, 1965, aimed to overcome legal barriers at the state and local levels that prevented African Americans from exercising their right to vote
under the 15th Amendment (1870) to the Constitution of the United States. The act significantly widened the franchise and is considered one of the most far-reaching pieces of civil rights legislation in U.S. history.

About BCRI
The mission of BCRI is to enlighten each generation about civil and human rights by exploring our common past and working together in the present to build a better future.   BCRI opened in 1992 and presents an in-depth look at the Civil Rights Movement, especially in Birmingham, from before the movement’s inception through today’s international struggle for universal human rights.  BCRI is a place of research, a teaching facility and an acknowledged learning center for people of all ages and backgrounds.  Each year, BCRI reaches more than 150,000 individuals through tours and exhibitions as well as school and community outreach, public programs, special events, and archival collections.   Call 205-328-9696 or www.bcri.org for more information.