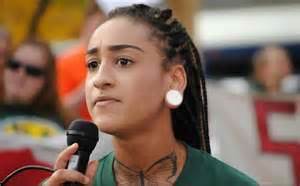 SACRAMENTO, Calif. — When Sacramento police arrested black activist Maile Hampton  (pictured) over her role in a Black Lives Matter protest in January, they didn’t charge her with obstructing traffic, trespassing or disturbing the peace.
They charged her with felony lynching.
No one was killed or even hurt in the demonstration. But the 20-year-old woman was booked under a 1933 section of the California penal code that applies the word “lynching” to the crime of attempting to seize someone from police custody.
While the offense was later downgraded to something more conventional, the use of the lynching charge incensed many community leaders and led California lawmakers to unanimously vote to strike the term from the books. The measure won final approval last week and is now before Gov. Jerry Brown.
“To come full circle 2015 and have a woman of color charged with that crime — the irony was not lost on me,” said state Sen. Holly Mitchell of Los Angeles, the Black legislator who introduced the bill. She said that although the code was originally designed to protect African Americans in police custody, the word “lynching” should no longer be attached to the law.
Among others distressed by the charge against Hampton was Mayor Kevin Johnson, a Black man who likened the terminology to another painful vestige of the nation’s racist past: the Confederate flag, which is coming down fast around the U.S. in the aftermath of the church massacre in Charleston, South Carolina.
“When I first heard that word, I immediately start thinking about someone hanging from a tree with a rope around his neck,” Johnson said. “Is that really what this law is supposed to mean? That’s just a really painful context.”
The details of Hampton’s run-in with police are murky. But cellphone video that surfaced after the demonstration shows a police officer seizing a protester in the street. A woman is seen trying to yank the protester away when another woman, who appears to be Hampton carrying a bullhorn, grabs the man’s arm and tries to pull him from the officer’s grasp. Others soon join the effort.
The use of the word “lynching” for group interference with police only loosely matches the historical conception of lynching — the hanging of Blacks by racist mobs. Jim Crow-era mobs in the South lynched almost 4,000 Blacks between 1877 and 1950, according to some estimates. Many victims were dragged from jail or otherwise wrenched from police custody.
Mitchell and Johnson were not the only public officials to note the loaded nature of the term.
Deputy District Attorney Steve Grippi cited its “incendiary” connotation in explaining his decision to downgrade the charges originally brought against Hampton by police to misdemeanor interference with an officer.
“This violation is equally applicable to the conduct alleged in this action but does not carry with it the racially charged and inflammatory terminology,” Grippi wrote in April.
Police and the district attorney’s office would not comment on the case, and Hampton declined to be interviewed because the charges are still pending.
Another Black Lives Matter protester, 23-year-old Luz Flores, was arrested on felony lynching charges just last week, Los Angeles police confirm.