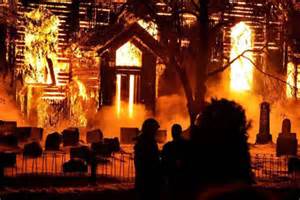 BALTIMORE, MD – In the weeks following a church massacre in which nine people were shot dead by a white nationalist at Emanuel AME Church in Charleston, South Carolina, several predominantly black churches in Southern states have been burned. Federal authorities told The Associated Press that the blaze that destroyed the most recent church, Mount Zion African Methodist Episcopal Church in Greeleyville, South Carolina, does not appear to be intentionally set by an arsonist. Three of the incidents are being investigated as arsons. Subsequently, the NAACP has released the following statement.
From Cornell William Brooks, NAACP President & CEO:
“The spike in church burnings in Southern states over the past few days requires our collective attention. When nine students of scripture lose their lives in a house worship, we cannot to turn a blind eye to any incident.  As we wait for authorities to conduct their investigations, the NAACP and our state conferences across the country will remain vigilant and work with local churches and local law enforcement to ensure that all are taking the necessary precautions to ensure the safety of every parishioner. For centuries, African American churches have served as the epicenter of survival for many in the African-American community, as a consequence, these houses of faith have historically been the targets of violence. We will use every tool in our advocacy arsenal to preserve these beloved institutions.”
###
Founded in 1909, the NAACP is the nation’s oldest and largest nonpartisan civil rights organization. Its members throughout the United States and the world are the premier advocates for civil rights in their communities. You can read more about the NAACP’s work and our five “Game Changer” issue areas here.