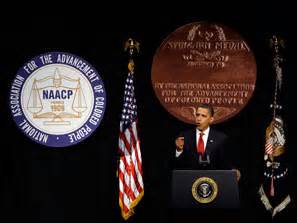 “We are honored to welcome President Obama back to our NAACP national convention,” stated NAACP Chairman Roslyn M. Brock. “Our members are looking forward to President Obama delivering a powerful message that reinforces our commitment to being champions for civil and human rights in the 21st century.”

This is the second time Mr. Obama will address the NAACP’s National Convention as President of the United States. The NAACP values the opportunity to hear from elected officials, government leaders and candidates for public office.

“President Barack Obama, having spoken eloquently of grace to a grieving nation in a moment of crisis in Charleston, will now address the social and economic challenges of our time in the hometown of American freedom – Philadelphia, stated NAACP President and CEO Cornell William Brooks.  Thousands of NAACP leaders, delegates, activists, youths, and supporters will welcome him to the 106th Convention of the NAACP in a moment in which his voice and our voices so desperately need to be heard. President Obama has been on the forefront of transformative change from civil rights to human rights over his term and in recent days.  We in the nation eagerly anticipate his vision and plans for the difficult work ahead.”

This year’s convention will run from July 11 – July 15 under the theme “Pursuing Liberty in the Face of Injustice.”  The NAACP will focus on building a broad based agenda around voting rights, criminal justice reform, health equity, economic opportunity and education equality ahead of the 2016 presidential election.  Click here to see the schedule of events; click here to register for press credentials.