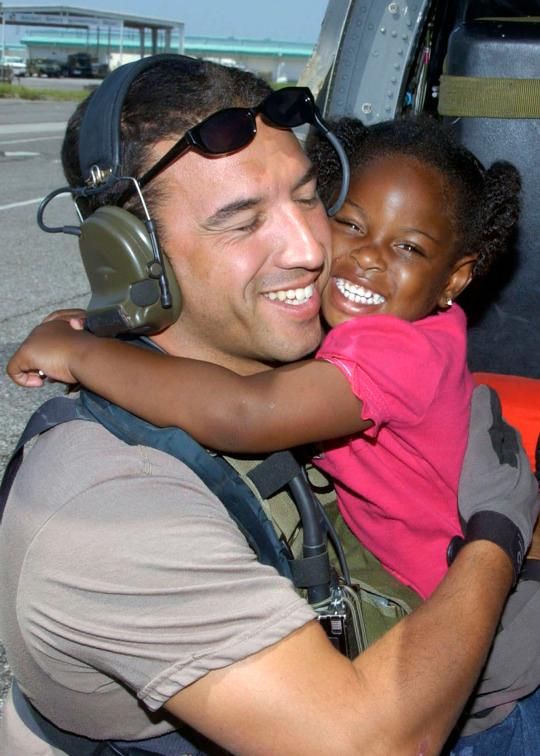 The U.S. Air Force Reservist and father of two whose search for a girl he rescued during Hurricane Katrina went viral this year will finally meet with her this month.

In 2005, then Staff Sgt. Michael Maroney was sent into New Orleans to find and rescue Hurricane Katrina survivors. When one family got into his helicopter, a 3-year-old girl made a big impression. “When I rescued her and her family, they were just so happy to see us,  and she herself was just excited, happy. … Just loving life,” Maroney told Yahoo News earlier this year. “Just her essence, that spirit that she had, just sucked me right in and I was amazed. I picked her up and she wrapped me up in a hug and everything melted away. I didn’t see anything but pure joy at that moment. It was an awesome hug.”

The moment was captured by Air Force photographer Veronica Pierce, and for a time it could be seen on Burger King placemats, AT&T phone cards, and even a magazine cover, according to the Air Force Times. In the decade since, the image has faded from public prominence, but it was always on the mind of Maroney, who has been trying to find the young girl — posting online, adding a video to YouTube, even writing to Oprah Winfrey for help. But it wasn’t until a 16-year-old who learned of the search launched a #FindKatrinaGirl campaign in February that Maroney’s search went viral, getting coverage on a number of news outlets.

Eventually, the campaign made its way to Waveland, Miss., where the young girl’s family had settled. “The whole neighborhood told us they saw LeShay on the news, and everybody told us someone was looking for her,” Shawntrell Brown, mother of now 13-year-old LeShay Brown, told People. Though Shawntrell could still recall the moment in the helicopter, she was surprised it was so meaningful for Maroney. “I didn’t know he still remembered it, that he was that moved by her,” she said.

STORY: Money Pours in for Stranger Who Answered Mom’s Unusual Plea for Kidney

After ten years of searching, Maroney had finally found Katrina Girl. “A friend of hers contacted my son on his Instagram and said, ‘Hey, the girl your dad’s looking for is a friend of mine,“ Maroney told ABC News. “He sent us a photo of the girl a month after Katrina, showing her and her family in a shelter in Tennessee. I compared that photo with my photo, and I knew that it was her.”

Maroney soon connected with LeShay and her mother over the phone, and though LeShay barely remembers that first meeting, Maroney says the call was exactly what he’s been waiting for. “I talked to her and her mother and it didn’t feel real. I’ve been speechless for the last couple of days. The English language doesn’t have the words for how happy I am,” Maroney tells Yahoo Parenting. “I talked to LeShay about how school is going, and I told her that our picture had been all over the world and that so many people were touched by her smile. Her mother told me what happened to them before I got them, what happened after, and it connected a lot of dots for me.”

The call was emotional for both sides, Maroney says. “Everyone was pretty excited. I think they were touched to know that I’ve been wondering about them every day for ten years,” he says.

Now the two families are planning to meet later this month, and Maroney is looking forward to introducing his sons to the Browns. “I have a son that is LeShay’s age and I think that’s a large part of why she stuck with me all this time,” he says. “I remember when she told me she was 3 and I said, ‘my son’s 3′ and she was so excited.”

Maroney is especially grateful that the story has happy ending. “In my line of work, it doesn’t usually turn out happily,” he told People.  “This hug, this moment, was like — everybody I’ve ever saved, that was the thank you.”