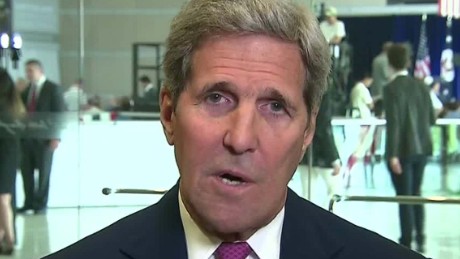 The announcement means that at least 34 senators — the number required by the Constitution to sustain a veto — will back Obama’s expected veto of a Republican resolution to disapprove of the deal. Mikulski is retiring at the end of her term.

While majorities of both the GOP-controlled House and Senate are poised to vote against the agreement, supporters of the multinational accord that aims to curb Iran’s nuclear weapons program are also hoping to get the 41 votes needed to filibuster the bill and prevent it from even getting to a final vote in the Senate.

Secretary of State John Kerry said the administration will continue to try and push support for the deal past the 34 votes they now have “until the last moment.”

“Thirty-four votes are obviously enough votes for the president’s veto to be upheld,” Kerry told CNN’s Christiane Amanpour. “That is not satisfactory for us. We do want to try to go further. We’ll continue to persuade.”

That prospect upsets some Republicans who believe the historic agreement deserves a final up-or-down vote.

Nearly all Republicans have come out against the agreement, arguing it sets up weak standards for international inspectors to monitor whether Iran is complying with the agreement and would allow Iran to build nuclear weapons in a few years.

But only two Democratic senators — Chuck Schumer of New York and Bob Menendez of New Jersey — have announced they oppose it. The Senate’s 54 Republicans would need four more Democrats to join them in opposing the deal to end the filibuster and send the bill disapproving of the deal for a vote.

The agreement, which took years for the so-called P5+1 — the U.S., U.K., France, Germany, China and Russia — to broker, has been the subject of intensive lobbying by both sides. Ultimately, opponents’ multimillion-dollar campaign failed to resonate with enough of the Democratic lawmakers it was targeting.

Votes are expected after lawmakers return from a summer recess next week but before Sept. 17, the statutory deadline for Congress to act on the deal. But GOP leaders have not announced when those votes will take place.

“Forcing a bad deal, over the objections of the American people and a majority in Congress, is no win for President Obama. The White House may have convinced just enough Democrats to back an agreement that legitimizes Iran’s nuclear program, trusts the regime to self-inspect and offers amnesty to terrorists, but this deal is far from being implemented,” Fritz said.

Read more: What is the Iran nuclear deal?

The administration only needs one chamber to sustain its veto in order for the Iran deal to go through. House Democratic leadership aides are confident that they also have enough votes in the House to uphold a veto.

The Iran deal has been a charged topic in the 2016 presidential race and GOP, candidate Sen. Marco Rubio of Florida, a member of the Senate Foreign Relations Committee, was the first in the field to react to the 34th vote.

Vice President Joe Biden, meanwhile, tweeted that “The #IranDeal is the best available option to block Iran from a bomb. It is in our national security interests.”

The administration is clear it will continue to sell the Iran deal to the public as it looks to bolster the number of votes in favor of the deal and sway a divided public.

Following Mikulski’s announced decision, Kerry will deliver a speech in Philadelphia continuing to make the case for the deal.

In his interview with CNN before the speech, Kerry said he would look to “dispel the myths” that he says opponents of the deal have propagated, instead laying out “specifically and factually what this agreement does and doesn’t do.”

He insisted the deal would make the world safer — including Israel and the Gulf states that have expressed concerns — by preventing Iran from obtaining a nuclear weapon, rather than paving a pathway toward a bomb, a charge of the fiercest critics.

Opponents say the billions of dollars in sanctions relief Iran will receive will bolster its terrorism-funding and other military operations that have contributed to an increasingly unstable Middle East.

But Kerry said the amount of money Iran will receive in sanctions relief will be much lower than what some critics have contended. And while Iran will receive a windfall of tens of billions of dollars, Kerry said he and the U.S. intelligence community are confident that windfall will not put money in the hands of terrorists.

“Some may find its way to some bad or nefarious activity, but the activities that we have objected to…are not just fueled by money. Much of the terrorism that has been supported in the region has been done on the cheap, not because of money,” Kerry said.

“I don’t believe that the money released by this…is going to be determinative in any way regarding the security of the region,” he added.