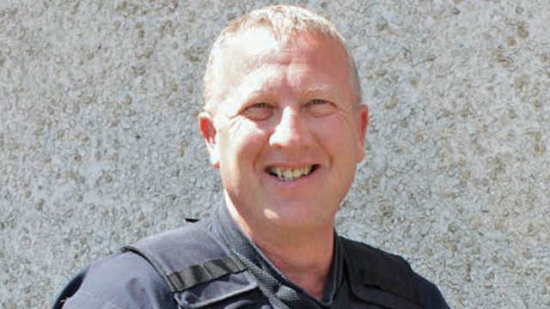 (CNN)Alex Stone knew he had no other choice.

“I had to do this,” he told CNN affiliate KOIN, but he said the aftermath hasn’t been easy.

“I’ve received death threats, a tire flattened with a nail on my driveway,” he said. “My kids, they’re afraid to go outside.”

Stone’s complaint, filed along with a complaint from another officer over the summer, alleges that Clatskanie’s then-police chief, Marvin Hoover, compared African-Americans to monkeys, made monkey sounds and sang “Dixie” while being debriefed on the arrest of a woman who had said she was discriminated against.

“While Chief Hoover was scratching and chanting, he started to move around the room, in a dance or jumping fashion. While jumping and moving about the room, Chief Hoover momentarily beat his chest like Tarzan,” Stone’s complaint said. “As Chief Hoover was comparing African-Americans to monkeys, I began to become extremely uncomfortable. I have never been in a work environment where a manager, especially an executive officer, is openly racist.”

Stone said he tried to continue debriefing Hoover but was interrupted again.

“This time Chief Hoover said, ‘That’s what they deserve,’ ” Stone alleges. Then, according to the police officer, he started singing the words to “Dixie” while pumping his fist as though he were punching someone.

“Officer Stone brushed aside the antic but I could observe that it bothered him,” he wrote. “At the same time I was in disbelief that the Chief of Police was acting in such a manner while an officer is concerned he may be accused of racism.”

Chief retires while on administrative leave

He was placed on paid administrative leave last month after the complaint, KOIN reported. Soon afterward, he retired, prompting a letter from the city’s mayor to the local newspaper, praising his years of service.

“I say, thanks to Chief Hoover for a job well done. You have this community’s gratitude, gratefulness and appreciation,” Mayor Diane Pohl wrote. “Enjoy your retirement knowing we will miss you and wish you all the best. Just take it easy on the elk, bear and fish that you will have more time to pursue!”

She told KOIN the city’s investigation had been completed.

The decision to allow Hoover’s retirement drew sharp criticism from the ACLU of Oregon.

“Allowing Chief Hoover to retire while paying him a bonus sends exactly the wrong message. Rather than holding Chief Hoover accountable for his racism, they rewarded him,” David Rogers, the chapter’s executive director, said in a written statement. “By condoning Chief Hoover’s actions and intolerance, the city council has delivered a disturbing message about the values of Clatskanie, at the same time discouraging people who think about stepping up and doing the right thing by reporting such unacceptable actions.”

City: Deal ‘in the best interests of the city’

Hoover chose to end his employment before the city’s investigation into the alleged racism was completed, city officials said in a statement Tuesday.

“The city strongly condemns the alleged conduct,” the statement says, adding that it reached a separation deal with Hoover that was “in the best interests of the city.”

The city will conduct diversity training for its employees, the statement said.

“The city regrets that this incident occurred and supports that the matter was reported,” the statement said. “The city asks that members of the public respect the rights of the individuals who brought this matter forward.”

A reporter from KOIN asked Stone whether, when he made the complaint, he was worried he could lose his job over it.

The officer didn’t hesitate when he responded.

“I’m still worried about that,” he said.

Would you admit it if you were a racist?