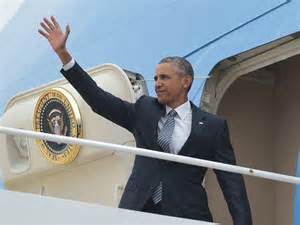 The campaign trails probably never got as rough as this.

President Barack Obama will trek through the Alaskan wilderness with survival expert Bear Grylls for a special edition of NBC’s “Running Wild with Bear Grylls,” it was announced Monday by NBC and producer Electus.

The episode, which will be taped and air later this year, is meant to call attention to the effects of climate change on that area.

Grylls recently shared a tweet from Obama that quoted from one of the Commander in Chief’s weekly addresses that said, “As long as I’m president, America will lead the world to meet the threat of climate change.”

The second season of “Running Wild with Bear Grylls” is currently airing and has paired the survivalist with Kate Winslet, Jesse Tyler Ferguson and other famous names determined to test their physical limits. The season finale, which airs Sept. 7, will feature New Orleans Saints quarterback Drew Brees. Needless to say, Obama will become the first U.S. president to receive a crash course in survival techniques from Grylls.

This is the latest attempt by Obama to use the entertainment world to promote his missions. In July, he became the first sitting U.S. president to visit a federal prison — an event that was part of a Vice documentary scheduled to air in September. Other examples include an appearance on Marc Maron’s “WTF” podcast, where he famously used the “n-word” in a harsh conversation about race in this country, and an interview with naturalist David Attenborough that aired on BBC America. On the lighter side, he’s also sharing his musical tastes via Spotify.

This event was not meat with complete support. Hours after the announcement of the special, PETA released a statement that highlighted past criticism of Grylls’ programs.

“Bear Grylls’ shows are known as the bottom of the barrel in demeaning sexist, speciesist, and who knows what other “-ist” TV reality shows—and that’s certainly saying something,” said PETA president Ingrid Newkirk. “These internationally condemned programs, on which women have been bullied into slitting a baby pig’s throat and eating a mouse soaked in urine, are the last place for the 44th president to be seen. There are far better ways to get the message about global climate change out than by appearing on this disgusting show.”

Along with Grylls, Obama’s “Running Wild” journey will be produced by Delbert Shoopman and Dave Pearce of Bear Grylls Ventures, and Chris Grant, Viki Cacciatore and Liz Schulze of Electus.