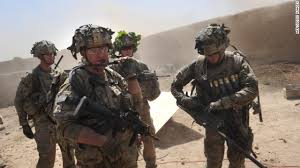 (CNN)The two U.S. soldiers say they used physical force to drive home their message to the Afghan police commander who had been sexually abusing a boy.

“I picked him up, threw him to the ground multiple times and Charles did the same thing,” Dan Quinn, who was a U.S. Army captain at the time, told CNN. “We basically had to make sure that he fully understood that if he ever went near that boy or his mother again, there was going to be hell to pay.”

The actions of Quinn and the other soldier, Sgt. 1st Class Charles Martland, against the American-backed police commander displeased their superiors in the U.S. military.

Quinn says he and Martland were relieved of their duties shortly afterward. Quinn has since left the military and Martland is now being involuntarily separated from the Army.

They had directly confronted a thorny issue for U.S. forces in Afghanistan: the subculture of bacha bazi, or “boy play,” in which young Afghans are used as sex slaves by grown men.

For U.S. service members in Afghanistan, the abuse of children is infuriatingly hard to stop, especially when it’s carried out by Afghan commanders allied with American-led forces.

Unable to step in

The New York Times reported this week that U.S. soldiers and Marines in Afghanistan have been instructed not to intervene in the abuse of Afghan boys by U.S. allies, even in some cases in which it’s taken place on military bases.

The Pentagon denies that telling soldiers to look the other way is official practice.

“We have never had a policy in place that directs any military member, or any government personnel overseas to ignore human rights abuses,” spokesman Capt. Jeff Davis said. “Any sexual abuse, no matter who the alleged perpetrator and no matter who the victim, is completely unacceptable and reprehensible.”

The abuse of boys by powerful Afghan men has been reported by CNN and other international news organizations in the past.

“I had a boy because every commander had one,” Mestary, a former commander of the Northern Alliance that fought against the Taliban, said in a PBS documentary, “The Dancing Boys of Afghanistan,” in 2010. “There’s competition amongst the commanders. If I didn’t have a boy, I couldn’t compete with the others.”

Terrorism expert Jessica Stern told CNN she has spoken to several U.S. service members who say they were disturbed by what they saw in Afghanistan.

“They must have felt they couldn’t respond in the way they would have liked to,” she said. “It was clearly a very painful subject.”

She said they believed that “the fear is that if we were to intervene, we wouldn’t have the kind of close working relationship that we need” with Afghan security forces.

The Afghan Interior Ministry said it received reports of sexual abuse of children by police officials in 2011 and 2012 but has since taken steps to address the problem.

“We have started taking the issue very seriously and have brought fundamental changes,” Sediq Sediqqi, a spokesman for the ministry, told CNN.

Quinn said he hoped Martland’s career could yet be saved.

“He is the best soldier I’ve ever served with,” Quinn said. “He’s the reason why I joined the Special Forces regiment, was to work with soldiers like Charles Martland. … All he wants to do is continue to serve our country with distinction.”

U.S. Rep. Duncan Hunter, a Republican from California, has taken up Martland’s case with Defense Secretary Ash Carter in an attempt to keep the solider in the Army.

“Martland stood up to a child rapist,” Hunter, a former major in the Marines, wrote in a letter to Carter last month. “I trust that you will give this case the attention it demands.”

But after a decade of training with U.S. forces, it seems some Afghan commanders are continuing the abuse unchecked.

CNN’s Kimberly Berryman and Masoud Popalzai contributed to this report.