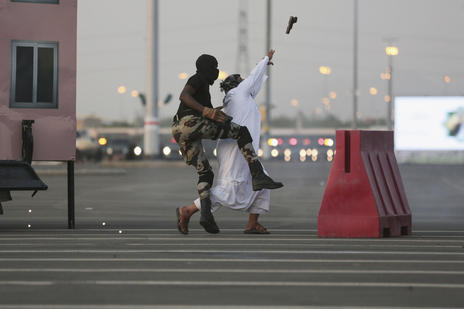 RIYADH, Saudi Arabia (AP) — Saudi Arabia said Tuesday that 34 nations have agreed to form a new “Islamic military alliance” to fight terrorism with a joint operations center in the kingdom, but the coalition does not include Shiite-majority Iran or Iraq, and it’s not clear how exactly it would function.

The announcement, published by the state-run Saudi Press Agency, said the Saudi-led alliance is being established because terrorism “should be fought by all means and collaboration should be made to eliminate it.”

However, the absence of Iran, Iraq and Syria, three countries battling the Islamic State group, raised questions about whether the alliance was intended to present a unified front against the extremists or Tehran, Saudi Arabia’s main regional rival.

Riyadh backs rebels fighting to overthrow Syrian President Bashar Assad, a key Iranian ally, and has been leading an Arab coalition against Iran-supported Shiite Houthi rebels in Yemen since March. It is also part of the U.S.-led coalition fighting the Islamic State group in Syria and Iraq.

The Saudi statement said Islam forbids “corruption and destruction in the world” and that terrorism constitutes “a serious violation of human dignity and rights, especially the right to life and the right to security.”

Saudi Deputy Crown Prince and Defense Minister Mohammed bin Salman told a news conference that the new coalition will develop mechanisms for working with other countries and international bodies to support counterterrorism efforts. He said their efforts would not be limited to countering the Islamic State group.

“Currently, every Muslim country is fighting terrorism individually … so coordinating efforts is very important,” he said.

Saudi Foreign Minister Adel al-Jubeir told reporters in Paris that members could request assistance from the coalition, which would address the requests “on a case-by-case basis.”

The new counterterrorism coalition includes nations with large and established armies such as Pakistan, Turkey and Egypt, as well as war-torn countries like Libya and Yemen. African nations that have suffered militant attacks, such as Mali, Chad, Somalia and Nigeria, are also members.

It was not immediately clear what role, if any, the United States would play in the coalition. U.S. Defense Secretary Ash Carter said he is looking forward to learning more about what Saudi Arabia has in mind.

“In general, at least, it appears that it’s very much aligned with something that we’ve been urging for quite some time, which is greater involvement in the campaign to combat ISIL by Sunni Arab countries,” Carter told reporters during a visit to Incirlik Air Base in Turkey, referring to the IS group by one of its acronyms. He said he’d like to talk to the Saudis about the plan so he could learn more about it.

A senior defense official said the U.S. did not know in advance about the plan for the alliance, and that officials were working to find out the details. The official was not authorized to discuss the matter publicly so spoke on condition of anonymity.

Prime Minister Ahmet Davutoglu of Turkey, the only NATO member in the new coalition, called it the “best response to those who are trying to associate terror and Islam.”

“We believe that this effort by Muslim countries is a step in the right direction,” Davutoglu said.

Smaller member-states included in the coalition are the archipelago of the Maldives and the Gulf Arab island-nation of Bahrain, which is home to the U.S. Navy’s 5th Fleet.

Other Gulf Arab countries such as Kuwait, Qatar and the United Arab Emirates are also in the coalition, though notably absent from the list is Oman, a neighbor of Saudi Arabia. In recent years, Oman has maintained a neutral role and has emerged as a mediator in regional conflicts, serving as a conduit from the Gulf Arabs to Iran.

A Jordanian government spokesman confirmed that the Hashemite kingdom is part of the coalition. Spokesman Mohammed Momani would not comment specifically on the alliance but said that “Jordan is always ready and actively participates in any effort to fight terrorism.”

A Lebanese official confirmed to The Associated Press that his nation was also part of the 34-nation coalition. Tiny Lebanon has seen frequent spillovers from Syria’s civil war next door, as well as sectarian clashes and militant attacks.

“Lebanon is fighting a daily war against terrorism … Lebanon cannot but be part of the alliance that is combating terrorism,” said the official, who spoke on condition of anonymity because he was not authorized to give official statements. Asked how Lebanon plans to contribute to the alliance, he said that “these are details that we haven’t gotten into yet.”

Benin, while it does not have a Muslim majority, is a member of the new coalition. All the group’s members are also part of the larger Organization of Islamic Cooperation, which is headquartered in Saudi Arabia.