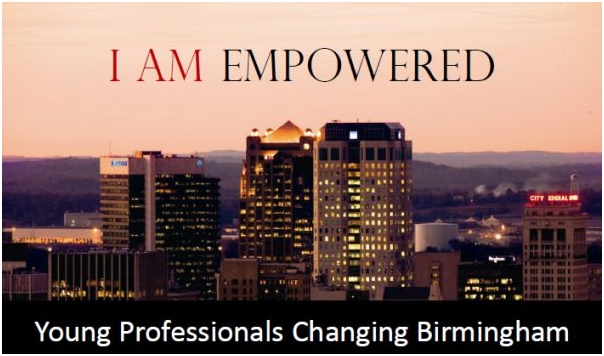 For the past 10 years a group of young professionals have met in Birmingham to become a part of the change they’ve wanted to see.

The Birmingham Urban League Young Professionals (BULYP) has hosted regular membership meetings, community forums and has identified opportunities for civic participation over the past decade.

As the group prepares to celebrate its 10 anniversary plans are underway to expand work being done to empower their communities and change lives through the Urban League Movement.

That means events such as one last week at Rising Sun Baptist Church in West Birmingham where the group held a Black History Month program that included a $500 essay contest for city school students.

“One thing we like to do is to give back to the community,” said Kamonte Kelly, president of BULYP. “We hear the negative and we hear the bad connotations.

“There’s a lot of good, there are a lot of great things coming out of the Birmingham school system and Birmingham as a whole,” said Kelly, a Wenonah High School grad. “And for the youth to see young professionals come back and reach back . . . that gives them hope, and that lets them know someone is acknowledging what they’re striving to do and it’s not all in vain.”

The BULYP is a Birmingham Urban League volunteer auxiliary that targets young professionals ages 21-45. The YP mission is to support the Urban League through volunteerism, philanthropy and membership development.

The group currently has 63 members and the goal is to have at least 100 active members or more by the end of the year, say leaders.

A number of key initiatives are being planned for this year including a focus on crime reduction, a fair living wage and voting.

“We are talking about any kind of issues or concerns within the community,” said Ashley Newton, who is advocacy chairperson for BULYP. “We’re in an election season. It is important that the advocacy committee be a part of making sure the community is aware of the ability to vote, which candidates are available to vote for, the delegates that are running for the different candidates, what the parties are speaking about.”

Kelly said, “we want individuals to know that their vote counts. We’ve had forefathers who have lost lives and marched just so that we can have that right to vote, and we want to make sure that legacy continues by making sure we are registered to vote and by showing up at the polls and casting our ballots.”

The group also wants to make sure that its network of young professionals meets challenges that their peers may face.

“As you can see the demographics in Birmingham are changing,” said Kelly, who works in banking. “Our younger generation is starting to become leaders in the community by becoming executives and higher ups within their professions. Even in city government younger professionals are starting to take leadership roles.”

Newton, who works in technology for a utility company, said the BULYP is diverse in how it tackles problems that face the community.

“There is no one way to do anything,” she said. “If you don’t have that diversity of different ways of looking at things, then you’ll be one-sided and we don’t want any initiatives or plans we come up with as an organization to be one-sided. We want to be able to see all sides, think outside of the box and reach people outside of the box.”

Members are encouraged to “be the change that you want to see,” Newton said. “Oftentimes young professionals say, ‘I am here in Birmingham, I want to see this, I want this to happen, I want to do something different.’ (If that is the case) then go out and be that change.”

William A. Barnes, interim President and CEO of the Birmingham Urban League, spoke Sunday on the importance of young people and their role in change.

“Every generation historically has had an opportunity to lead itself. This generation should be no different,” he said. “We had a saying that we started about two and a half years ago when I was involved with the (Urban League’s) national young professionals: ‘We got now.’”

Barnes said he is sensitive to the role of young professionals in civil rights organizations often headed by elders.

“This is not our grandmother’s or our father’s civil rights movement, but it’s still a civil rights movement nonetheless,” he said. “It’s important to remember we still need the wisdom of our elders to continue to guide us. We’re not taking over. We are here. We are raising our hand. We are working and we are willing to listen to those that who pour additional wisdom into what it is that we’re doing.”

Kelly said the group holds a general body meeting the third Thursday of every month at the Birmingham Urban League headquarters, 1229 3rd Ave. N from 5:30 p.m. to 6:30 p.m.

Anyone interested in more information on the group or joining can the find Birmingham Urban League Young Professionals on Facebook or at BULYP.org.