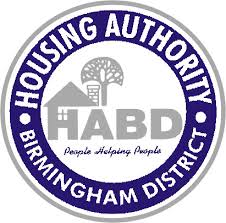 The president/CEO of the Housing Authority of the Birmingham District has begun talks for major long-term overhaul of a 52-year-old complex in the North Birmingham Community.

Housing Authority of the Birmingham District President/CEO Michael Lundy, recently sat with Birmingham city leaders, including Councilman William Parker and residents to discuss the current state of the Collegeville Neighborhood and North Birmingham Community and the role HABD will play in its future.

Lundy then discussed his ideas for Collegeville Center and asked for the community’s insight.

Lundy said there are several long-term options for the complex including total demolition, remodeling or partial demolition and replacing the units away from the current Collegeville site. Partnerships with public and private entities are among other options.  The neighborhood group also discussed the idea of replacing the traditional, institutional public housing complex by integrating residents into the overall neighborhood.

“We have numerous options to redesign and improve this neighborhood, and the meeting with residents and community leaders is essential in crafting the right approach,” Lundy said. “This is the first of many conversations to come.”

The meeting began as a meet-and-greet as Lundy was introduced to round table of residents and community leaders. Then it was time to discuss business as Lundy received an overview of work already underway to improve the area that includes HABD properties, Collegeville Center and North Birmingham Homes.

Lundy, who took over leadership at HABD in February, has spent the last few months touring public housing communities and nearby neighborhood throughout the city. It is part of his “listen, learn and lead” approach.

Lundy was also briefed on the existing community redevelopment plan for North Birmingham. Moves by HABD would complement those existing goals, he said.

HABD is already planning for major overhauls at Southtown Court and Loveman Village.

Parker, whose district includes Collegeville and much of North Birmingham, called it refreshing to sit one-on-one with senior HABD officials. He cited ongoing work to improve the neighborhood, including environmental cleanup by the Environmental Protection Agency, construction of a vehicle and pedestrian railroad overpass and park improvements as evidence that improvements are coming the area.

Parker said the partnership with HABD is another essential element, as both the city and HABD serve the same constituents.

“It was a great opportunity to come out and meet community leaders, pastors and residents to say hello and say how we can all collaborate to address the issues in the North Birmingham Community. I look forward to a great partnership as we move forward,” Parker said. “Having a housing director who wants to be a part of the overall North Birmingham family is a positive step forward.”