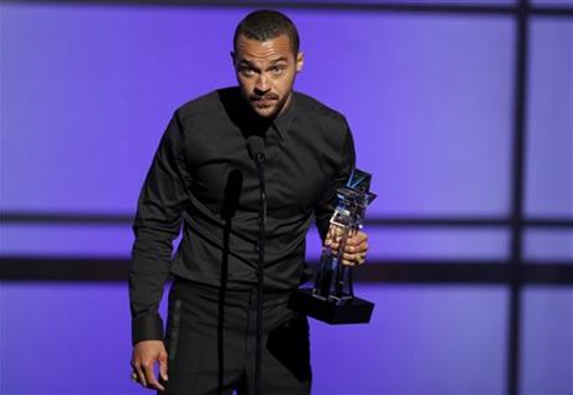 LOS ANGELES (AP) — Actor Jesse Williams brought the energy of a civil rights rally to the BET Awards Sunday night as he accepted the humanitarian award, demanding equal rights and calling for an end to police brutality against black people and white appropriation of black culture.

The “Grey’s Anatomy” star brought the Microsoft Theater audience to its feet with his passionate speech.

“A system built to impoverish, divide and destroy us cannot stand if we do,” he said, adding, “We know that police somehow manage to deescalate, disarm and not kill white people every day.”

Williams compared spending money on brand-name clothing to the days when slaves were branded with their owners’ markings. He said it’s not the job of the brutalized to comfort the bystander.

“We’re done watching and waiting while this invention called whiteness uses and abuses us, burying black people out of sight and out of mind while extracting our culture, our dollars, our entertainment like oil, black gold, ghettoizing and demeaning our creations then stealing them, gentrifying our genius and then trying us on like costumes before discarding our bodies like rinds of strange fruit,” he said.

Backstage, Williams said he hopes his remarks during the show remind people “just because we get to be here tonight doesn’t mean we made it.

“What I’d like to see us do is return to a space where it’s OK for folks to be proud and outwardly black in public,” he said, “and not have to feel like we have to be safe to live in white spaces and to make everybody comfortable when we’ve spent centuries being uncomfortable. It’s time to shed that fear.”

The BET Awards — or “The Prince Tribute Show” — featured emotional and energetic performances from Sheila E., Stevie Wonder and Jennifer Hudson honoring the Purple One, along with political statements on issues ranging from racial injustice to the U.S. presidential election.

Sheila E., jamming on the drums and guitar, singing and dancing without shoes, closed the three-hour-plus show at the Microsoft Theater in Los Angeles with “Let’s Work,” ”A Love Bizarre,” ”The Glamorous Life,” ”America” and more. She was joined by “Purple Rain” actor Jerome Benton and Prince’s ex-wife, Mayte Garcia, who danced alongside the background dancers throughout the set. They ended by raising a purple guitar in the air as the audience cheered them on.

Hudson, rocking a white-hooded blazer, and Wonder, clad in a purple suit, sang “Purple Rain” — a month after the piano-playing icon performed the song with Madonna at the Billboard Music Awards, which BET dissed on Twitter. This time, Hudson was a vocal powerhouse, delivering screeching vocals while Wonder played piano and Tori Kelly was on guitar while a photo montage of Prince appeared on the purple-lit stage.

Janelle Monae was animated and funky as she danced skillfully and ran through Prince tunes, including “Kiss,” ”Delirious” and “I Would Die 4 U.” Bilal was sensual and passionate during “The Beautiful Ones,” even lying on the floor while singing near the end of the performance. The Roots backed Bilal, and the band was also behind Erykah Badu as she performed “The Ballad of Dorothy Parker,” singing softly as she grooved in place.

After singing an original song, Maxwell went into “Nothing Compares 2 U,” changing some of the lyrics while honoring Prince.

Though the BET Awards were heavy on honoring the icon who died on April 21, the show went from Prince to political throughout the night.

“I’m really not political but it’s serious out here, and for those who think that, you know, ‘Oh he’s not going to win’ — think again. So we really need to pull together and turn this country around,” she said.

Co-host Tracee Ellis Ross said she was supporting Hillary Clinton and reminded viewers several times to “get yourself registered!” Clinton has a past with BET: She appeared at BET’s “Black Girls Rock!” event in April and told the audience “my life has been changed by strong black women leaders.”

The BET Awards wasn’t all serious, though. Beyonce kicked off the show with a surprise performance featuring Kendrick Lamar and multiple background dancers of her song “Freedom,” dancing in a pool of water to the song’s heavy beat. At one point, Lamar and Beyonce kicked the water and danced in sync, drawing a heavy applause from the audience.

Beyonce won video of the year and the fan-voted viewers’ choice award for her hit “Formation.” Her mother, Tina, accepted the awards and said Beyonce had to quickly leave the show after her performance for a concert in London.

“I want to thank, first of all, her husband and her daughter,” Tina said onstage.

Alicia Keys slowed things down with a performance of “In Common”; Fat Joe, Remy Ma and French Montana were energetic during “All the Way Up”; and Desiigner was excited as he rapped “Panda” onstage and in the middle of the aisles, as most of the audience nodded and sang along.

“Thank God, thank my mommy, thank my granny. This is my first award ever,” Tiller said, who was also nominated for video of the year.

Drake, who didn’t attend the show though he was the top contender with nine nominations, won best male hip hop artist and best group with rapper-singer-producer Future.

Samuel L. Jackson received the lifetime achievement award and was introduced by Spike Lee. Jackson ended his speech by offering praise to Williams, calling him “the closest thing I’ve heard to a 1960s activist.”

“That brother is right and he’s true, and when you hear what he said, make sure you vote and you take eight more people with you to vote, OK?” Jackson said. “Don’t get tricked like they got tricked in London!”

Prince wasn’t the only icon honored Sunday — Muhammad Ali was remembered by his daughter and Jamie Foxx.

“To me and my eight sisters and brothers, he was just dad,” Laila Ali said onstage. “My father also once said, ‘If people loved each other as much as they loved me, it would be a better world.'”

Foxx said Ali “stood up at a time when no one was standing up. So it’s definitely more than boxing, more than entertainment.”

Ali died June 3 after a long battle with Parkinson’s disease.