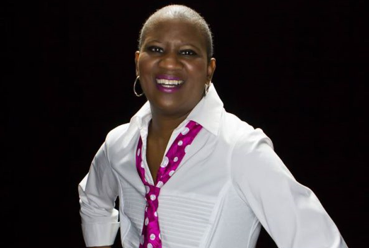 It’s not the normal reaction you’d expect for a diagnosis of breast cancer. But when you’re a comedian, your slant on normal events can take unexpected turns. And frequently does.

“I could be depressed and cry about it, or I could laugh,” said Comedian Carla Youngblood. “I chose to laugh.”

How it all began

She considers her walk through a breast cancer diagnosis an opportunity to tell the story about how God brought her through using her faith. Youngblood is the youngest of five children and regularly entertained her family to get attention. She’s a Birmingham-Southern College graduate, with a professional background as a certified public accountant for nearly 20 years.

In search of more fulfilling work, she eventually obtained her Realtor’s license, becoming an agent at RealtySouth. One night, her company hosted a comedy night at the Comedy Club StarDome and she performed. Youngblood gave herself a thumbs up and the light of stardom was birthed.

Youngblood started her stand-up comedy routine five years ago, a realization of a dream that she’s always held from childhood. She began her career by hosting events at churches and various other venues.

One night, just before appearing on stage for a show, she was asked her name. “Stage name?” she thought. “I don’t have one and hadn’t thought about it before now.”

But almost in an instant, she remembered a particular event. “My girlfriend had gone to see Beyoncé and called her “The Truth” – meaning she put on a great show. So at that moment I thought, I put on great shows, so I should be called “The Truth,” too.

The host put that stage name down and it has traveled with comedian Carla “The Truth” Youngblood ever since.

Youngblood will appear at the Kappa Komplex 45 6th Ave. S. on Thurs. Oct. 27 during Magic City Classic weekend. Earlier this month she performed at the Carver Theatre in downtown Birmingham. Hundreds laughed as Youngblood talked about life, love and shared her story of survival. She performs to bring awareness to breast cancer.

The power of positivity

Youngblood was diagnosed with breast cancer in October 2015.

None of her immediate family had ever been diagnosed with the disease, but through testing, she found that she had a genetic cancer. Youngblood said the finding provided a bit of relief “because there may not have been much I could have done to avoid the diagnosis.”

She mustered the faith to fight the diagnosis head-on and hasn’t looked back.

“Throughout this whole thing, I’ve never had one day where I’ve been sick. That includes rounds of chemotherapy, radiation … even after my double mastectomy; not one day sick.”

“I never stopped eating,” said Youngblood. “I ate too much probably. I ate before, during and after all of my treatments. I never faced any diet restrictions.”

And with all of the trials, her attitude has remained undauntedly upbeat.

“I think my positive attitude has had a lot to do with me experiencing few negative side effects from cancer treatment. I never thought about how sick I was going to be, I focused on how to encourage others to go through this,” said Youngblood.

A visit to her website shows Youngblood has recorded videos shaving her head, after chemo and after the double mastectomy.

“I’ve been doing comedy for five years and the diagnosis came last year. I captured it through Facebook and my website and basically kept the whole process very public. I knew with me doing comedy, the word would get out, so I never tried to hide it.”

Youngblood realized early on that she did not have to fight alone.

“I’ve had a tremendous outpouring of people who wanted to help. I have a circle of eight ladies called TLC, or the Too Live Crew. They took care of me before and during this process.”

Her friends, or TLC, hosted “Truth Day” last March. They hosted people at a local park and asked for donations to help with Youngblood’s expenses during medical treatment. The event was a success.

Youngblood calls herself a survivor, and when asked what encouragement she’d give other women with a diagnosis of cancer, she didn’t hesitate.

“I know I have been given a second chance at life, not just for myself, but to be an example and inspire others all over the world. I would encourage other women by telling them to focus on the results they desire with their health and every other area in their lives. I would tell them to write their own story.”

For more information on Carla Youngblood’s upcoming shows and more of her very public journey, go to www.keepyoulaughing.com.