The Housing Authority of the Birmingham District

Residents of Morton Simpson Village and the surrounding Kingston neighborhood agreed: they must work with the same vigor they had when successfully demanding a new fire station now to address crime in their community.

The Housing Authority of the Birmingham District (HABD) brought together city leaders and police officials to present an update on crime fighting activity and get firsthand input from Morton Simpson residents.

“We’re going to attack this issue like we did the fire station, and that’s with all of us working together,” said Councilman William Parker, whose district includes Morton Simpson.

Both Parker and Mayor William Bell referenced plans for the new Kingston fire station and reminded the audience that it shows what can result from their activism and participation.

The meeting, which was held on Nov. 3, was the second in a series of community gatherings presented by HABD. The first town hall meeting was in October at Marks Village in the Gate City Community.

“We know who is bringing turmoil into this area,” Bell said. “By working together and using all of our resources, we can make things happen. I’m here to be supportive and do whatever I can do as your mayor.”

The gunfire detection system will be expanded to cover the area of Marks Village in the Gate City neighborhood. ShotSpotter, a system of sensors used by the Birmingham Police Department to locate gunfire, is expanding to include the east Birmingham community this month. Coverage already includes Morton Simpson and nearby Tom Brown Village, officials said. The system has proven to be a vital tool in investigating criminal incidents, police said.

The gun buyback is set for Saturday, Nov. 19 from 9 a.m. to 12 p.m. at both Morton Simpson Village and Marks Village. No questions will be asked, and up to $50 cash will be paid for the firearms.

There is no single solution and each initiative works to support the other, said Michael Lundy, President and CEO of HABD.

“We all must stand united against anything that threatens the peace and quality of life in our communities,” Lundy said. “Our success depends heavily on neighborhood involvement.”

The housing authority recently unveiled a multi-point security plan that includes hiring a director of public safety, a zero tolerance policy for guns, increased police patrols and a call for greater resident engagement.

Lundy said infrastructure improvements are coming to Morton Simpson, but “what good is all that if the community is not safe?”

“Chief A.C. Roper and his staff are working closely with the housing authority to tackle crime in our communities and in seeking new ways to address and reinforce public safety,” Lundy said. “This is our job, this is our responsibility and we will not back down.”

The town hall meeting came at the invitation of Eldridge Knighton, president of the Morton Simpson Village Residents Council.

Knighton delivered a blunt assessment regarding safety in the area and called for greater self-responsibility among residents. Knighton, who was also raised in the area, said he could remember at least a dozen homicides.

“I know the truth about what’s going on in this community,” he said. “I’m fed up. Something has to be done.”

He also dismissed notions that violence is imported by outsiders as a flimsy excuse. Rather, Knighton said, the ‘outsiders’ are usually friends and relatives of residents.

“You are accountable for your guests,” he said. “How many ‘outsiders’ come in? They have to know somebody. I will work hard for my people, but I will not be a fool.”

“You are here because you want your neighborhood to be safe,” she said. “You have to be mindful of who you let into your community. It doesn’t matter whether you live in Greystone or here – this is your home.” 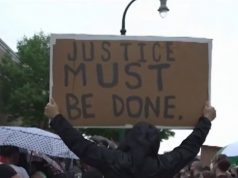