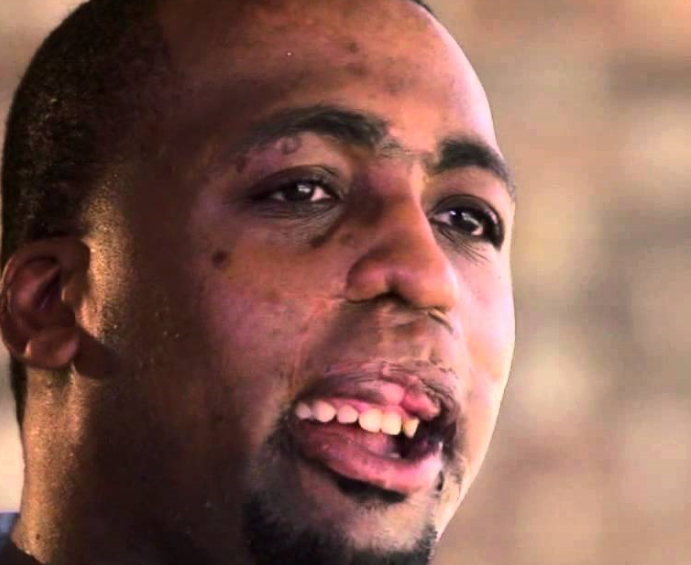 A mother’s natural instincts usually lead her to protect, nourish, nurture, and provide—but that apparently was not the case with Demetrius Guyton’s mother.

When Guyton was 2 months old, his mother bottle-fed him hydrochloric acid in attempt to collect the proceeds from a $25,000 life insurance policy. The assault left the baby boy permanently disfigured and emotionally wounded. In 1985, his mother was convicted of first-degree assault against a minor and sentenced to 15 years in prison.

Guyton, 32, now an ex-convict, evangelist, and published author, spreads his ministry through his book, “The Chosen One: A Touch from Above.”

“My mother may have permanently disfigured my face, but she didn’t disfigure my will to live life,” he said. “For many, high self-esteem is a result of confidence in their physical appearance. For me, confidence lies within my purpose. People see my scars, hear my story, and they’re befuddled by the principles of forgiveness that surround my story. It’s beautiful, they’re instantly prompted to forgive the people that caused them pain. And for me, that outweighs the burden of my scars.”

Some of what happened the night he was disfigured remains unknown, Guyton said.

On July 16, 1984, Barbara LaShelle Guyton, then 21, bottle-fed her 2-month-old son hydrochloric acid at the Walker Regional Medical Center in Jasper, Ala.

“People often ask me, ‘If she tried to poison you in the hospital, what got you there in the first place?’” Demetrius Guyton said. “I always tell them that that bit of information remains a mystery until this day. That night, my parents were out partying and my [paternal] grandmother was keeping me when I began violently vomiting.”

Guyton said his grandmother called his parents to pick him up and take him to the hospital.

“My father dropped us off at Walker hospital and came back with the acid bottle that my mother ended up feeding me,” he said. “As I began regurgitating the acid, it severely burned my face, throat, and stomach lining, and it collapsed my nasal passage.”

After spending a year in the burn unit at Children’s Hospital in Birmingham, Guyton was released into foster care. He spent four years in the system before his father’s mother, the late Ruthie Mae Dunlap—“Grandma Ruthie”—took custody of him when he was 5 years old.

After 54 surgeries and time spent time in prison for assaulting a man he caught cheating with his first wife, Guyton had a story to tell about his transition to a life restored.

During the three-plus years he spent in state correctional facilities, he began to study the Bible.

“God pulled me to the side during lock up and revealed Himself to me,” Guyton said. “It was a whisper in my ear, and it threw me for a loop because I was half asleep in my cell. But I heard His voice, and He said to me, ‘I love you. I have a purpose for your life, and I want to use you for my glory.’ It’s amazing how He appears at your darkest hour.

“In prison, I had to forgive myself for the things I’d done to land myself in that position, and I had to forgive all the people that ever caused me pain. But first I had to rectify where all my hurt and anger came from. I was a hurt individual, and I had trust and abandonment issues. I wound up in prison behind the same thing that got my mother locked up: assault.

“I came home one day and found my first wife in an act of adultery, and I assaulted the man. I was blinded by betrayal, and in prison I realized that the abandonment I felt by my ex-wife’s indiscretion all stemmed from a lifetime of mockery and ridicule that started with my mother. I had to fully forgive her in order to fix the pain within myself.”

For years, Guyton had no memory of his mother; he had not been in contact with her since the night she assaulted him. Immediately following his release from prison, he flew to St. Petersburg, Fla., to meet her and ask why she poisoned him.

“When I finally got to ask her, all she could utter was, ‘I wish I’d never met your father,’” Guyton said.

“I don’t really have any contact with [my mother] today,” he continued. “She was willing to meet me, but I guess she felt too guilty to have a real relationship with me. I forgave her, though, and I love her as Christ loved the church”.

Asked what living life with such severe scars has been like, Guyton said, “Living life with this face has been horrible and beautiful at the same time. People unveil their scars to me when they see the strength that allows me to bare mine. When I minister to others, I’m also ministering to and healing myself. When I preach forgiveness, it’s because it is my assignment, and I’m doing so because I know that it is the ultimate restoration of yourself. You are fearfully and wonderfully made the way you are. I want people to live in that freedom.

“Forgiveness is the apex of life. Jesus went through the ultimate sacrifice to show us all how deeply forgiveness is supposed to go. Jesus prayed for his crucifiers, so can you.”

Guyton is currently seeking funding to start a foundation—Grandma Ruthie, named for his grandmother—for childhood burn victims and abused children. Donations to the organization can be made at www.dpguyton.com. And his book, “The Chosen One: A Touch from Above,” can be purchased at Amazon.com.