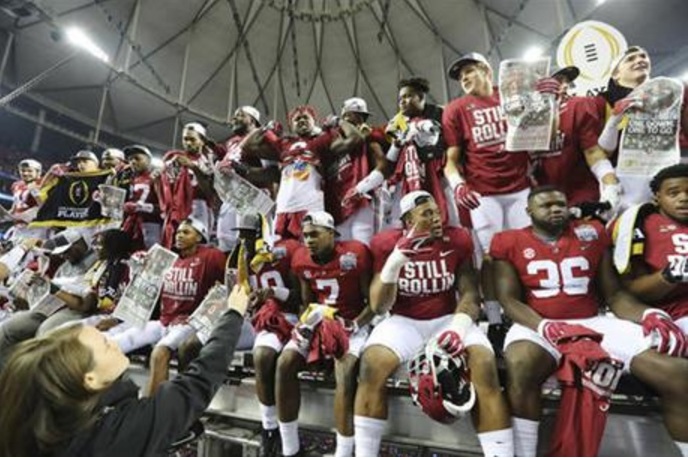 Get ready for a blockbuster sequel.

It’s Alabama vs. Clemson, The Rematch.

The top-ranked Crimson Tide will take on the No. 3 Tigers in a do-over of last season’s national championship game, a 45-40 thriller won by Alabama.

If the Jan. 9 matchup in Tampa comes anywhere close to that classic in the desert, it will more than make up for two semifinal duds on Saturday.

Alabama (14-0) wore down No. 4 Washington for a 24-7 victory in the Peach Bowl, while Clemson dominated No. 2 Ohio State 31-0 in the Fiesta Bowl, handing Urban Meyer the first shutout of his coaching career.

The Tide opened as a touchdown favorite .

“They are who they are because they’re the best, they’re the standard,” Clemson coach Dabo Swinney. “We’re excited. If you’re ever going to be the best, you’ve to beat them. It’s going to be an unbelievable game. I’m glad we’ve got a shot. That’s all we can ask for.”

Alabama will be going for its fifth national championship in eight seasons, a run that already has stamped it as one of the greatest dynasties in college football history.

If coach Nick Saban claims another title, he will join Bear Bryant as the only coaches to win six titles in the poll era.

Clemson (13-1) will be going for the second national title in school history, having come up just short a year ago.

The Tigers wanted another shot at Alabama all along.

“Of course,” said Clemson quarterback Deshaun Watson, who turned in a virtuoso performance in the Fiesta Bowl, much like he did in last year’s title game. “They’re the best of the best. You’ve got to earn it.”

Alabama has been dominant all year long, surviving a close call at Ole Miss early in the season but winning every other game by double-figure margins.

The Tide went old school on Washington, wearing down the Huskies with its stifling defense and a powerful running game, overcoming an off day for freshman quarterback Jalen Hurts.

Bo Scarbrough , a second-string running back who has come on strong late in the season, rushed for 180 yards and two touchdowns in the Peach Bowl. He figures to play a big role in the championship game.

But everything at Alabama starts with the defense. The Tide leads the nation in most major categories and has even helped out the offense by scoring 11 touchdowns, including Ryan Anderson’s interception return for a score just before halftime in the Peach Bowl, putting his team firmly in control against the Huskies.

“They can get in a quarterback’s head,” said Washington quarterback Jake Browning, who threw two interceptions and was sacked five times.

Clemson endured an up-and-down year that included close victories over Troy and North Carolina State, and a shocking loss at home to Pittsburgh.

But the Tigers, led by Heisman Trophy runner-up Watson, are playing their best when it matters most.

The victory over Ohio State was dominant in every way.

“That’s our best four quarters of the year,” Swinney said. “We were at our best on the biggest stage.”

Well, not quite the biggest.

The next game is the one Clemson has been aiming for since the Tigers walked off the same field in Arizona having come up just short against Alabama.

“It’s gonna be a heck of a ballgame down in Tampa,” Swinney said. “Let’s get it on.”