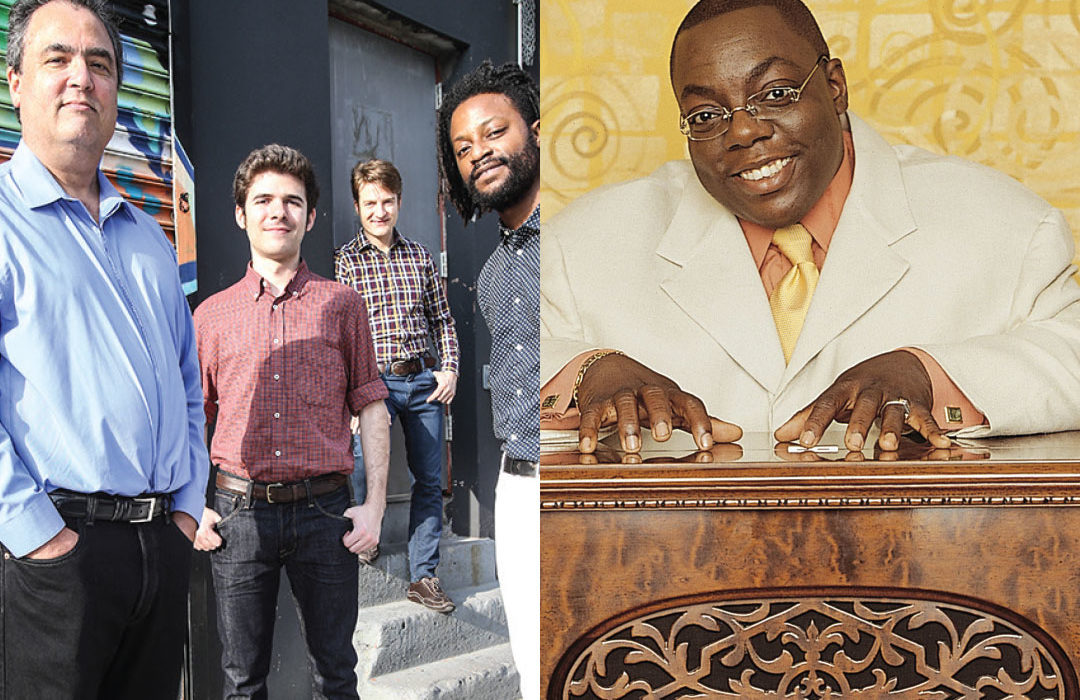 JOHN MORGAN at the StarDome, 7 p.m.

JUKE JOINT DUKES and JOELL REGAL, 9 p.m. at The Nick.

FANCY FRIDAYS, 5 p.m. featuring JILLIAN GRAY with YARBROUGH & COMPANY every Friday at Legends on 18th Street North, Downtown Birmingham. This is an After Work Experience hosted by Keely and Tiger and catered by Chef Jones. Call (205) 212-4406 for more.

NERVES BADDINGTON, FLEETWOOD DEVILLE and SLANGUAGE (Of Pen Pals), 9 p.m. at the Nick.

BAG OF HUMANS, ICARUS SYNDROME and ONE DAY CLOSER, 9 p.m. at The Nick.

ATTORNEY GENERAL LORETTA LYNCH LEGACY SPEECH, 3 p.m. at the 16th Street Baptist Church. This is her final speech as Attorney General. People of all faiths and political persuasions are encouraged to attend.

ELYSIAN FEEL, HEY and SUZANNE at The Nick.

THE GUMPS, THE MURDER OF JANE CROW and VALORE, 9 p.m. at The Nick.

BO BERRY QUARTET, 7 p.m. to midnight every Friday at Jazzi’s on 3rd.

JAZZ AT THE LINCOLN CENTER ORCHESTRA with WYNTON MARSALIS, 7 p.m. at the Alys Stephens on January 18th, Wednesday. The Jazz at Lincoln Center (JALC) Orchestra, led by Wynton Marsalis, comprises 15 of the finest soloists, ensemble players and arrangers in jazz music today.  A special JAZZ & JAMBALAYA at 5:30 p.m. on the Sirote Theater stage including premium seating, post-show meet and greet with Wynton, and a three-course Creole style supper with cocktails.  Hoover High School FIRST EDITION will be opening for the JALC with Wynton Marsalis. For more, call (205) 996-6113.

JAZZ JAM SESSIONS, every Fourth Sunday, 6 p.m. at the Alabama Jazz Hall of Fame (Carver Theatre), except for Christmas.  Jam with GARY MOTLEY on January 22.

WOMEN’S NETWORK BIRMINGHAM – Mayor William A. Bell, Sr. to Deliver State of the City Address to The Women’s Network Birmingham (TWN)  – The Women’s Network Birmingham (TWN) is pleased to announce their featured guest speaker who will launch their first formal meeting for 2017 is the Honorable William A. Bell, Sr. – The Mayor of the City of Birmingham, AL.  Mayor Bell has consistently delivered his annual State of the City Address to this premier members-only organization and this year will be historic as well, over 150 of the members will be attending ‪tomorrow’s invitation only luncheon and meeting set for today to begin ‪at Noon at The Harbert Center. Mayor Bell will share his vision for 2017 and offer more insight into the wealth of opportunities available and the ways members of The Women’s Network Birmingham and the community, can continue to make “CONNECTIONS” – The 2017 theme for TWN speakers series.

BUSINESS AND BEER – A RISING STAR CELEBRATION – This event is a toast to the Rising Stars in Accounting, Health Care, Law, Money, Real Estate and Construction on January 26 at the Trim Tab Brewing Company.

TOP 40 UNDER 40 – This event is honoring the up and coming individuals that will be the leaders of tomorrow, February 18 at Iron City.

BBJ WORKSHOP EXPERIENCE INNOVATION – The BBJ and Dale Carnegie Training are hosting this workshop for those interested in learning why innovation is a mindset that must be cultural and promoted at every level of an organization.

FREEDOM? – An exhibition FREEDOM?, is at the University of Alabama in the Paul Jones Gallery, January 23 – April 28.

SLOSS FURNACES: THEN AND NOW – Lawson State College is presenting an exhibition entitled SLOSS FURNACES: THEN AND NOW by Adjunct History Instructor Gregory Wilson. This exhibition is covering the history of Sloss Furnaces National Historic Landmark and the rise of the Birmingham Industrial District. The exhibition is weekdays, 10 a.m. – 3 p.m. until February 28, at the ACATT Building, (Birmingham Campus). For more information, email: gwilson@lawsonstate.edu.

Where: Oak Mountain State Park- DETAILS: Enjoy a moderate day hike around the largest lake in Oak Mountain State Park variously called Beaver Lake, Oak Mountain Lake, and the Lower Fishing Lake. Most of this hike will be off the color-coded trails with some ups and downs. Share an adventure!  Bring a friend. Well-behaved, properly supervised children age 8 and up welcome. Arrive at the North Trailhead parking lot at 9:45 a.m. Hike will depart at 10 a.m. from the North Trailhead parking area. Bring $5/person ($2 seniors) park admission fee plus your picnic lunch and drink. DIRECTIONS: To get to the North Trailhead, take I-65 South from Birmingham to AL Highway 119/Cahaba Valley Road exit. Right off exit ramp, then left at first traffic light. Follow road 2 miles, then left at stop sign. Go 6 miles after you pay at the gatehouse on John Findley III Boulevard, the main park road.  Drive to the North Trailhead parking lot which will be on your left with two small buildings at the back. One is a portable toilet. The other is a changing room. Park in the North Trailhead parking lot and meet your leader there. Bring $5/person ($2 seniors) park admission fee plus your picnic lunch and drink. For more info, call David Shepherd, (205) 240-4681.

Read some cool library books and earn a circus ticket at the same time.

Ringling Bros. and Barnum & Bailey and BPL are partnering to host the Out of This World @ Birmingham Public Library! Kids can earn virtual badges and prizes including a Ringling Bros. circus ticket by simply reading. Children of all ages through 12th grade can register online or at one of BPL’s 19 locations. The BPL Reading Challenge ends on Jan. 22, 2017.

DEM W2’s CAN’T GET HERE QUICK ENOUGH, January 21, 9 p.m. at Bennie Mac’s On 1st with KAMPLIFE, MOPE WILLIAMS, DERRICK BROOKS, and SHEILA. It is hosted by Chitlin Circuit All Star BENNIE MAC. This show will bring you some of the most hilarious comics in the country from Bessma, Hampton, VA, Atlanta and Woodlawn. Call (205) 585-7273 for more.

THIS WEEKEND: JOHN MORGAN, Back by popular demand. “The Rajun Cajun” returns. He’s done almost everything from Showtime comedy appearances to MTV’s Spring Break. Now see this outrageous wild and hilarious comedian serve up a delicious platter of humor and great gumbo! You’ll have to take a breath from laughing with this one.

NEXT WEEKEND: MICHAEL BLACKSON. He has been called one of the most original stand-up comics in the country, and his performances leave audiences laughing in tears. Michael Blackson, aka, ‘The African King of Comedy”, has been entertaining audiences all across the country and around the globe for more than a decade. Inspired by the stand up comedy of Eddie Murphy, Michael began to develop his comedic talent in 1992 in the unkind comedy clubs of Philadelphia, Pennsylvania. Michael’s comedic appeal grew from his involvement with BET’s Comicview series, HBO’s Def Comedy Jam, Showtime at Harlem, and Live in Hollywood. However, it was in a Los Angeles comedy club where Michael got his big break. Michael was performing at the Comedy Store where actor/director Ice Cube was in attendance to see comedian Mike Epps perform.

REFLECT AND REJOICE, 3 p.m. at the Alys Stephens Center, in the Jemison Concert Hall. Actor BRANDON McCALL will perform excerpts from Dr. King’s “Letter from Birmingham Jail.”  Birmingham native and Noted Soprano ALISON SANDERS will be featured and CARLOS IZCARAY will conduct.

FIELD OF DREAMS AT THE NEGRO SOUTHERN LEAGUE MUSEUM (NSLM) – The Negro Southern League Museum is hosting a new event called Field of Dreams, a Martin Luther King Jr. Celebration, noon – 4 p.m. at the NSLM. The purpose of this event is to commemorate the dream of Dr. Martin Luther King, Jr. by recognizing the role baseball played in the Civil Rights Movement and the integration of American society. Event goers will tour the museum, meet former Negro League and Industrial League players and help create the Negro Southern League Museum’s Field of Dreams Humanitarian Baseball Collage! Guests will also enjoy free hot chocolate and cookies compliments of Royal Cup Coffee and Bud’s Best Cookies, music and food will be made available for purchase by Greg’s Hotdogs. This event is FREE and open to the public. For more details, follow the museum on Facebook and Twitter @NSLMBham or visit www.birminghamnslm.org. Join the Negro Southern League Museum as we celebrate the man, the dream and the game of baseball.

A MESSAGE TO THE FUTURE FROM THE KEEPERS OF THE DREAM – The Citywide-Montgomery 2017 Dr. Martin Luther King, Jr. Celebration is January 18, 6 p.m., at the Historic Davis Theatre in downtown Montgomery. A matinee of the event occurs that morning at 10 a.m. This will be the third annual celebration sponsored by both Alabama State University and Troy University-Montgomery at the incredible and historic venue of the Davis Theater, which highlights Dr. King’s “Beloved Community.”  The event’s executive director and producer is ASU’s dean of its College of Visual and Performing Arts (and acclaimed star of Hollywood television and cinema), Dr. Tommie ‘Tonea’ Stewart. The theme of the event is “A Message to the Future from the Keepers of the Dream,” which reflects the programs’ desire to move forward as we continue to bond as a community. This celebration is a joint effort of the Friends of the ASU Theatre, Troy University-Montgomery and The Alabama State University.

Opening of “¡NUEVOlution! Latinos and the New South” through May 31 . This one-of-a-kind project will explore the surprising ways that Latinos are shaping the South and the South is shaping Latinos. The heart of the project is a 3,500 sq. ft. bilingual exhibition which explores a topic that many historians consider to be the biggest story in southern history since the Civil Rights Movement. Woolfolk Gallery.

The winning entries of art work in various media produced by children of all ages who are visually impaired, blind and deaf/blind in Alabama will be announced and displayed. Milestones Gallery.