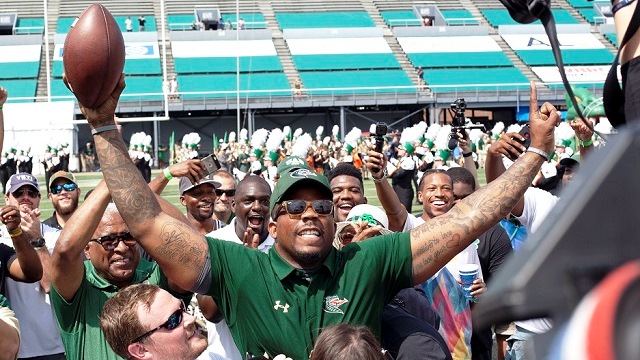 Reed and Donna Cooper headed to their car late in the third quarter of Saturday’s football game at Legion Field to get a head start on their drive to Columbus, Miss. They had driven to Birmingham years ago to see the UAB football team play.

And they expect to come back.

“It’s fun,” Donna said, adding that their son is an alumnus.

“We enjoyed the game,” Reed continued. “Huge crowd. I couldn’t believe the crowd.”

The couple was part of the announced record attendance of 45,212 who saw the Blazers rejoin the ranks of football-playing colleges and universities.

“The Return” gave way to “We’re back” as coach Bill Clark’s team defeated Alabama A&M of the FCS by a 38-7 margin.

But this was so much more than just a game. Football died on the Southside campus, shuttered because of reported shortfalls in the operating expenses and the need for football facility upgrades.

Saturday, UAB mascot Blaze could have answered to “Phoenix” because this program had truly risen from ashes. But this wasn’t the UAB football experience some would have remembered when last they played a real game at Legion Field.

Tailgating was going at high gear four hours before the 2:30 p.m. kickoff. And not just a few tents or campers. There were dozens that spanned the northeast corner of the stadium parking lot around to the west side.

Then there was the children’s play area, which had been beyond the north end zone. The stadium couldn’t contain this play area, which was instead on the practice field of McLendon Park just west of the stadium. It was part of Blazer Village, which also had expo booths, student tailgating and corporate hospitality tents.

The team buses arrived with players and coaches disembarking near the Graymont Avenue end of the western parking lot. That’s where a much longer Blazer Walk began.

They began walking through the UAB band and cheerleaders before their path went around to the north entrance, flanked every step of the way by adoring fans.

Craft O’Neal caught the Walk as it came by his tailgating station. He left his cellphone at home Saturday as he didn’t want anything distracting him from a moment of the festivities.

The chairman and chief executive officer of O’Neal Industries and other members of the Gang of Seven gave new meaning to the UAB battle cry of Gang Green. This group, formally the UAB Athletics Campaign Committee, delivered the dollars needed to spur giving from across the community, planting the seed of what was visibly blossoming Saturday.

“I think Birmingham decided it was time to step up and meet its potential as a city and UAB is the driver of our community,” he said. “It was a great investment and as you look around you’re seeing the return on that investment.”

The Gang of Seven and others may have invested more financially but no one’s gift tugged at the heart like that of Bennett Williams. The boy who took after his parents as an Ohio State fan developed a love for UAB, largely because of the green, fire-breathing dragon logo.

When he learned at the age of 5 that UAB football was going away and that millions of dollars were needed to save it, he sent a flotation device – the only dollar he had.

Saturday, Bennett, now 8, was thanked again for his generosity as he took part in the coin toss.

“We flew ourselves down; we were going to come down no matter what,” Brad Williams said of his wife, Amanda, and son, Bennett. “Graciously, UAB offered us tickets to the game and gave us the passes for the field before the game. It was really nice. It was not expected at all.”

But Bennett’s time on the field was overshadowed by that of Timothy Alexander, the paraplegic who became the face of UAB football. He decided two years ago what he would do when football returned.

With help from 2014 teammates, he rose from his wheelchair and walked 28 steps to hand the game ball to the officials.

“I just threw it out there with faith and met it up with action and we walked out today,” he said. “It was good just to show people what you can do if you believe. We passed the legacy over to this team. They wanted me to walk in and give the first game ball to the umpire.”

Gene Hallman and his Bruno Event Team were commissioned to enhance the game-day experience. He spent Saturday in a helicopter, monitoring traffic flow, parking and ticket lines while communicating with officials in the UAB Athletics Department, at Legion Field and Birmingham Police Department.

That information was also available in real time to fans online at www.blazergameday.com and via Twitter at @BlazerGameday. Hallman said it was so important he and his staff do everything possible to make the fans’ experience Saturday a very good one.

“We want them to return, again and again and build the fan base over time,” the Bruno Event Team leader said. “People now are appreciative that UAB has a football team and I think we’re going to have a lot of people coming who may never have come to a UAB football game before.

Homewood’s David Ytterberg was one of those first-timers. He spent a pleasant Saturday afternoon with his 5-year-old son, Ezra, who received a free ticket at his school.

“I’ve been here a long time,” the 33-year-old said. “I went to Auburn but am excited to see them back in the city.”

Sonny Best was another first-timer. The LaPine, Alabama, resident stopped at the Snoozy’s Bookstore near the front exit after the game was over.

“I was very proud of them,” he said. “I was proud to see they got their football program back and boys played a good game today … we’ll definitely be back.”