Or at least that’s what the name on the back of the jersey said.

Six-foot-7 Stacy Keely blocked a potential game-winning 30-yard field goal attempt with time running out to preserve a 23-22 victory for the Blazers over Louisiana Tech.

“That was actually my first block ever, blocked field goal ever,” said Keely, who wore “Juarez” on the back of his jersey.

Coaches often say it’s the name on the front of the jersey – the name of the team – that matters. Saturday as the Blazers celebrated a happy homecoming, the names on the back meant more.

University of Alabama at Birmingham paid tribute to the young patients and their families who have benefited from Children’s Harbor as those children have battled various diseases and conditions. Each player wore the name of a patient on his back rather than his own name.

Quarterback A.J. Erdely was the exception to the rule. He wore “CHILDREN,” perhaps to catch anyone not specifically recognized.

Keely met his honoree on the field after the game and took pictures with him.

“He’s a pretty nice kid,” the redshirt junior defensive lineman said after the game. “He said he had epilepsy (and) he’s a high school student from Decatur. He looked to be doing pretty well.”

UAB coach Bill Clark said the tribute to kids who benefit from Children’s Harbor was his idea. “But,” he said, “once I got it started, there were a bunch of us that got involved.”

Clark said each patient or his family will receive a replica of the specially designed jerseys used in the game.

Children’s Harbor hosted a few hundred children and family members at the game, including a meal in the Blazer Village UAB team tent. A few were on the sideline just before kickoff and four children went out with UAB captains for the coin toss.

Keely, who swatted the field goal attempt with his right hand, was a hero on the field. So, too, were Erdely, receiver Andre Wilson, running back Spencer Brown and linebacker Fitzgerald Mofor.

But there were heroes in the stands as well – children and their families who have endured myriad medical challenges.

“All the children with leukemia, cancer and all that – they’re the heroes of all of us,” Coldwater’s Tommy Eady said before the game. “Without them, we wouldn’t understand what really strong people were.”

Eady’s 9-year-old daughter, Miley, has been dealing with cancer since 2013. He said their family has had some close calls, including Jan. 9, 2016, when they were called to say their final goodbyes.

Alabaster’s Scott Weaver saw his twins, Kaitlyn and Jacob Weaver, with their names on jerseys. But Kaitlyn is the one who has been chronically ill.

“She has a bleeding disorder,” he said, rattling off her ailments. “She has juvenile rheumatoid arthritis. She has a connective tissue disorder. She has factor V Leiden (which can cause harmful blood clots). And she has two others that I probably couldn’t even pronounce. 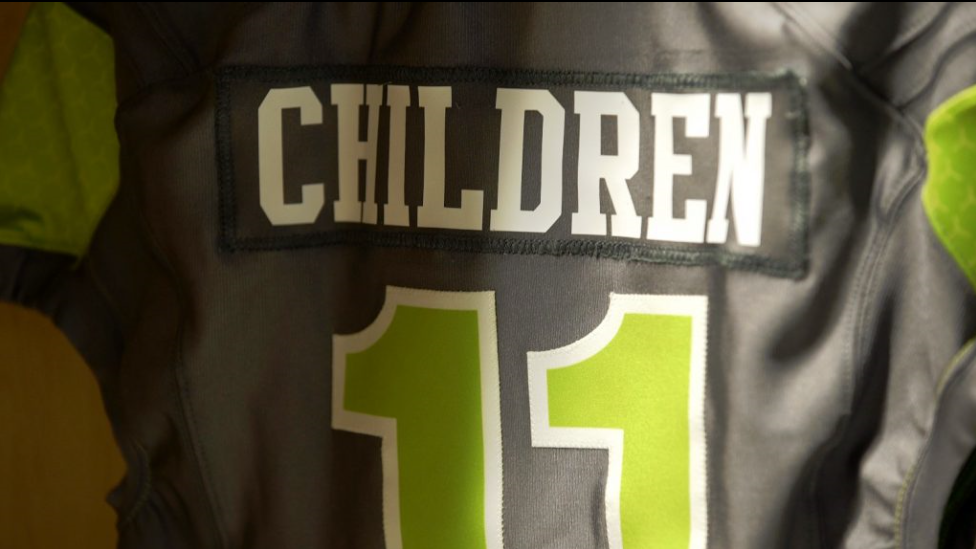 ‘Couldn’t have been any better’

Families describe Children’s Harbor as a haven, a place that provides a break from the hospital room where a patient’s stay can stretch from days to weeks, or longer.

And they appreciate the experience provided by UAB and Children’s Harbor. Connie Bailey was at the game with her daughter, Bethalyn Bailey, and sons Christian Bailey-Guadalupe and Cooper Bailey-Guadalupe. Bethalyn, a hemophiliac, and her brothers had their names on the backs of UAB football jerseys.

“To be included as part of the team and the community is a big thing for them,” she said. “Especially Cooper. He’s always wanted to play, so not being able to play but being a part of it kind of boosted his spirits.”

Victor Nunez Jr. was at the game with his 4-year-old daughter, Emaleigh “Emma” Nunez, who is in the maintenance stage of her fight with cancer.

“We’re from Louisiana and we’re LSU fans, so at least we’re able to see La. Tech,” he said, joking. “It’s wonderful that UAB’s doing this.”

The last-second win made it a great day for all Blazer fans.

“It all couldn’t have been any better,” Clark said. “Just getting to recognize them was as good a day as you could have, and then to have it end like this. It couldn’t get any better.”