African-Americans are more likely to develop late-onset Alzheimer’s disease than whites and are less likely be diagnosed with the condition, resulting in less time for treatment and planning, according to two University of Alabama at Birmingham (UAB) doctors and the National Institutes of Health (NIH).

Olivio Clay, PhD, a UAB associate professor of psychology, and David Geldmacher, MD, director the UAB Division of Memory Disorders and Behavioral Neurology, are examining health disparities in older adult minorities with Alzheimer’s disease and dementia, along with caregiving among minorities.

Clay also has done research to determine whether there are racial differences in caregiving and how well individuals adapt to their roles as caregivers. And he is currently helping with a national study that shows if a caregiver can increase social support then they can better care for a family member or loved one for a longer amount of time.

Clay said he would like to see more African-Americans included in Alzheimer’s and dementia research.

“Just like with any research, African-Americans are hard to recruit,” he said. “We want to see that the same things [with] other groups can be just as effective for African-Americans, as well.”

Why Some Disparities Exist

Alzheimer’s disease is an irreversible, progressive brain disorder that slowly destroys memory and thinking skills and, eventually, the ability to carry out the simplest tasks; it is the most common cause of dementia in older adults. Dementia is the loss of cognitive functioning (thinking, remembering, reasoning) and behavioral abilities to such an extent that it interferes with a person’s daily life and activities.

Several factors can explain why blacks are twice as likely to develop late-onset Alzheimer’s, said Geldmacher, who is also the Warren Family Endowed Chair in Neurology in the UAB School of Medicine. One is access to health care.

“Some of the important risk factors for developing Alzheimer’s involve cardiovascular health—things like high cholesterol, high blood pressure, and diabetes,” he said. “Historically, the African-American community has higher rates of those diseases and has had less success for treatment of those illnesses, either because they do not have access to care or are unable to follow through with care.”

The genetic aspects of the disease seem different among racial groups, as well. 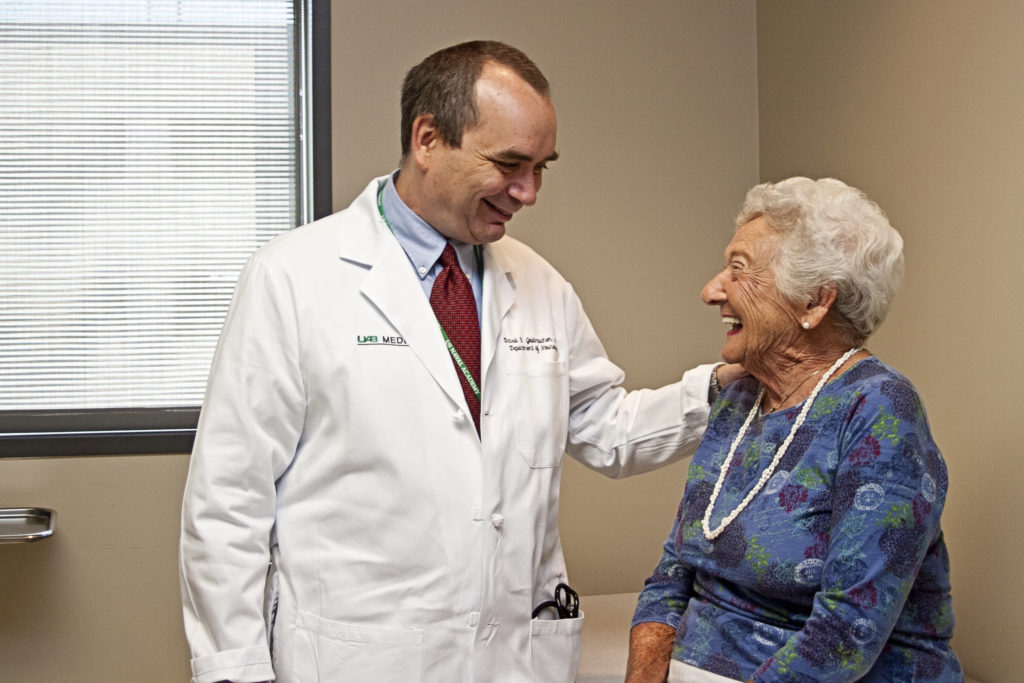 “Among white men in particular, there is the APOE gene, which has a very strong effect on the risk for Alzheimer’s disease,” Geldmacher said. “In African-Americans, that same gene seems to have less effect, probably because of other aspects of the genetic makeup.”

Preventing or delaying the disease plays an important role in reducing racial disparities in Alzheimer’s. According to the NIH, a few things must be considered in the disparities among African-Americans, including age and genetics.

Another factor to consider: vascular conditions. The NIH has found that “diabetes has been associated with risk of Alzheimer’s disease in many studies of non-Hispanic whites.”

Looking at Alzheimer’s as a whole, Geldmacher said there is a higher risk if a first-degree relative (a parent or sibling) had the illness.

“Your risk of developing the illness is about twice as much as someone who didn’t have that. It never gets to 100 percent, but as we get older and those baseline risks get higher, that magnifier of the twice as much becomes a greater risk,” he said. “If you have two first-degree relatives—say, two parents, two siblings, or a parent and a sibling—that doubles again. So, we’re talking four times the risk. That’s a very high risk for a lot of folks.”

Not all disparities are negative, however.

Clay said he has found that African-American caregivers are more resilient in their roles and show fewer signs of stress over time.

“Some of our studies have shown that when African-Americans rate how stressful their roles are, they rate the stressfulness associated with the role lower than Caucasians do,” Clay said. “They’re more satisfied with the help they are getting from their social-support networks.”

Each person with Alzheimer’s disease has a different temperament, Geldmacher said.

“For someone who has always been passive, calm, and quiet, we often see that become more pronounced,” he said. “Our own personalities frequently become more strongly expressed as part of the disease, but environment [also plays a role].”

People around a patient often can dictate a patient’s behavior, Geldmacher said.

“Many years ago, I had a patient who I asked the day of the week, and he got it wrong. His wife leaned in and said, ‘What are you, stupid? I just told you the day on the way in today.’ Well, if my wife spoke to me in such a way I might become agitated myself, even in my current state, and that’s what his response was—he got angry and agitated. It wasn’t the question that did it. It was her response to his lapse. He didn’t choose to get the answer wrong. It wasn’t voluntarily. He literally did not know.”

What many people don’t understand, Geldmacher pointed out, is that “she could have coached him from here to Kingdom Come, but because he could not make new memories, he would not be able to remember the coaching. He could not remember the day when the question came up. She wanted him to do well on the testing, and when he didn’t she was angry and frustrated. Environment has a lot to do with how people behave.”

Geldmacher is currently looking at ways to teach caregivers how to alter their behaviors to get patients to be less defensive or aggressive in response to certain actions.

“So, if the caregiver wants someone to bathe, how do we get someone to bathe without triggering a fight, essentially?” he said. “We’re doing a research study on whether or not we can coach folks to reduce agitated behavior and improve the quality of life for the family by that kind of coaching.”

It’s important for caregivers to be open to help, Clay said.