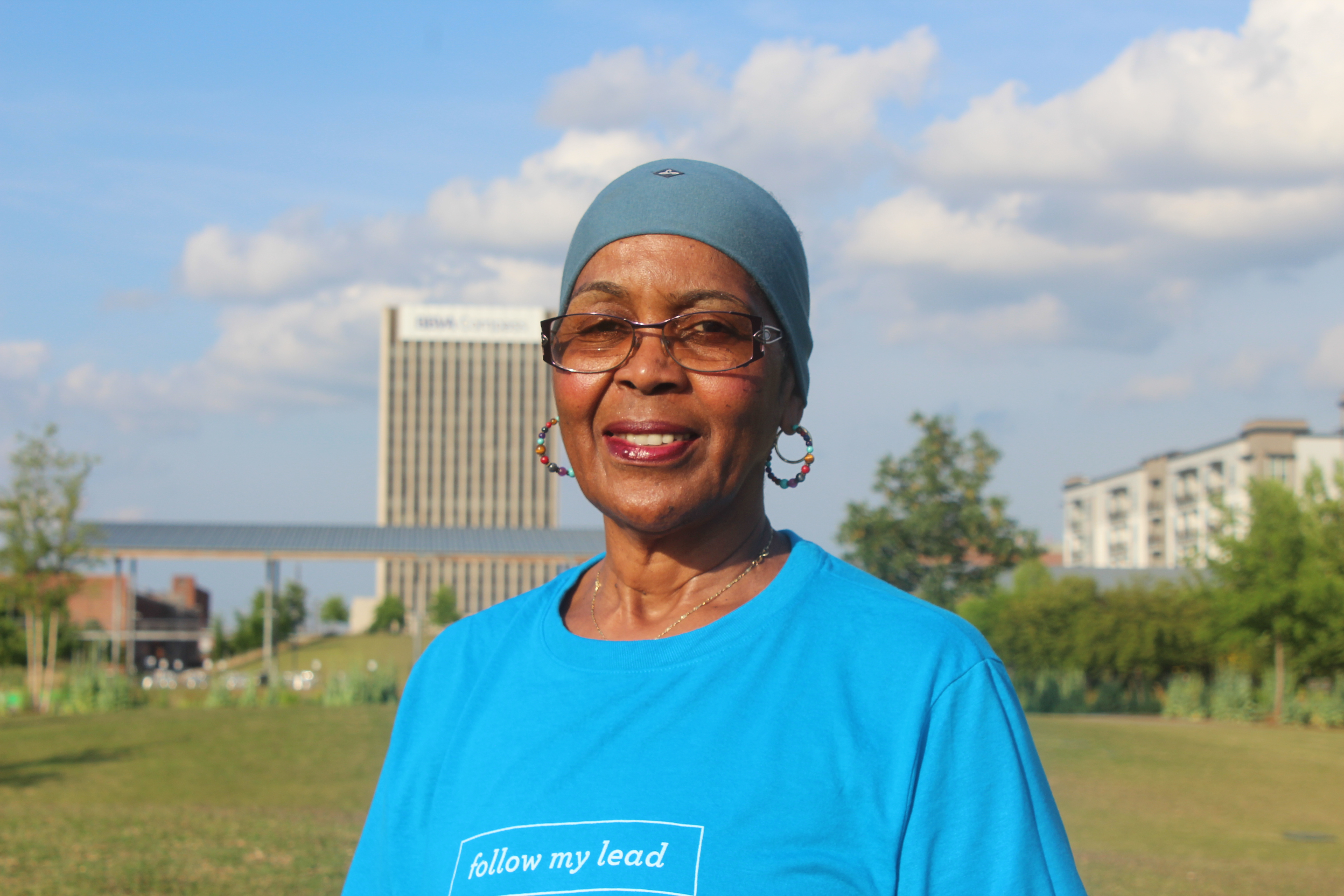 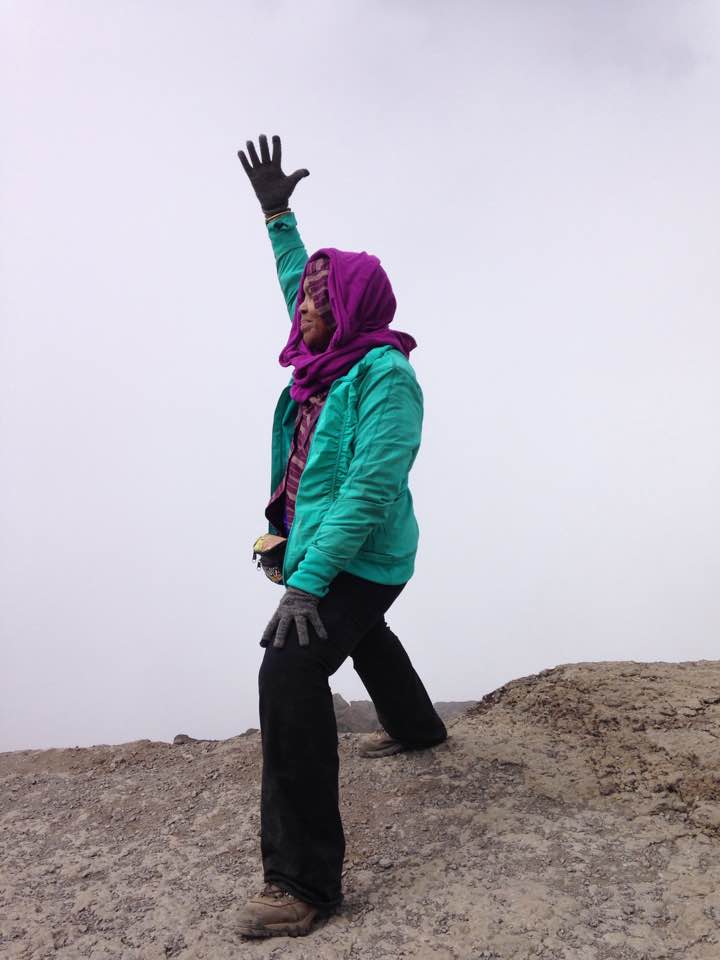 “The last thing on my [bucket] list was to challenge myself physically,” Muhammad said. “When I turned 70 I [wanted] to do something in Africa that would challenge me on the physical level.”

Muhammad decided not to wait. “‘Why would I wait until I’m 70?’ I’m getting older and these things start happening to the body and you start aging, so I decided to do it now.”

The climb was harder than expected.

“I wanted the physical challenge, the mental challenge and climbing Kilimanjaro is both of those; it’s actually more mental than physical,” she said. “A lot of endurance, but it really showed me my strength.”

Muhammad – a yoga instructor, community activist, performing poet and passionate speaker – is known as Mama Sanovia or Sister Sanovia. Those who know her gave her the strength to ascend the mountain.

“It connected me with all the people who wanted me to be successful,” she said. “I had affirmation cards that people had written. So every time I was a little down or thought I couldn’t do it, I would pull out one of those cards and read what they said.”

Muhammad was part of a crew that included one guide and 12 porters who transported the equipment during the journey. They climbed for seven and eight hours each day before camping to rest. The fourth day was particularly hard for her, she remembered.

“People do die on the mountain because of the altitude, so the breathing becomes a real issue when you elevate that high. When you climb slowly, your body acclimates and prepares you to go higher,” she said. “On Day Four my oxygen level was about 70 and my heart rate was high. I was breathing shallow and I thought that I could die.” 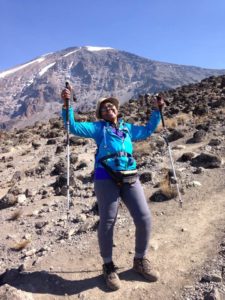 Muhammad said she recited the “Now I Lay Me Down To Sleep” prayer and then an Islamic prayer. “I thought, ‘wow if I don’t wake up that means I don’t have to finish this hike. And I started laughing to myself and cuddled up. I woke up the next morning and that day was the most amazing. We went to a height that was narrow so you could see yourself at the edge of the mountain and I started doing yoga on the mountain and playing around, it was an energetic day.”

Making it to the summit and climbing through four different climates were amazing she said. The eighth and final day of the ascent was Muhammad’s birthday, and she had been feeling sick from the climb, but making it to the top gave her energy.

“When I could see the end, I had about a block or two – in terms of how far I had to go to make it to the summit – and I’m walking and breathing, I’m nauseated and I’m trying to get there,” she said. “And the most amazing thing was, when I got there, and I saw (the sign) ‘Stella Point Congratulations’ I had so much energy . . . it was amazing to make it.”

Now that she’s accomplished that goal, what’s next?

“There’s a mountain in Peru that I might add to the list,” she said. “But right now I’m pretty complete.”

Muhammad – who grew up in Ensley, but moved to Harlem at 15 and back to Birmingham as an adult – has always loved the relationship between mothers and babies which is why she became a nurse. Muhammad said she has delivered “a lot of babies over the years,” and “six from my own womb.”

She was a nurse for 30 years – 10 in New York, and 20 at the University of Alabama at Birmingham – before retiring in 2011. After retiring, she became a certified yoga instructor.

Many people who know Muhammad describe her as a peaceful.

I’ve always been pretty laid back,” she said. “These things that have happened in my lineage have caused some nervousness, some not feeling peaceful. However, I knew it was against my nature, this energy of violence, wanting to fight back or lash out, or being vengeful. That wasn’t good in my spirit and I was aware of that.”

In 2000, Muhammad got into yoga after her daughter, who was 25, was killed in a car accident.

“I had gone to a few yoga classes, but it wasn’t in the spiritual context of yoga,” she said When tragedy happened, it motivated me to get out of grief.”

Muhammad practiced yoga on a spiritual level, and discovered it was something she wanted to teach others. However, it wasn’t until her mother was killed when Muhammad took a trip to Bali, and discovered her own inner peace.

“I didn’t like the energy, I knew I had to get out of the environment (Birmingham),” she said. “So, I went to Bali which is where the healing cemented itself. I really immersed myself in the breathing traditions. It gave me a chance to practice healing.”

“We all have a human spirit that is loving and kind and these events take us out of that energy,” she said. “Once we connect with the real energy of who we are then we begin to be in that process all the time.”

Muhammad is also a published author whose first book, “A Journey to Forgiveness: Disowning Three Generations of Domestic Violence” details many of the challenges she and her family have faced.

The book is about three generations of rape and violence in her family: her grandmother’s, her mother’s and her own.

It’s about those misfortunes and “about love and forgiveness,” she said. “The ability to heal after trauma.”

The book tells about her grandmother, Pearl Jackson, who was on death row in prison for a murder she did not commit. While in prison, Jackson was raped and impregnated by the warden with Muhammad’s mother.

“They said she was part of an ax murdering serial killing gang and that she had killed a white man,” she said.

The book explains also that Muhammad’s birth is also a result of rape.

“These stories are about how the violence affected me, and how I got out of violence,” she said.

Muhammad said the book was written with the help of an incredible support group.

“At points when I was like, ‘I really might not be able to finish this they would hold that for me in a positive way, and encourage me,” she said.

While writing about her rape Muhammad said a friend told her to take as long as she needed to write.

“’Nobody is putting you on a timeline, so don’t worry about it. When you’re ready you get back to it,’” she said quoting her friend. “It really freed me up to take the time I needed.”

Since publishing the book in November, Muhammad said many readers have connected with the book because they could relate to it.

“So many tell me that it’s their story as well,” she said. “So many pieces of it is the life they’re living.”

One of her goals is to go into schools.

“I want to talk about this in a safe space about the violence,” she said. “Even men. One brother raised the question, how do we talk about this with men? How do we stop that violence?”

Muhammad, who has five adult children, four boys and a girl, said she thinks her children are “still absorbing everything.”

“My daughter said, ‘I can only read that book in little pieces; it’s too much,’” she said. “My sons haven’t really responded, so I’m just waiting to see how they feel. I think with children to see their mother open is a lot. We’ll all be getting together around Kwanzaa so I’m sure we’ll be talking about it.”