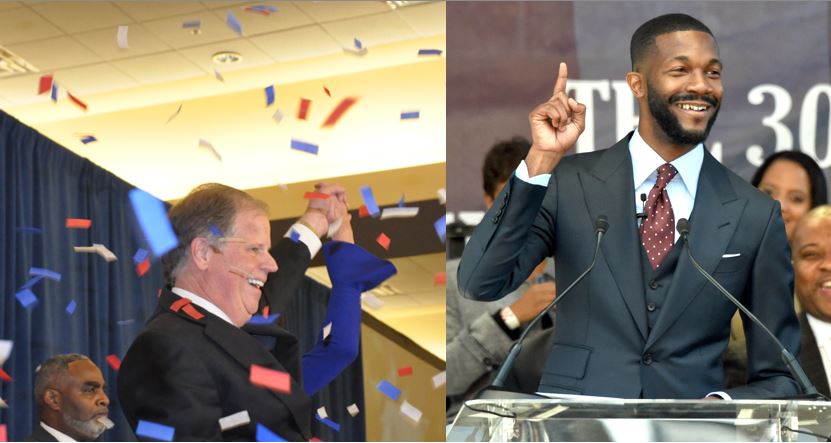 A new mayor in Birmingham. A Democrat elected to the U.S. Senate from Alabama for the first time in more than two decades. A national monument designation for the Civil Rights District. These were just a few of the newsworthy events in the Magic City in 2017. Here is a closer look at those and other significant events, in no particular order.

After being elected the youngest mayor in more than a century, Woodfin told a cheering crowd at his watch party at Haven in Lakeview, “Birmingham, this is our moment. For the last year and six weeks we have been on a journey not for what’s in my interest but for what’s in our interest. This is a we-us-and-our moment.” Bell, more than a month later in his farewell to the City Council at City Hall said, “I walked into this building with my head held high, and I am going to walk out with my head held high.”

In the special election for the Alabama U.S Senate seat left vacant when Jeff Sessions assumed the role of U.S. Attorney General, Democrat Doug Jones, a former U.S. attorney, defeated Republican Roy Moore, a former state supreme court chief judge, 49.9 percent to 48.4 percent. It was the first time in 25 years that a Democrat was elected to the U.S. Senate from Alabama. Jones is expected to take office on Jan. 3, 2018.

Jones faced an uphill battle, but that changed when Moore was accused of sexual assault and other misconduct by multiple women, accusations Moore vehemently denied. With an embattled Moore campaign clouded by controversy, Jones ran a masterful race with extensive outreach to the black community that emphasized his role prosecuting the Klansmen who took the lives of four little girls in the 1963 Sixteenth Street Baptist Church bombing. The hard work paid off: exit polling found that 97 percent of African-American women voted for Jones, and more than 90 percent of all black votes went to the democrat.

In August, the AGGBGC, founded by legendary Birmingham businessman Arthur George “A.G.” Gaston in 1967, celebrated 50 years. The youth organization tutors, mentors, and helps more than 1,400 young people from Birmingham and Bessemer, encouraging them to become productive, successful adults who support their communities. Gaston stated in his later years that the club was the “brightest” moment in his long, illustrious career. AGGBGC CEO Frank Adams Jr. believes the organization’s next 50 years will be even better: “I’m hoping to see a level of impact that is clearly transformational and can be seen clearly by the community.”

In October, the Ruffner Mountain Nature Coalition marked its 40th anniversary. The organization, founded in 1977 when a small group of individuals decided to save a mountain threatened by deforestation and development, has worked to grow the area from a few acres to more than 1,000. Today, Ruffner is one of the largest privately held urban nature preserves in the U.S., and over the past four decades it has become a gathering place for many in the Birmingham area. Ruffner Mountain Executive Director Carlee Sanford said, “A misconception is that the reason this is here is because some agency or federal government came in and saved this land. That’s not what happened. It was people caring, … small groups saving four acres, five acres, 20 acres at a time.”

In November, the BCRI turned 25. During the annual Fred L. Shuttlesworth Human Rights Awards Dinner the Institute honored former Birmingham Mayor Richard Arrington Jr., the city’s first African-American mayor; and activists Harry Belafonte and Viola Liuzzo (the latter honored posthumously). Arrington said establishment of the BCRI was a priority when he was first elected to office in 1979 and put together a 21-member task force that eventually led to founding of the BCRI. Since its opening, more than two million have visited the Institute, and its role today is more important than ever. BRCI President and CEO Andrea Taylor said, “Almost everyone would agree that this is a very challenging and troubling time in our history. We can play a very important role by providing a place where people can gain factual information and share dialogue; by providing a place where people have an opportunity to interact with different people by building coalitions; and by providing a place where people can continue to learn, share, and grow in an increasingly complex society.”

Controversy over monuments that pay homage to the Confederacy swept across the nation and in Birmingham, as well. In downtown Linn Park, former Mayor William Bell covered a Civil War monument while the city’s law department examined whether to remove the landmark. Former City Council President Johnathan Austin urged removal of the monument, saying Dr. Martin Luther King Jr. sat in a cell not far from City Hall and instructed citizens about “the importance of identifying and defying unjust laws.” The state filed suit against the city, stating that it violated state law by constructing barriers to deliberately obscure a historical monument. The monument remains covered up today.

Two announcements in September were among highlights of the year in Birmingham business: commercial truck producer Autocar expanded and opened a $120 million plant in Pinson Valley, not far from where auto supplier Kamtek opened a $60 million expansion.

Hagerstown, Ind.–based Autocar announced that it will expand and open a manufacturing plant in Jefferson County to build its heavy-duty cab-over-engine trucks. The company, the oldest motor vehicle brand in the United States, will create more than 700 jobs with its expansion. The deal was consummated with assistance from former Birmingham Mayor William Bell, who had to think beyond the city’s limits. Birmingham Business Alliance (BBA) President and CEO Brian Hilson said, “The existing facility Autocar acquired was physically located in the city of Center Point. But, because there are so many employees (746), the land around the building facilities was not sufficient for all the employee parking, truck maneuvering, and so on.”

Kamtek, an operation of international automotive supplier giant Magna, officially opened its $60 million aluminum-casting plant, bringing a new capability that is in high demand as the automotive industry seeks to make lighter cars while retaining strength and safety. The company added high-pressure vacuum die-casting to its existing stamping and assembly operations in Birmingham’s Pinson Valley. The nearly 150,000-square-foot plant will eventually employ more than 100 workers.

In other Birmingham business news:

In May, Lisa Herring, EdD, took over as superintendent of Birmingham City Schools after a contentious search. The previous superintendent, Kelley Castlin-Gacutan, was fired, and her replacement, interim Superintendent Larry Contri, was placed on paid leave after Herring was hired. The search drew criticism from some board members because no internal candidates or Alabama residents were selected as initial finalists. One finalist withdrew citing “the political climate and controversy.” The Birmingham Federation of Teachers, part of the American Federation of Teachers, filed a lawsuit over expenses for the search. Nonetheless, Herring—who served as chief academic officer with the Jefferson County Public Schools in Kentucky before her move to Birmingham—remained positive: “My intent is to build strong relationships with our board,” she said during a 15-minute press conference inside the auditorium of the Central Office in downtown Birmingham after she was selected. “My vision is a reflection of [the board’s] vision, and our vision is a reflection of the community.”

Despite a late-December loss in the Bahamas Bowl, the University of Alabama at Birmingham (UAB) football team recorded a successful season that included head coach Bill Clark winning several national Coach of the Year honors. UAB finished 8-4 overall and 6-2 in Conference USA (C-USA), a program record for league wins.

After a two-year hiatus, the Blazers returned to action on Sept. 2, 2017, with a 38-7 victory over the Alabama Agricultural and Mechanical University Bulldogs in front of a school-record crowd of 45,212 at Birmingham’s Legion Field. The team was led onto the field by Birmingham’s Tim Alexander, a graduate of E.B. Erwin High School and the first paraplegic to ever get a scholarship in Division I football. Alexander became the face of the student movement to reinstate UAB football. “I’m forever grateful for this university and the football program,” said Alexander in an interview with UAB Magazine. “I’ve grown a lot by being here and being around this football team. The team taught me how to be a man and how to demand excellence in myself.”

Clark was named Coach of the Year by CBS Sports and was awarded the prestigious Maxwell Football Club’s Thomas Brookshier Spirit Award for his courage, leadership, and outstanding effort this season. Maxwell Football Club Director Mark Wolpert said, “There’s really no historical comparison for what Coach Clark and his staff have done this year, guiding a program out of dormancy and into a bowl game in just one season.”

As one of his last acts in the Oval Office, President Barack Obama signed an executive order in January establishing the Birmingham Civil Rights National Monument; the area will include the A.G. Gaston Motel, the Sixteenth Street Baptist Church, Bethel Baptist Church, the Birmingham Civil Rights Institute, Kelly Ingram Park, the Fourth Avenue Historic District, and the downtown Masonic Temple building. The order came four days before Martin Luther King Jr. Day observances and eight days before Obama—the first African-American to serve as U.S. President—completed his second term. “These monuments preserve the vibrant history of the Reconstruction Era and its role in redefining freedom,” said Obama. “They tell the important stories of the citizens who helped launch the civil rights movement in Birmingham and the Freedom Riders whose bravery raised national awareness of segregation and violence. These stories are part of our shared history.”

Former Birmingham Mayor William Bell, surrounded by foot soldiers and other civil rights activists inside the Sixteenth Street Baptist Church, was in a “joyous mood” when he said, “I understand the struggles that had to occur for this day to get here. When I say struggles I’m going all the way back to the marches that took place in Kelly Ingram Park and the streets of Birmingham, and the fact that Dr. King came here. My heart is overflowing with joy and happiness that on this day this president has acknowledged that so many people made sacrifices for all of us, including him, and that this community should be recognized as part of the National Park Service’s monument program.”

The Jan. 21, worldwide Women’s March was the largest single-day protest in U.S. history. The event advocated for legislation and policies regarding human rights and a broad range of issues, including racial equality; reproductive, worker’s, and LGBTQ rights; and immigration and health-care reform. It also targeted many of President Donald Trump’s positions during the 2016 presidential race.

In Birmingham, thousands assembled at Kelly Ingram Park and marched through downtown in conjunction with the main march in Washington, D.C., and “sister marches” in cities throughout the United States and around the world. Another rally at the Birmingham-Shuttlesworth International Airport against the President Trump’s immigration ban also drew thousands of participants in total.

After serving as Birmingham’s police chief for a decade, Birmingham Police Department (BPD) Chief A.C. Roper on November 8 announced that he would not reapply for his position; he will continue to assist newly elected Mayor Randall Woodfin as the search for a new police chief begins. In a statement, Roper said, “Several weeks ago, all department heads were given a choice to apply for reappointment to their positions. However, after a considerable amount of prayer, my family and I decided I would not submit a resume for consideration.”

Roper was assistant chief of the Hoover Police Department when he was named by former Birmingham Mayor Larry Langford to succeed BPD Chief Annetta Nunn. Roper was sworn in at the Birmingham Museum of Art on Nov. 30, 2007.

Other News of Note