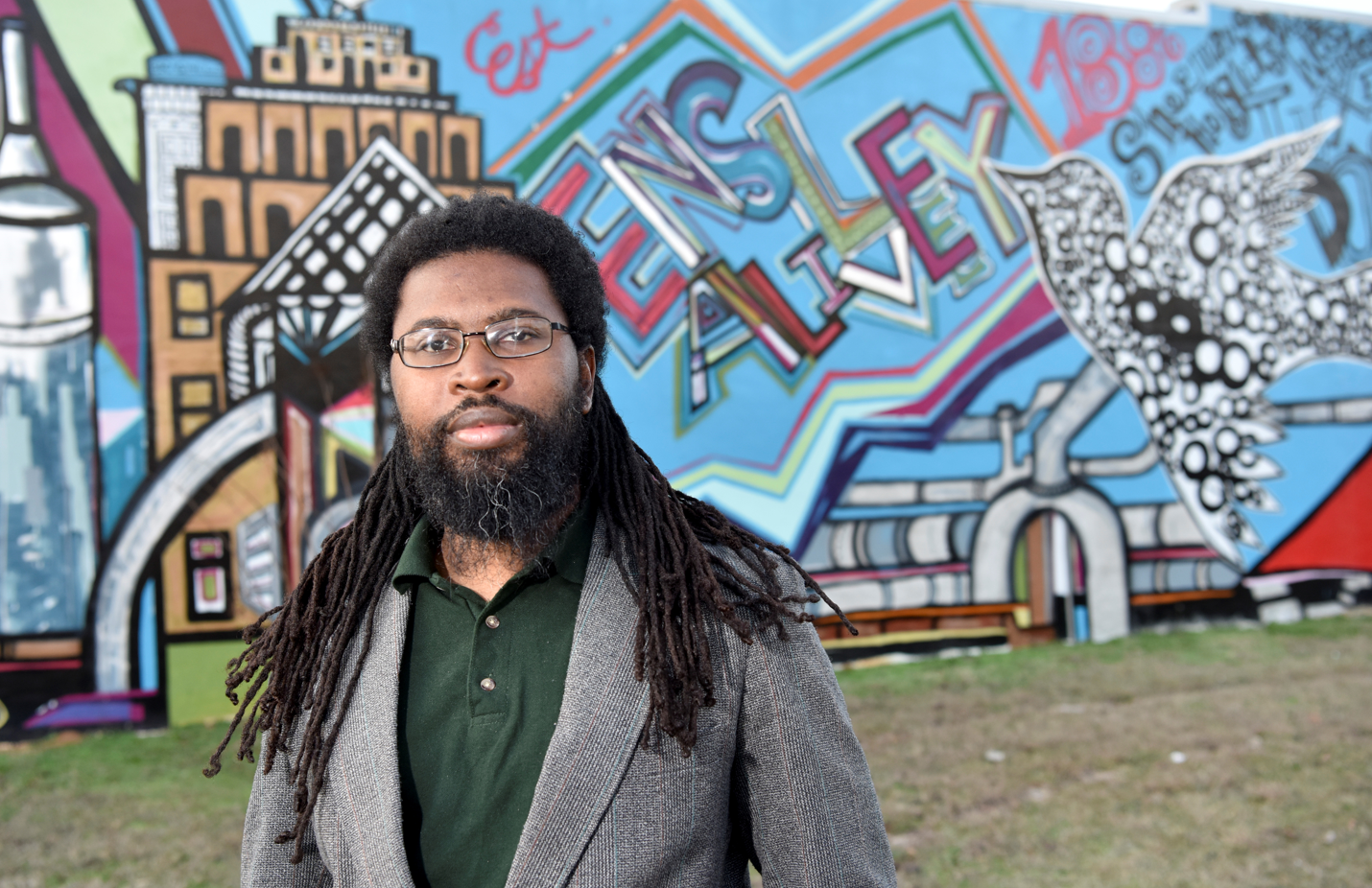 Brian “Voice” Porter Hawkins has never been bored in his life.

“There’s just too much stuff to do, even if it’s just sit and think,” he said.

Whether painting, poetry, or music, he has always found a creative use of his time and talent.

Hawkins’ skills are multi-faceted. He began painting murals with the Birmingham Museum of Art at age 11. He is vice president of a group comprised of artists, art organizations and art lovers. He hosts open mic events across the city including the popular monthly event Bards & Brews at the Birmingham Public Library. He assists with community development at the Norwood Resource Center and the Color Project Ensley, which is part of Ensley Alive. He is also a certified master gardener.

Poetry earned him his nickname.

“I was doing an event in Starkville, Mississippi many years ago, an elder was there and he heard me speak and when I got off the stage, he said ‘you just say whatever the hell you want, don’t you? You’ve got a free voice.’ The host heard it and the next time he introduced me, he introduced me as ‘A Free Voice’ and everybody just shortened it to Voice.”

Hawkins, who is originally from Warrior, Ala., moved to Birmingham when he was young. As a teen, his talent for poetry was noticed by an English teacher.

Before poetry, Hawkins would paint and sculpt. In fact, he painted murals with the Birmingham Museum of Art (BMA) from age 11 until he was 19 years old.

“Poetry stepped in during college in lieu of the painting because I didn’t have the materials,” said Hawkins who attended Mississippi State University. “Working with the BMA, they provided all of the materials. Canvasses become expensive and there were no other organizations like the museum that did community outreach like that. So, I turned all of my artistic expression into writing.”

Birmingham has some of the best artistic talent that Hawkins has ever seen, he said.

“I’ve travelled fairly extensively,” he said. “But Birmingham has some of the best raw and refined talent. The thing that Birmingham lacks in the art scene is representation.”

Hawkins is vice president of We Are Rtists (WAR) a group comprised of artists, art organizations and art lovers which teaches financial literacy to artists.

“Just educating artists on simple things like how to file income you made from selling art or performing,” he said. “People have romanticized starving artists, and it’s not cool. The world runs on art … but people don’t want to pay for art.

“They want to consume it and love it, but they don’t want to buy it. I want people to not just love the art, but to own the art. Take it home with them, buy albums and paintings and sculptures and paying to get into live events. If artists stop making art, it’d be a sad existence.”

Hawkins also hosts a number of open mic events across the city including the popular monthly event Bards & Brews at the Birmingham Public Library.

Bards & Brews is held the first Friday of every month, except December. Attendees can sign up to do original works of art, whether music, poetry, singing or any other creative talent, and sample beer from a craft beer company.

“Haruyo Miyagawa was a librarian at the downtown public library,” he said. “She was trying to find ways to get people back into the library because libraries across the country are losing people. She was running a poetry program for teenagers called ‘Word Up’, and she wanted adults to do poetry, and merge it with something adults like, and craft beer was blowing up, so she said ‘let’s do poetry and beer!’”

Local breweries and those from all over the country have had beer at the event including Cahaba Brewery, Good People Brewing Company, Avondale Brewery, Trim Tab, Druid City Brewing (Tuscaloosa), Band of Brothers (Tuscaloosa), Sweetwater (Atlanta) and Highland (Ashville, NC).

“The point isn’t just to serve local beer, it’s to try beers from all over the place. . . and to get people into the library,” he said.

Hawkins, who has traveled the country and performed in countless national poetry slams, does not perform at Bards & Brews.

“There are so many other talented artists out there who may not have the opportunity to have the stage,” he said, “especially one with 100-200 people in the audience. I can call someone and say, ‘let me be on stage,’ or ‘give me your stage,’ and they will. But most people don’t have that ability.”

There was one exception, however. During Bards & Brews at the Bessemer Public Library, no poets showed up, so Hawkins performed poetry for two hours.

“It was the night of a huge storm, and the only people who were there were the people already at the library,” he said. “There was a librarian who did a couple of pieces. Druid City Brewing provided our beer and we had a lot of it left over.”

Hawkins said Bards & Brews has helped at least one person move to Birmingham.

“A guy was from Maine and was trying to decide whether he would take a position here in Birmingham,” Hawkins said. “He was driving by at night and saw a bunch of people going into the library, and stopped and asked, ‘why is everyone going to the library at 6 p.m. He came and had a fantastic time.’”

The guy returned the following month.

Hawkins does community development with the Norwood Resource Center and the Color Project Ensley, which is part of Ensley Alive, a movement he is passionate about.

“Ensley Alive started as the media for Ensley,” he said. “Taking all of the things happening there – all of the positive things – and putting it out there. We created a Facebook page, Instagram, Twitter, just to get the word out about what’s going on in Ensley.”

“People hear negative things about Ensley all the time, so people have a negative perception about Ensley,” he said. “The perception problem is people believe it to be the entire west side of Birmingham when in actuality it’s just six small neighborhoods that are residential. Nothing really happens over there.”

Hawkins said the area gets a bad rap.

“Every neighborhood association meeting a police officer presents the crime statistics and they are almost always nil,” he said. “Zero this, zero that, zero, zero, zero. If there is a bump in that, the people of the community worry about it.”

Hawkins is also a certified master gardener. In Norwood, where he currently lives, he helps manage a community garden and helped create one in Ensley as part of the Color Project. The Ensley garden is now managed by Oasis Gardens Ensley.

The Color Project Ensley, a health initiative that helps combat the negative image in Ensley, is meant to affect the social, mental and physical health of the people in Ensley, he said.

“People often start with the physical health and that’s as far as they get. If we go through social health first – give people a place to congregate and meet their neighbors and reconnect – it directly affects the mental health of people.

“We go to work and home, and don’t really interact with each other, thousands of people are over there but everyone is alone, it can affect your mental health,” he said. “So, when you have people gardening together and going out and taking pictures in front of the mural and interacting, it helps your mental health.”

People begin to move in the space after their social and mental health have improved, he said.

“People are out gardening now, because they feel more comfortable,” he said. “They’ll walk to places, which affects their physical health.”

The Color Project is at 321 19th Street in Ensley. On the side is a colorful mural, painted by Ukuu Tafari which is so popular that people come from all over to take photos in front of the mural, Hawkins said.

“You have people out in a community that people claim is unsafe, waiting in line to take pictures,” Hawkins said.

To contact Hawkins for booking or more information about The Color Project, email him at voiceporter@gmail.com.