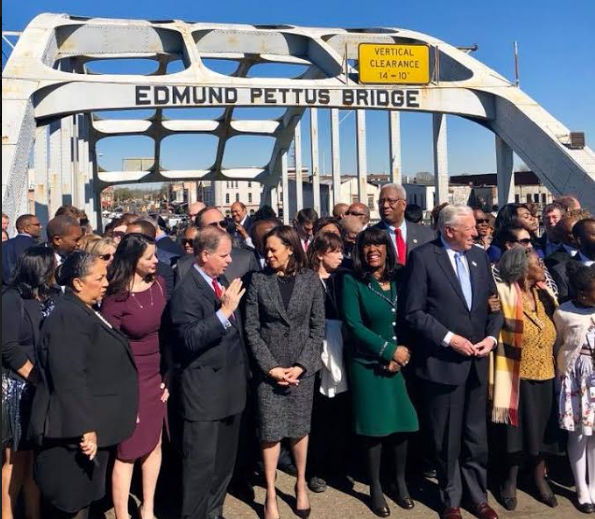 Thousands of people marched across the Edmund Pettus Bridge Sunday afternoon to commemorate the 53rd anniversary of Bloody Sunday — a day where marchers were beaten, tear gassed and trampled while fighting for the right to vote on March 7, 1965.

Sunday’s march marked 25 years since commemorations began in observance of the bridge crossing.

U.S. Reps. John Lewis of Atlanta and Terri Sewell of Birmingham delivered emotional messages during the commemoration of the bridge crossing jubilee to those in the audience, many of whom were not alive when the Voting Rights Act was approved by Congress decades ago.

Spectators unable to get into the crowded Brown Chapel AME Church watched speeches on a large monitor from the street in front of Brown Chapel.

Lewis and Sewell come from different age groups, but each stressed the importance what the Voting Rights Act of 1965 means to America.

“We’ve made some progress but we still have a distance to travel,” said Lewis, who suffered a skull fracture on the Edmund Pettus Bridge on March 7, 1965, when state troopers scattered 600 peaceful protesters, using clubs, tear gas and horses.

It’s a story that Lewis has told over and over through the years, but one that never seems to tire him out or bore listeners.

Expected To Be Arrested

Speaking at the church on Martin Luther King Jr. Street, Lewis recounted in great detail what he was wearing and what he brought along to eat and read as he began to walk toward the bridge.

“I was wearing a backpack and took along two books, an apple, an orange, a toothbrush and toothpaste,” he said.

He said he expected to be arrested and wanted to be ready in case that happened and he wound up behind bars once again for demonstrating.

Sewell grew up in Selma, and although she has since moved to Birmingham, she has always considered Brown Chapel to be her home church and she mentioned that Sunday morning.

She praised the “foot soldiers” who offered steadfast support for the voting rights campaign and said the end result was something “that changed the course of history.”

Sewell said the marches, beatings and arrests of 1965 have not been forgotten by those who took part in the protests.

She said Lewis has often said that “if you don’t think there’s been progress in this country, walk a mile in my shoes.”

‘The Spirit of History’

Sewell also indicated that Lewis has been fond of saying he hopes that civil rights activists are “touched by the spirit of history.”

“I also hope that my fellow (congressional) colleagues are touched by the spirit of history because we have the power to do something about injustices.”

During her comments, Sewell became emotional when she thanked Lewis for his contributions to civil rights gains.

As has been the case in past Bridge Crossing Jubilees, dozens of U.S. House and Senate members joined a large crowd for the annual event.

Marchers came from across the country to walk across the same bridge as the foot soldiers of the voting rights movement, who helped change history.

Vivianna Rodriguez came from Mobile, and this was her second time marching across the Edmund Pettus Bridge. Her first time was when President Barack Obama came to Selma in 2015 to commemorate the 50th anniversary of Bloody Sunday.

“It’s very breathtaking to cross the same bridge five feet away from John Lewis, and just being able to do this,” Rodriguez said Sunday after making it back across the bridge.

Rodriguez is part of the Alabama Coalition for Immigrant Justice, and for her, walking across the bridge was personal.

“For me it’s a little bit more personal just because of all that’s going on in politics right now with immigrants’ rights,” she said.

“This is very inspiring. The foot soldiers that did come out here and did the hard work, and also the ones who lost their lives, they laid down a great pathway for us as other activists. As our rights are being attacked, it gives us courage and inspires us to walk in their same footsteps because they paved the road.”

Shirley Gavin Floyd, from Birmingham, has been coming to commemorate Bloody Sunday for a number of years, said, “I make a point to come down here and enhance and promote civil rights here in Selma as well as in Birmingham,” Floyd said.

As she crosses the bridge, Floyd said feel the spirit of the many foot soldiers who fought for the right to vote.

“It means that the spirit of all those foot soldiers who crossed this bridge has not died,” she said. “When I step up on this bridge, I literally feel their spirit come up out of this concrete. When I come up on this bridge, it’s sacred, hallow ground for me, and it’s not to be taken lightly.”

Floyd marched Sunday with David Russell, who is also from Birmingham. Russell marches from Selma to Montgomery every few years.

“I’ve been marching since 1986. I’ve been involved in the movement for over 30 years, and it just means so much to me,” Russell said. “This is not just about marching across the bridge. It’s much bigger than that.”

This year’s bridge crossing not only commemorated Bloody Sunday, but it also payed tribute to the 50th anniversary of the death of Dr. Martin Luther King. Jr.

“It’s very meaningful to come back here, to come back to this historic site and be here with so many wonderful people. It’s a beautiful day here today in Selma,” Lewis said as he was surrounded by his peers, the Selma Times-Journal reported.

Lewis, then a young organizer, was among those injured then. That violence set the stage for the Selma-to-Montgomery march, which helped build support for congressional approval of the Voting Rights Act months later.

Sen. Kamala Harris from California, who spoke at the Martin and Coretta King Unity Breakfast, said she felt a mixture of emotions walking across the bridge.

“It’s bittersweet,” Harris said. “It’s sadness and pain at the thought of what they endured 53 years ago, but it’s also inspiration about again fighting for the best of who we are and honoring those who have been heroes and are still heroes.”