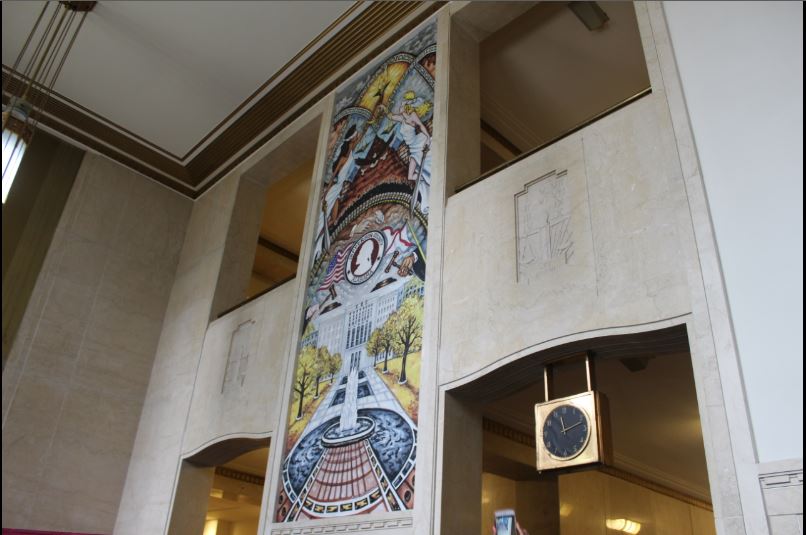 Dozens of residents, civic leaders and elected officials – including judges and area mayors – crammed the lobby in the courthouse as county commissioners and the artist, Ronald McDowell, who was commissioned for the work, unveiled his “Justice is Blind” mural.

McDowell said the painting took three years and he wants it to be representative of the times.

“I’m trying to leave something that reminds people what we can be and where we are today and what we can be in the future,” he said. “Equality and justice for all. Justice is blind.”

The old murals completed in 1932 “reflect a different time and a different place in our history,” said Commissioner Joe Knight. “They were created in the Jim Crow Era where the reasoning was such that it is no longer prevalent or acceptable in our society today.”

Knight and Commissioner Sandra Little Brown spearheaded the effort for the commission to get the new mural in place.

“We have come a long way and I am excited about this day,” Brown said. “We have been working hard to build consensus and trust in this county and with our citizens. This does not represent Democrats or Republicans, this represents the people. This about righting wrongs. There must be change. Everything must change; nothing stays the same.”

The commission authorized a study into the murals and selected Brown to form a citizens committee to explore options on what to do. The options were to remove; cover or add.

Hezekiah Jackson IV, president of the Birmingham Metro Chapter of the National Association for the Advancement of Colored People (NAACP) and a member of the committee said, “I think it’s a great balance to the two (murals) we have besides us . . . it’s a great statement to other people who are wrestling with these issues about the Confederate flags and monuments. I think this is a great compromise, that the story can be continued.”

Jefferson County Commissioner David Carrington, who turned 70 on Tuesday, said the new mural shows that the county can work together for all.

“I don’t like the word compromise. To compromise means that you gave up something you really believe in . . . I believe in consensus. I believe we can sit down together and take a path where we can move forward.”