For the past 10 years, Brett Oates has been able to turn his love of sports into something that benefits the community.

The 55-year-old founder of Silver Glovez, a nonprofit organization that serves as a showcase for high school baseball players will hold its 10th annual baseball camp on July 16 and 17 at Rickwood Field.

While working as a coach, he saw major differences between the two schools particularly with resources which inspired him to begin Silver Glovez.

“When I was coaching at Parker, seeing all these guys that were sitting around the city and weren’t getting the opportunities that I knew who could play at the college level,” he said. “Before this, we would literally put them in our cars and take them places. I’ve taken them to Grambling State University, down to Alabama State University, we’ve gone to Tuskegee University and other places.”

Oates said he wanted kids at Wenonah and Ramsay [High Schools] to get the same opportunity. “That’s when I started talking to coaches and they said if you bring them to one spot and get a date and make sure everybody’s clear on that day and that’s how it got started.”

The “one spot” was Rickwood Field and the baseball camp became the showcase, he said. The first year nine guys showed which has now grown to more than 65, Oates said.

Oates has always been a sports guy. Since childhood, he has participated in just about every sport imaginable.

“I’ve always been around athletics,” he said. “My dad (John) was an All-American baseball player (at University of Maryland Eastern Shore in the 1950s) and I can’t remember a time where we didn’t have footballs, basketballs, or baseballs or any athletic equipment around the house. I played from hockey to tennis to baseball, we did it all. We rode bikes, we would go to the Brandywine River in (northern Delaware) and hike around there as kids, so I was always in all types of sports from lacrosse to football to track; I did it all. I wasn’t very good at all of them, but I did it all.”

Though he played many sports, Oates said he favored baseball, having played since he was a small child in the sandlot while growing up in Wilmington, Delaware.

“I did Little League around 7 or 8 years old, then I moved into pony league, I played in the Catholic Summer League and went from there and did Summer Babe Ruth League and from there I went into college my freshman year at Grambling. I came home and played semi-pro with the Parkway Phillies,” he said.

Oates had another love while growing up his with his older brother, Vern and younger sister, Karla: broadcast television which led to a 17-year career. He would watch the news and his mother, Cynthia, encouraged him to try television.

Attending a technical school “I was really interested in doing [work] like refrigeration and air conditioning and that’s what I was leaning towards,” Oates said, “my mother was like, ‘why don’t you try TV, you’re a pretty good writer . . . I got more exposed to it and it took off from there,” he said.

He attended Howard High School of Technology in Wilmington, Delaware where he got his start working with the television and radio station at school. After graduation, he attended Grambling State University where he worked at the school television station and majored in mass communications.

He went to work with a station in Philadelphia where he covered sports sparingly, he said, with the ABC station in Philly. “I would cover the post-game press conferences, but I always covered politics and when I first started I was a sound tech with the TV crew,” he said.

He has worked as a reporter and assignment editor for ABC 33/40 in Birmingham as well as an anchor and reporter for stations in Mobile, Albany, Georgia and Alexandria, Louisiana and as a group sales manager and premium sales manager for the Birmingham Barons.

Oates and his wife Faye, who works at the Birmingham CrossPlex, have been married for 20 years and they have two children, Taylor and Miles.

Oates said he is excited by the upcoming camp.

During the first day, players from 9 to 12 grades and up to junior college get instructions from college coaches and league scouts who teach players how to improve their skills, technique and knowledge of the game. On the second day, players break into teams and compete in a game, to show what they’ve learned and have scouts and coaches evaluate them.

Silver Glovez does not just focus on the athletics, but on the academics as well. Coaches talk to players about the importance of having good grade point averages as well as high American College Test (ACT) scores. The organization also offers ACT Prep to help athletes with their scores.

“[The athletes] are getting exposure that they would not have gotten and had not gotten before, so they’re going away to play college baseball, it’s helping them pay for schools and they’re getting their degrees,” Oates said, “whereas 10 years ago we were struggling with that, particularly with inner city kids, because college baseball coaches don’t have the same budget as football or basketball.” 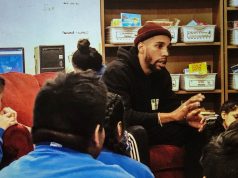