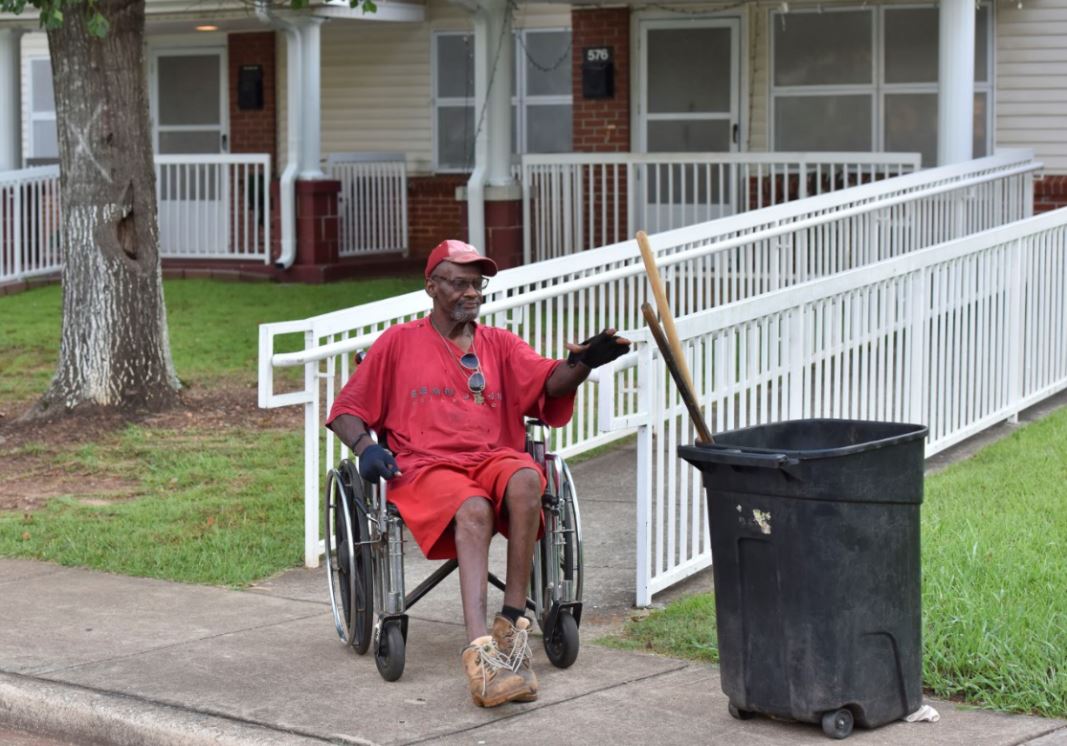 The Russell B. Harris Homes in Gate City are quiet around 6 a.m. on a recent Tuesday. There are a few cars traveling along Brussels Circle — the street that encompasses the small public-housing community — and only the far-off whirring sounds of vehicles on the interstate, the rumbling of a nearby train, and the “swish, swish, swish” of a broom against asphalt break through the morning silence.

Resident Clover Lee Moore is up at this early hour and he is making the “swish, swish, swishing” sound. The 63-year-old wields a broom in one hand and a black garbage can in the other—all while rolling along in his simple black wheelchair.

“I am just putting my Christian faith to work,” he said of his efforts to clean and beautify his eastern Birmingham neighborhood.

Moore has been cleaning up around Harris Homes for 22 years, practically since the first day he moved into his apartment. He is out every day sometimes picking up trash and sweeping. When it is hot, he gets out early in the morning to work. When it is cold, he is still sweeping. He works on any day he needs to, including some Sundays.

Moore is not paid to clean his neighborhood. He said he does it for God and to help his neighbors.

A Promise to God

Moore said he made a pact with God when he moved to Harris Homes in 1996.

A year earlier, Moore had a stroke and had spent two months in the hospital. When he left the hospital, he was confined to a wheelchair. He moved in with his sister, who helped him find an apartment when he was strong enough to live on his own. He said then that he talked to God and vowed to do whatever God told him to do in return for sparing his life. The day he moved in, Moore said God provided a broom.

“I am here because of the grace of God,” he said. “He has blessed me.”

Moore said he rarely gets sick, so he is able to go through the neighborhood several days a week picking up trash. He does not have a set schedule; he just watches the streets to see what needs to be done. The Fourth of July, he said, created a problem he has discussed with his neighbors for years: fireworks, which the neighborhood kids enjoy.

“They like to hear the sounds, but when they are done they just leave them in the street,” Moore said.

When picking up the debris left behind, he said, “I just try to be conscientious.”

Moore likes to help the maintenance team that services Harris Homes. They stay busy keeping the apartments in order, but they are told not to go into people’s yards to pick up trash. So, Moore focuses on keeping the yards and streets clean with brooms often given to him by the maintenance crew.

Neighbors seem to appreciate the work Moore does.

“Some of them say they are happy that I clean up around here,” he said. “Some tell me they would not do it if it were them.”

Moore doesn’t expect to be paid for his work, but he welcomes some recognition for his efforts.

Donations do, however, bring a smile to Moore’s face. He sees them as a signal that he is doing something right, and that inspires him to keep on going.

“I am doing this out of love for my community and for God,” he said.